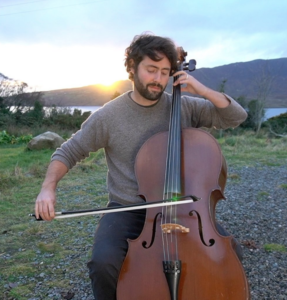 Patrick Dexter has been keeping his followers entertained throughout lockdown with regular performances. Now he is hoping to find two new fans in Taoiseach Micheál Martin and US President Joe Biden

A Mayo musician has been invited to play in an upcoming St Patrick’s Day programme for Taoiseach Micheál Martin and US President Joe Biden.

Patrick Dexter, a cellist who is based in the Westport area, announced on social media this morning that he has been invited by the Embassy of Ireland in the USA to play virtually as part of the proceedings.

Dexter, who described the invitation as “such a great honour”, will be the only Irish based artist to feature as part of the St Patrick’s Day programme.

Patrick Dexter has built up a dedicated audience during the pandemic who tune in to hear him play the cello against a beautiful west of Ireland backdrop on a regular basis. He has played covers of traditional Irish songs, classical pieces, iconic movie scores, more contemporary pop music covers as well as many more.