Covid-19 latest data: How many cases are there in your local area? 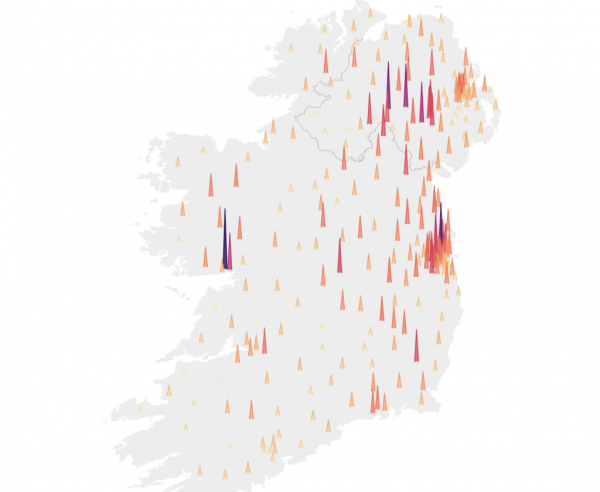 An area of Galway city had the worst coronavirus infection rate in Ireland over the past two weeks, new figures show.

Galway City Central recorded 951 cases per 100,000 during February 2nd to 15th, more than triple the national average of 269. This has increased from last week when the area had a rate of 382.

Swinford, meanwhile, is the worst-hit electoral area in Mayo at present, with 62 confirmed cases over the same period, giving it an incidence rate of 358.7 cases per 100,000 which is marginally worse than Castlebar where the 107 positive cases of coronavirus equates to an incidence rate of 356.8 per 100,000. Claremorris recorded 88 cases in the same two weeks, with the figures for all three areas above the national average.

Westport has recorded 43 cases and Ballina and Belmullet 27 and 19 respectively.

The next worst-affected area on the island was Ballymun-Finglas in north Dublin, with an infection rate of 820.

In Northern Ireland the BT70 postcode saw the highest rate of new infections – 161 people tested positive for the disease over the two-week period from February 1st to 14th.

That amounted to a rate of 742 cases per 100,000 people in the area, which covers Ballygawley in Co Tyrone.

Killaloe in Co Clare was the area with the lowest rate of infection in the Republic, reporting 35 cases per 100,000.

In the North, the BT55 postcode in Co Derry recorded only four cases during the 14-day period, giving a rate of 49.

This comes as the head of the HSE said the pace of exiting this wave of coronavirus was going to be “a lot slower than the scale and pace than we entered it” because the virus was still transmitting at a “very risky level” across the community.

Paul Reid said people with Covid-19 were presenting much sicker to hospital and that once admitted they were staying longer in hospital and intensive care than in previous waves.

Meanwhile, Taoiseach Micheál Martin said the reopening of schools will be on a phased basis and likely start from March 1st.

Mr Martin said the “indications” are that it will likely be at the beginning of March during a radio interview on Thursday morning.

But Leo Varadkar said the date has not yet been formally approved by public health officials.

“If we have learned anything from the pandemic in the past year, it is that nobody can give a guarantee or offer absolute certainty,” Mr Varadkar told the Dáil.

Northern Ireland’s lockdown has been extended to April, but some primary school pupils will return to class on March 8th.

The Stormont Executive is expected to keep the current restrictions in place until April 1st. They had been due to lapse on March 5th.

Only vulnerable children and those of key workers have been in classrooms since January.

On March 22nd, secondary pupils in key exam years – year groups 12 to 14 – will return to school.