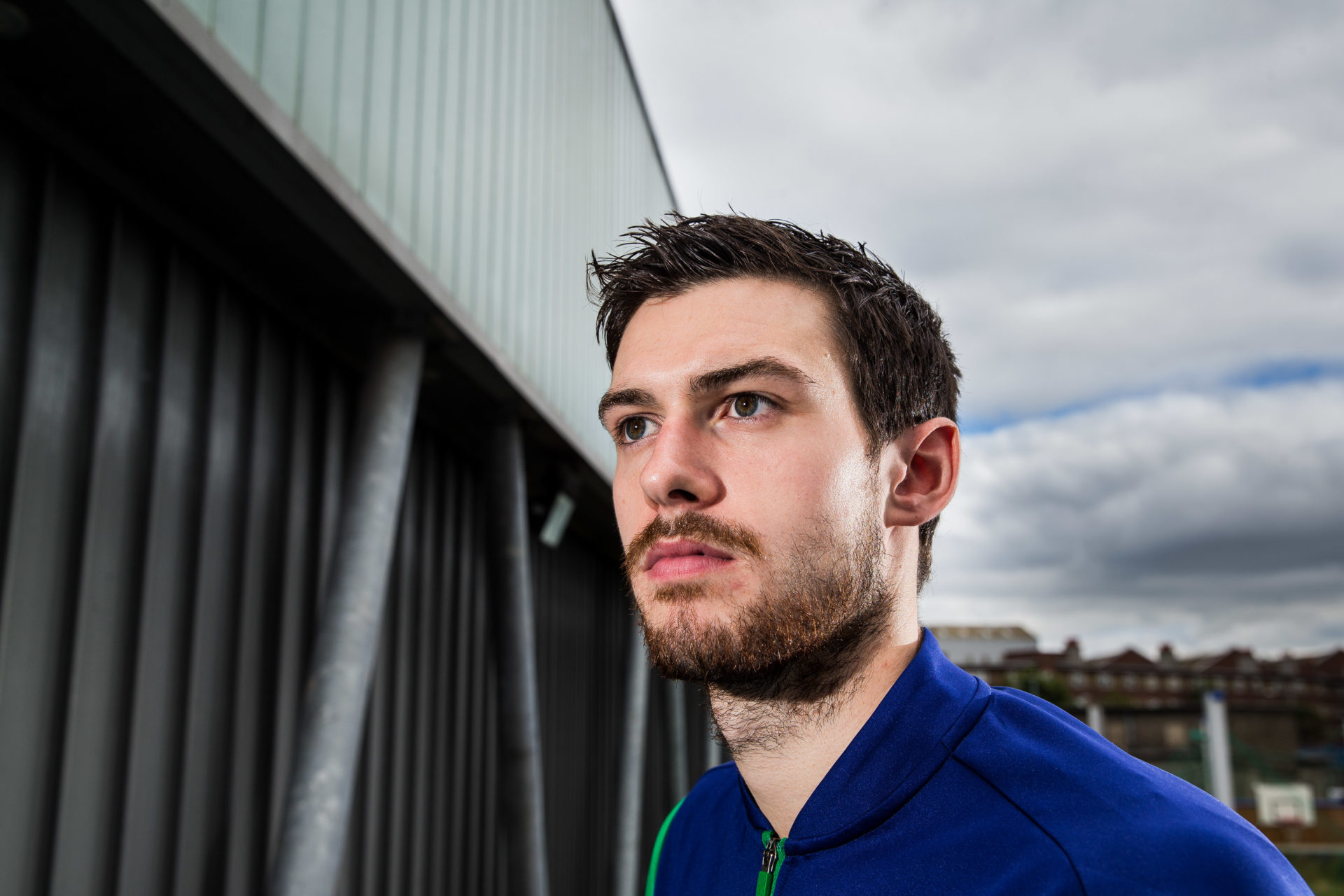 Castlebar native Nicholas Quinn is getting ready for an attempt at qualifying for his second Olympic Games. Picture: INPHO/Gary Carr

Just under a year ago, when the Covid crisis first struck and the shutters came down, Nicholas Quinn honestly believed his competitive swimming career might have come to its end. The 2020 Olympics, the singular goal toward which he had been working, were pushed back by a full year. The competitions and meets that sustained and justified his training were cancelled, instantly and en-masse. The Castlebar native and 2016 Olympian was left treading water.

Wind the clocks forward 11 months or so, however, and Quinn is a man with a renewed sense of purpose. The Olympic Games begin in Tokyo in July and he plans on being a part of them. At the moment he is deep in training in Edinburgh, putting the final touches to his degree while readying himself for an attempt at the magic number of 2.10:35 – the Olympic qualifying time for the 200m breaststroke.

“I’ve been lucky enough,” he says of training his way through the UK’s lockdown levels. “The group that I train with got an elite athlete exemption so I’ve been able to train fairly consistently for the last couple of months. Different things do change as you go in and out of different levels of lockdown but in general, I’ve been able to have a pretty consistent block of training since September.

“There have been disruptions but you just have to overcome them. You find a new rhythm and just go with it. That’s probably the biggest thing that these last few months have taught me, that there are some things you just can’t control and you just have to be adaptable, to move and change and go.”

Naturally, there remains a huge amount of uncertainty about the months ahead. There is still no guarantee that the Olympics will go ahead at all, despite the IOC and the Japanese authorities’ apparent determination to proceed through hell and high water. Quinn hasn’t raced competitively since last March and he still doesn’t know precisely when he’ll race again.

“In September 2019, I could tell you everything I was going to be doing, every competition I was going to, for the next seven or eight months. I can’t tell you what I’ll be doing in two weeks at this stage!” he laughs.

He’s been able to train consistently at the University of Edinburgh over the last six months but no amount of in-house races or time trials can replicate the feeling of the real thing. For a competitive animal and a man with experience of testing himself against the very best swimmers in the world, the absence of true competition has been one of the toughest elements of the last year.

“Absolutely,” states Quinn. “I love training and the buzz I get from that but there’s nothing like standing on the box thinking ‘right, let’s see where I am today.’ There’s nothing like challenging yourself against others and seeing what you’re capable of doing. It brings out the best in me, the butterflies.

“That is a big challenge and it’s definitely something I miss, but you just have to take it as it is and keep going. I know that when I do get on the blocks for an actual race, I’ll more than likely be trying to qualify for Tokyo. That’ll be enough excitement anyway.”

That qualification process for Tokyo is still a little hazy. The qualifying time remains unchanged but the boundaries imposed by Covid have forced the swimming authorities to be flexible. Swim Ireland recently announced a change to their criteria which will give athletes like Quinn who have yet to hit the required time three separate opportunities to qualify.

The first is at the Irish trials, fixed for April. The second is in May, at the European Championships in Budapest (although Swim Ireland are prioritising relay teams at that meet). The third and final chance will be in June, just a month before the Games, when swimmers will be able to nominate one meet at which they will have one last chance to go under the time.

Quinn still doesn’t know for certain that he’ll be able to travel to Dublin for the Irish trials in April, but assuming he can, that’s the one circled in red on his calendar.

“That’s still the aim. April is the first chance and that’s the one I’m aiming for. I just have my fingers crossed that I’ll be able to get there,” he said.

“The next chance would be in June, when I can nominate a meet. But to be honest I can’t even think that far ahead. Everything has sort of been planned for April.

“The way I’ve been looking at, as far as we know the Olympics are going ahead. Whether they actually do or not it is a different question. I’m not even going there though; if they get cancelled, they get cancelled. I have no control over that at all. 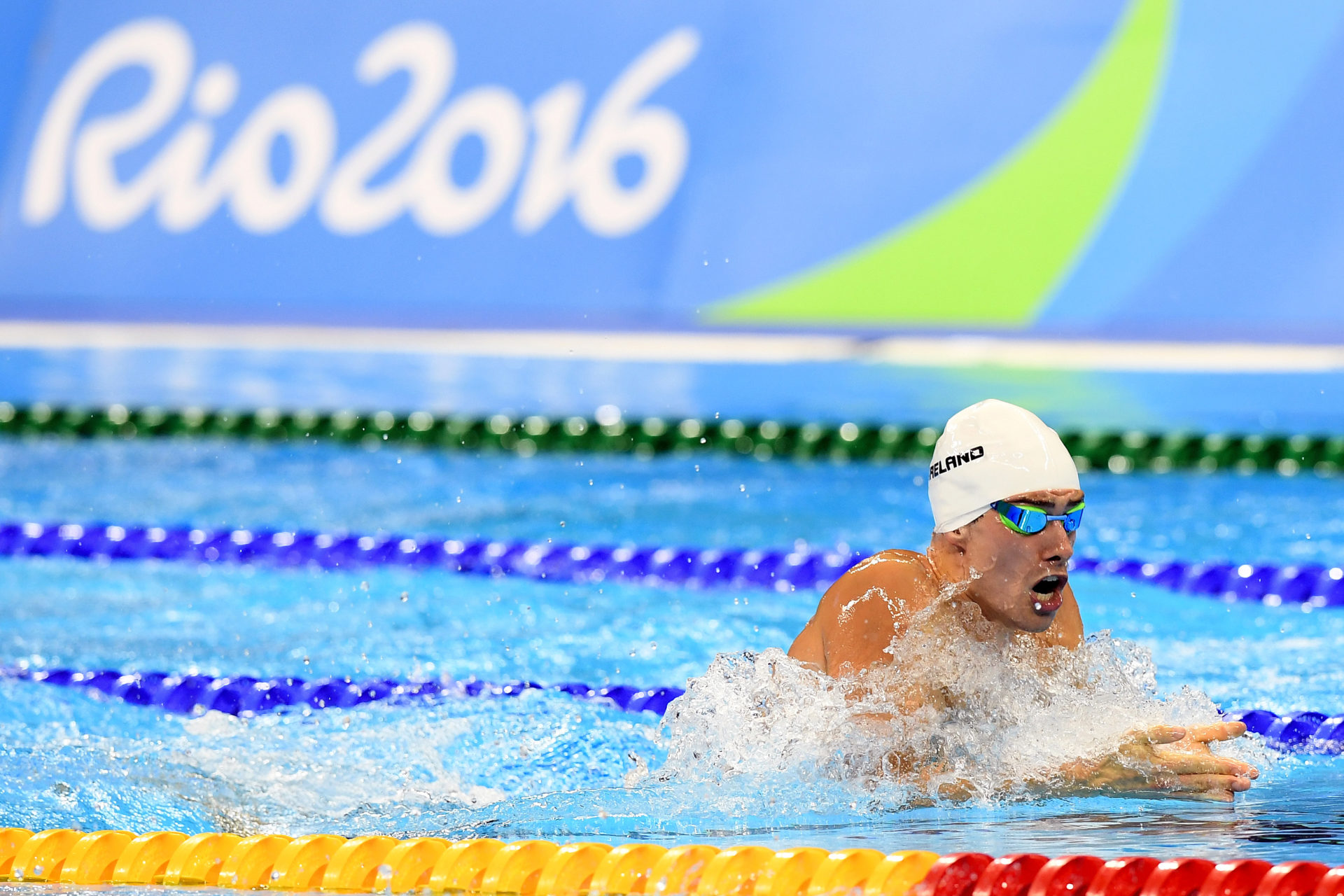 Quinn in action in the 200m breaststroke at the 2016 Olympics in Rio. Picture: INPHO/Andrea Staccioli

In Rio, Quinn competed in both the 200m and 100m breaststroke. Then, as now, the 200m was his main focus. He was unfortunate not to reach the semi-finals of the event after winning his heat but narrowly missing out on the necessary time, finishing 19th with 16 going into the semis. He will once again be prioritizing the 200m in his efforts to reach Tokyo, although if his form is good enough in the longer race, he should be in with a strong shout in the shorter one too.

“My best is 2.11, so I’m less than a second off making it. Which in swimming terms is relatively big but it’s also okay,” he offers.

“It’s disappointing because last year I felt I was in as good a shape as I had ever been and I never really got to see what that looked like in terms of a time. I felt as though I could have swam that time last year, whereas this year I’m still looking to improve on last year.

“But all the work that I did last year isn’t gone anywhere; I feel that if I perform as well as I’m able to perform I should be able to make it.”

He was given an unexpected boost last month when he was selected among the recipients of a new round of funding from the Olympic Federation of Ireland. €50,000 was made available to a group of athletes across various disciplines who, like Quinn, are chasing qualification for Tokyo but are not in receipt of Sport Ireland Podium funding. Quinn’s share of the pot isn’t massive money by any means but it will make a very significant impact on his attempts to get to the Olympics.

“It was a welcome surprise. I’ve not been funded for the last couple of years, so to get that funding boost makes a big difference,” he says.

“It makes life an awful lot easier. It means you can focus on getting the things you need to make sure you can perform. I have the basic equipment I need but it helps with the extras. It’s like ‘do I need a massage gun?’ If it’s something that’s going to be a help to me then yeah, now I can get it.

“Even the bigger things, being able to live well, able to eat better. Food and diet is so important, even more important as I’ve got older. It’s being able to look after yourself and not having to worry about how I’m going to be able to pay for this and that. It takes a lot of that weight away.

“It also helps when I go to competitions. Instead of flying at half 11 at night because it’s the cheapest flight, I can spend the extra money on a better flight because it means I’ll arrive better-rested and better-fuelled than if I had to go for the cheaper option. It allows all the extra bits to be a bit easier and means you’re not looking over your shoulder as much,” he continued.

Quinn will turn 28 in June, the month before the Games begin. In terms of Olympic swimmers, he’s already in his golden years. He won’t be making any grand declarations quite yet but he accepts that Tokyo, whether he manages to get there or not, will probably be the end of his competitive swimming career. It will be time, he says, “to move on to the next chapter.”

He has nearly finished his Masters in performance psychology. All that remains is one last assignment, which he aims to complete in the next few weeks before he concentrates fully on the water, and his thesis, which he is planning to complete post-Tokyo. He has been a student in Edinburgh for the last eight years (excluding a year he took out from his studies in 2019-20 in expectation of the Olympics) but is excited to take the next step into a career in performance psychology.

“There’s a chunk of it that’s based on sport, but I think the biggest thing that I’ve taken from it is that performance in any domain, whether it’s sport or business or whatever, how people achieve their peak, a lot of the same stuff goes into it,” he says.

“It’s been very helpful, I’ve taken some nuggets for my own preparation, things that I can do better. It’s about arriving on race day with the best possible mindset, because at this level, that’s really all that separates us. It’s how you arrive at training every day, how you go about everything to get the most out of yourself, to reduce that stress but also have the right amount of stress when you need it.”

Quinn has met with some personal tragedy in recent years; in 2018 his father John Quinn died tragically in a fall while hiking outside Strasbourg in Belgium, where he was working for the European Council. Nicholas stepped away from the sport for a time after John’s death but he resolved to come back for another tilt at the Olympics. That kind of fortitude and dedication to his sport has once again proved crucial over the last year.

“This time last year, there was no real scenario in my head where I was still swimming,” he states.

“I saw Tokyo as being the end for me last year, and when it was cancelled I went through a couple of months of getting to grips with whether this was something I wanted to do, to put my body through it again; mentally am I capable of putting myself in the place where I know I need to be?

“If I couldn’t get my head in the right place and be mentally in it, to the degree that I was last year, there was no point in doing it.

“But I have managed to do that.”