Four Mayo players to watch in 2021

We’re no closer to knowing for sure when exactly the 2021 inter-county season will begin, with schedulers in the GAA still operating at the mercy of Covid-19 restrictions. When on-field activities eventually do return, however, there are a number of Mayo footballers who will be worth keeping a very close eye on for a number of different reasons.

David Clarke’s retirement after nearly 20 years of senior inter-county football in January should theoretically leave Robbie Hennelly as Mayo’s natural number 1 goalkeeper. Having traded the starting job with Clarke through the entirety of his decade-long Mayo career to date, the Breaffy clubman will be hoping to use this campaign to establish himself as the undisputed first choice. 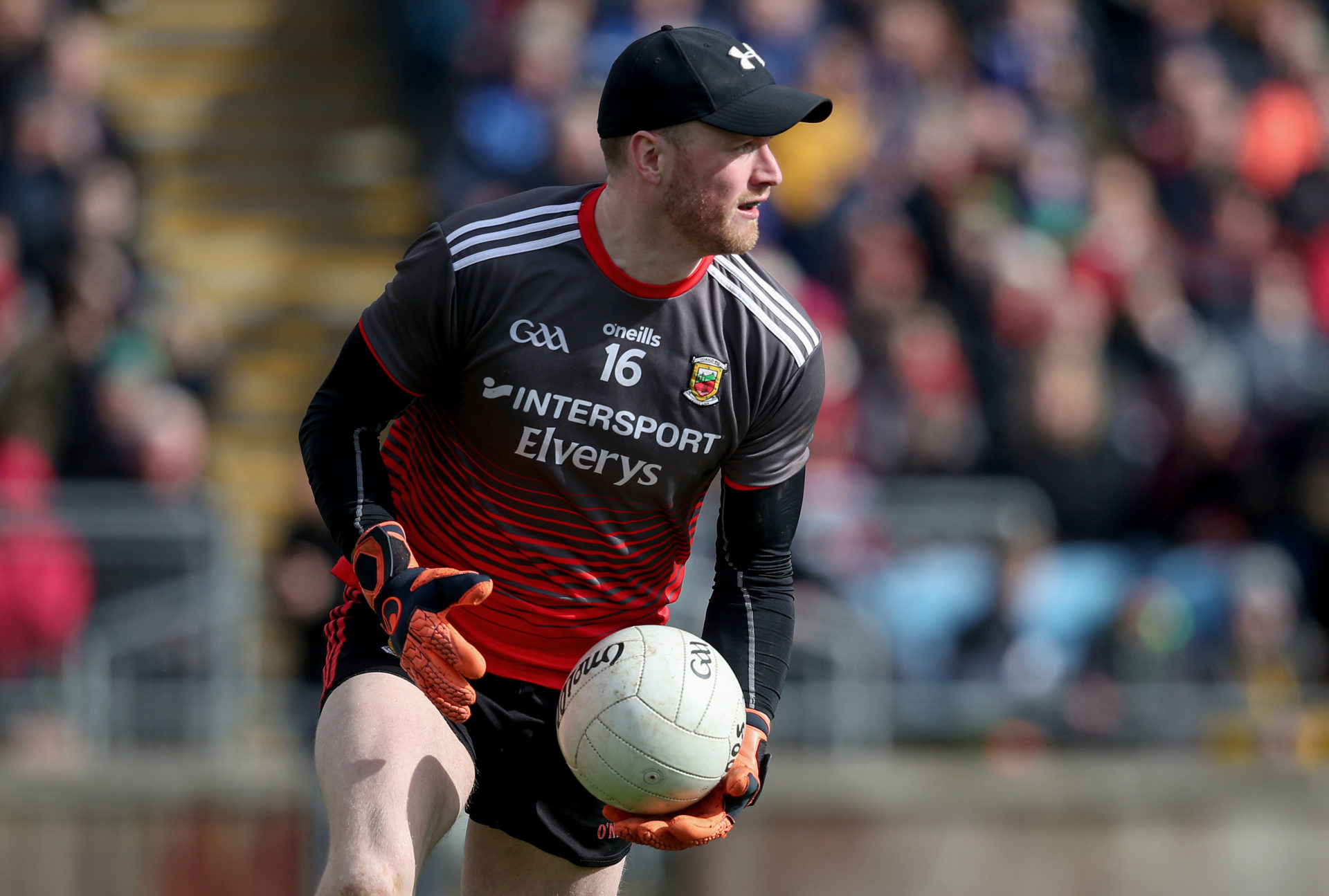 Robbie Hennelly will be hoping to establish himself as Mayo’s undisputed number 1 goalkeeper in 2021 following the retirement of his long-time rival David Clarke. Picture: INPHO/Bryan Keane

Hennelly didn’t feature in the 2020 championship as Clarke nailed down the goalkeeper’s spot and earned himself an All-Star nomination. Hennelly had actually started in three of Mayo’s five league games pre-lockdown and enjoyed a strong club championship as Breaffy advanced to the county final, but he was left looking on as Clarke started all seven of Mayo’s matches upon the inter-county resumption.

But the path is now clear for Hennelly, who turns 31 in March, to nail down the position. He is vastly experienced at this point in his career despite having shared duties with Clarke for so long and the common refrain over the last few years has been that Mayo had two keepers that would both be automatic starters for most other counties. Now is the time to back that up.

Hennelly will have to hold off Rory Byrne, the Mitchels clubman who was the third keeper on the Mayo panel last year, while there are a handful of younger stoppers who could also hope to stake their claims. Jamie McNicholas, for example, is a highly-regarded prospect coming out of the under-20s while Colm Reape’s performances for Knockmore in last year’s club championship had some clamouring for his elevation to the county panel.

Harrison must have been one of the unluckiest footballers in Mayo last year. Having started the first three games of the league pre-lockdown, the Aghamore clubman picked up a knock against Meath that caused him to miss the defeats to Monaghan and Kerry. After using the lockdown to get himself right, he sustained what looked like a fairly innocuous knee injury in the first half of the very first game played in Mayo after the lockdown, between Aghamore and Knockmore in the Michael Walsh league. 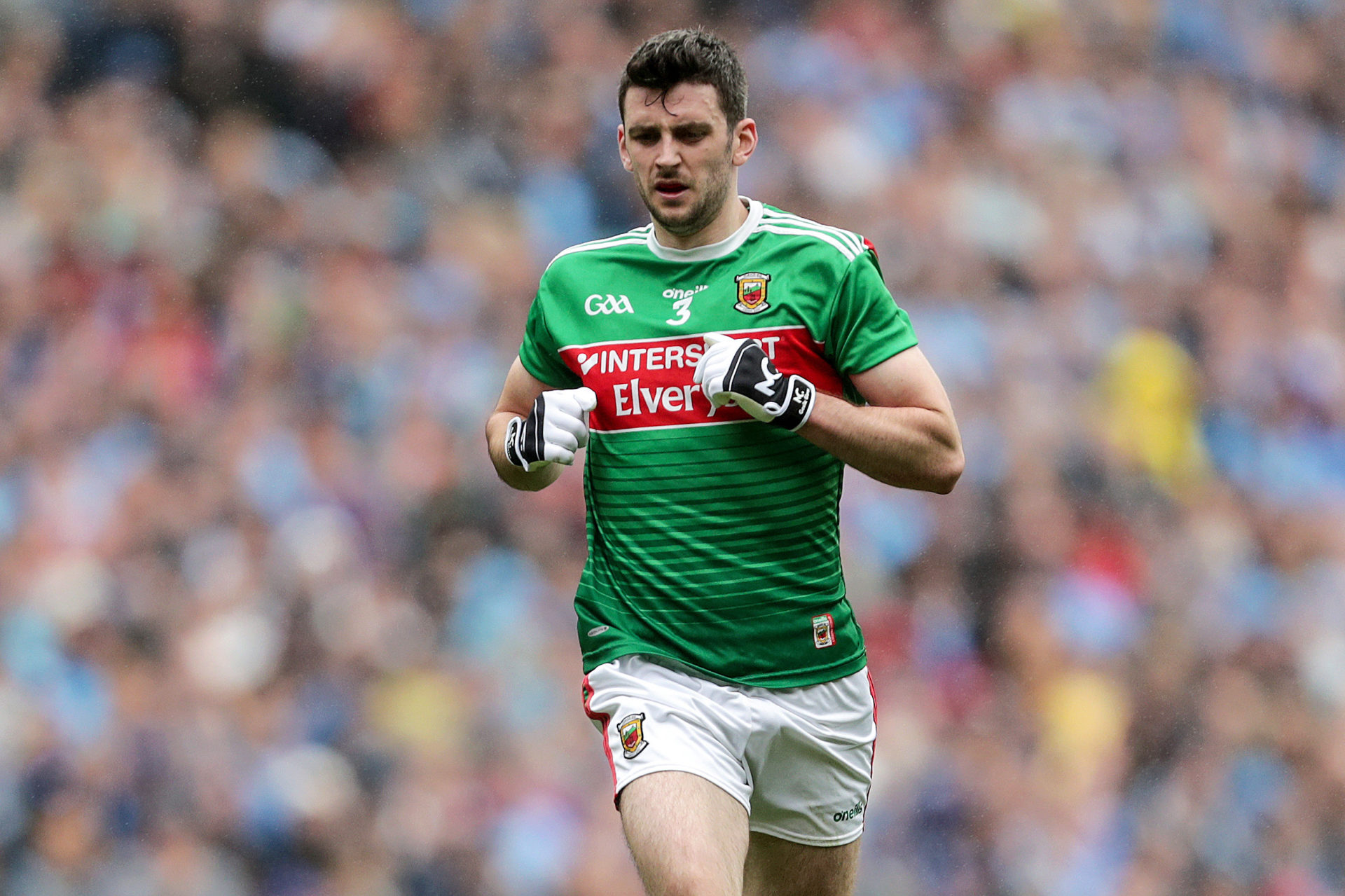 Brendan Harrison missed the entirety of Mayo’s 2020 championship campaign through injury and will be out to make up for lost time this year. Picture: INPHO/Laszlo Geczo

Unfortunately, the injury proved far more severe than was first thought and the 2016 All-Star defender would go on to miss the entirety of the club championship and all of Mayo’s run to the All-Ireland. He remained on the official panel but was still on crutches when he was pictured with his teammates at the end of the final defeat to Dublin in December.

Assuming that he will be back to fitness by the time the 2021 league begins, Harrison will be eager to make up for lost time. Chirs Barrett was reimagined as a full-back to great effect for Mayo last year, earning an All-Star nomination in what proved his last season before retirement, but Mayo are in need of long-term option at full-back and Harrison, despite making his name as a corner-back in 2016 and 2017, has the height and the defensive ability to fulfill the role.

Young players like David McBrien and Rory Brickenden will be busy putting forward their case, while James McCormack is another option also returning from injury, but Harrison will be out to re-establish himself this spring.

2020 was very much a case of the difficult second album for Fionn McDonagh, the young Westport clubman who made a huge impression in his first full senior season in 2019 but found himself sliding back in the pecking order last year. Having missed the pre-lockdown league, McDonagh started the league win over Galway in Tuam and came off the bench against Tyrone a week later, but didn’t make a starting team through the championship. His on-field involvement in Mayo’s run to the All-Ireland was limited to a very late run off the bench in the Connacht final against Galway. 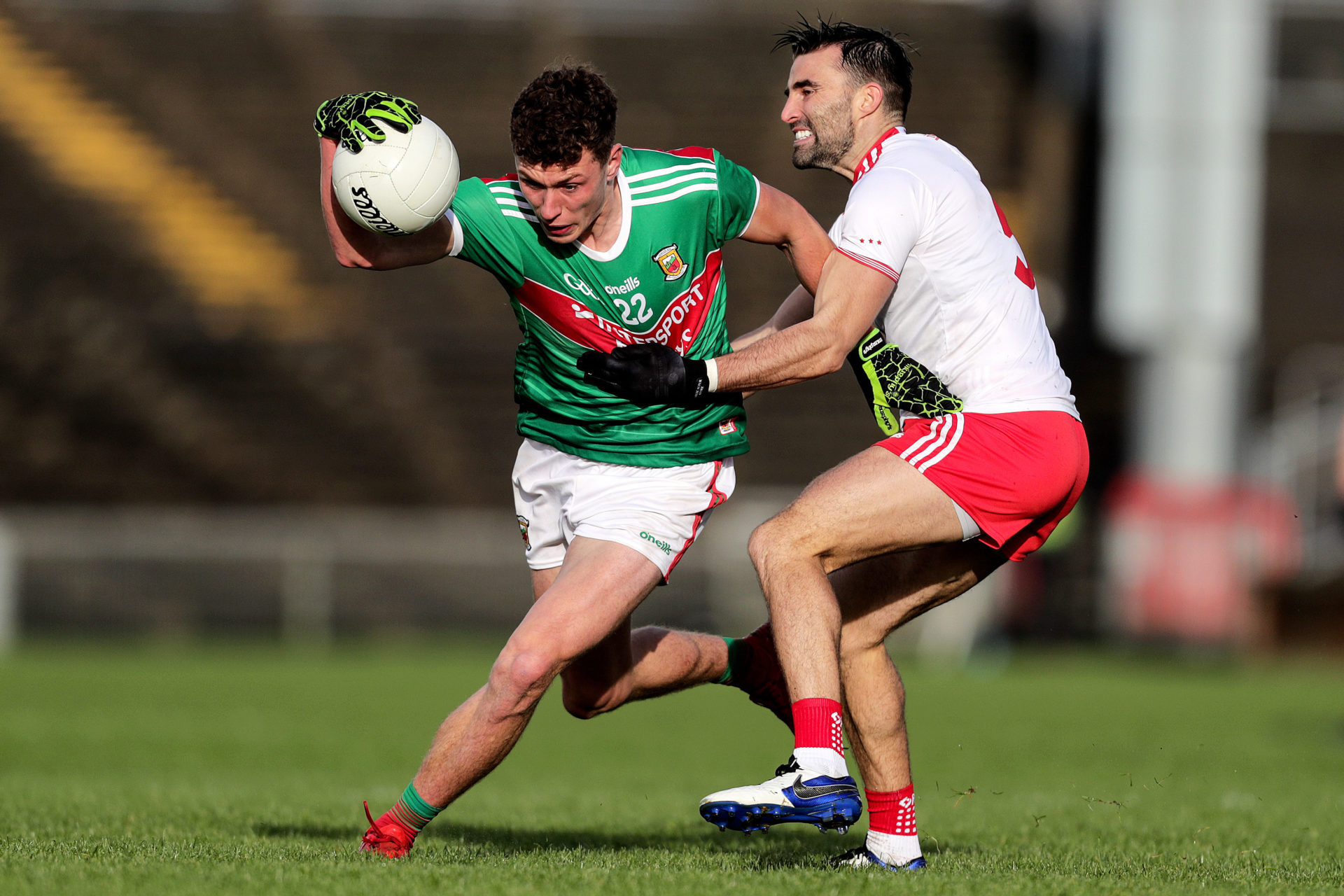 After a stellar debut season in 2019, Westport’s Fionn McDonagh found his playing time much harder to come by in 2020. Picture: INPHO/Laszlo Geczo

Maybe it was always going to be difficult to back up his stellar debut season, and some poorly-timed injuries didn’t help his cause, but McDonagh will be aiming to re-establish himself in the Mayo team this year. The attributes that marked him out early in his Mayo career, in those brilliant qualifier displays against Down and Armagh in 2019, haven’t gone away. He still has all the pace and the power, the same engine and the same eye for a score.

The emergence of Ryan O’Donoghue and his Westport clubmate Mark Moran last year has increased the degree of competition in Mayo’s half-forward line. Kevin McLoughlin remains as vital as ever and Jason Doherty is on the way back from injury, while Diarmuid O’Connor looks to have found his long-term home on the wing. McDonagh will have to battle hard to force his way back into contention but a player of his ability (who is still only turning 23 this year, let’s remember) should be relishing that challenge.

Bit of a caveat on this one – unlike some of the other names on this list, Colm Boyle has pretty much nothing left to prove heading into 2021. But that in itself could make it a fascinating year for the Davitts man.

Put frankly, plenty of us were waiting for Boyle to add his name to the list of Mayo retirees last month. After Vaughan, Barrett and Higgins – his comrades in the Mayo defence for a decade or more – all bowed out over the course of January it seemed almost inevitable that Boyle would follow suit.

He will turn 35 in July, after all, and it looked at the back end of last season as if the Mayo team was moving on without him; Boyle didn’t feature from the bench in the Connacht championship wins over Leitrim or Roscommon and was dropped from the match-day panel entirely from the Connacht final onwards. He hasn’t actually been seen in a Mayo jersey in over a year now, since he picked up an injury in the league loss to Dublin in early February 2020. 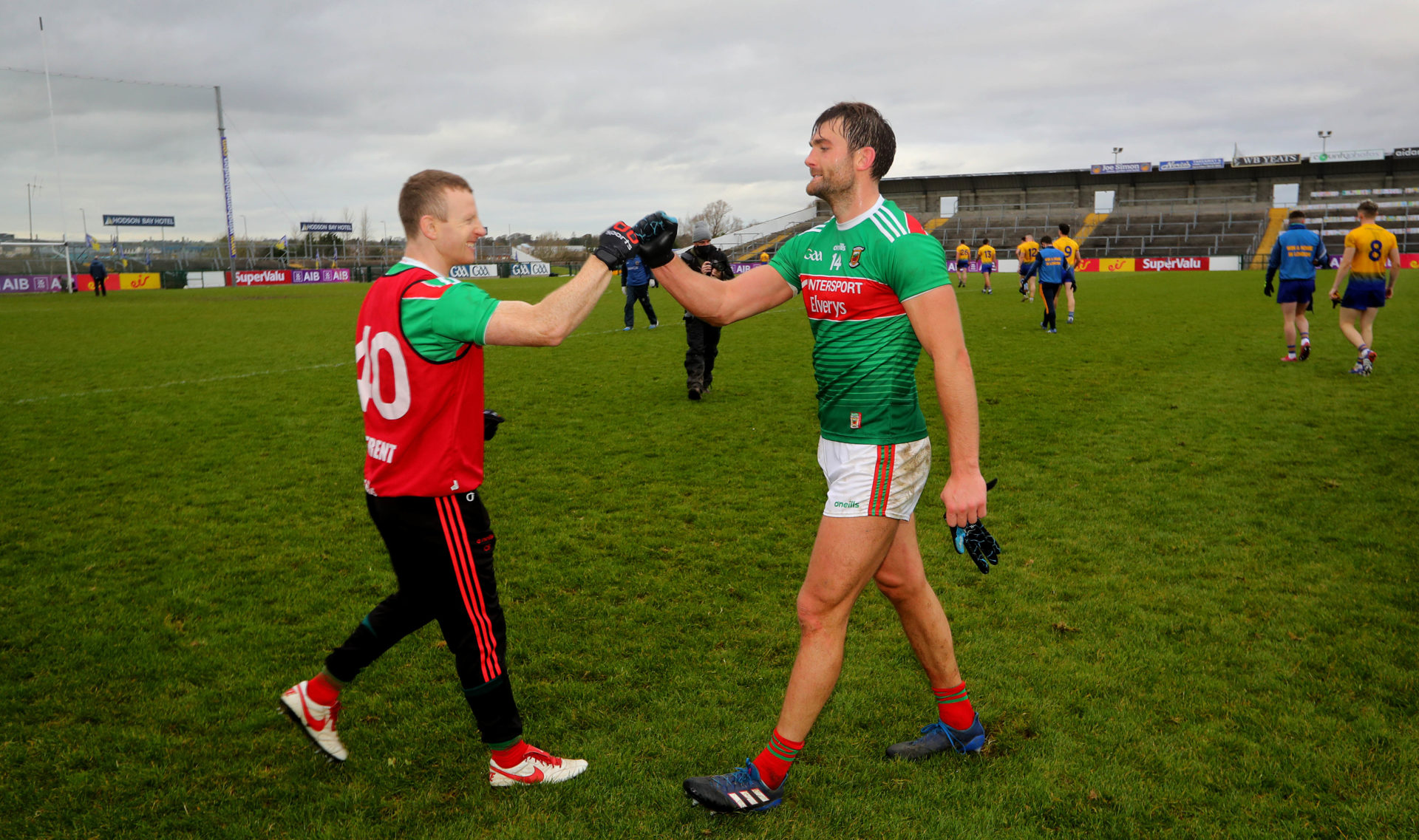 Colm Boyle with Aidan O’Shea after the 2020 Connacht SFC semi-final win over Roscommon. It would prove the last time Boyle made the match-day 26 last year. Picture: INPHO/Ryan Byrne

But he’s not coming back for the sake of it. Boyle could have signed out this winter and received all the plaudits and the outpourings of love that the other retirees got but has decided to recommit (according to his clubmate Michael Conroy, at least) and to endure all the pre-season hardship one more time.

Why? He clearly feels he has something left to offer. The suspicion is that he never quite got back to full fitness in the second half of 2020. He came back fast to help his club maintain their senior status in the championship (which they did) and it might have robbed him of the last few weeks he needed to get his knee all the way right to battle for Mayo contention later in the year.

He also clearly sees something in this emerging Mayo team that he wants to be a part of, for one more season at least. Whether the four-time All-Star has it in the legs to reclaim a starting place remains to be seen but given the mass exodus of seasoned players this off-season, just having a man of Boyle’s experience in the dressing-room is a benefit for Mayo.