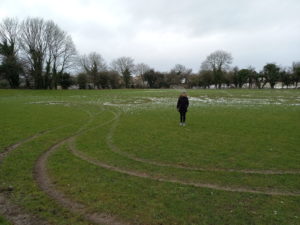 A primary school principal blocked three vehicles from leaving a football pitch and playground they had damaged until gardai arrived yesterday (Thursday) evening.

Dympna Culhane and her husband John were alerted by passers-by to lights at the rear of St Joseph’s National School in Ballinrobe between 7pm and 8pm. On arrival, they found three vehicles doing doughnuts around the playground and pitch areas at the rear of the school, which is located on Convent Rd in the town.

Dympna said the vehicles gained entry through a side gate and young men were standing in the playground and pitch areas taking videos on their phones of the two cars and a jeep which were completing the dangerous manoeuvres at high speed.

Her husband locked the entrance gate and Dympna contacted the gardai who arrived within ten minutes to question the young men.

The incidents were captured on the school’s CCTV system and show the cars and jeep on the grounds for up to an hour, circling around a young man who was holding a mobile phone before going into the pitch and digging up the green area. 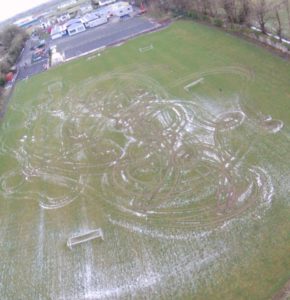 Dympha and vice-principal Ms Triona Canney said the incident has left them shocked, disappointed and saddened.

“The pitch was developed and opened in April 2018 and cost in the region of €80,000 to construct. Much of the funding was raised through community donations and fundraising. It serves the needs of 450 children who attend the school. Members of the GAA come up here to coach young students during school terms.”

They added that it was devastating that a group of young people would do such damage, especially when the community is already living through a difficult time as a result of Covid-19 restrictions.

“We are both working here for up to two decades and have never had so much as a window broken. It was soul-destroying to see this damage this morning in daylight. We have never seen the likes of it in the school before.”

Gardai are currently investigating the incident. 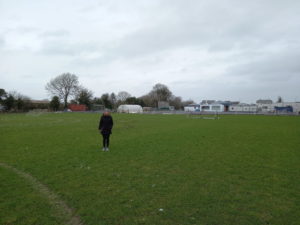