Anyone who has ever taken on the challenge of running a marathon will tell you it was one of the most physically and mentally demanding experiences of their life. So how must it feel to attempt to run the distance of nearly four marathons combined, back-to-back, over the span of just 24 hours?
That’s the challenge that Castlebar man Conor Gavin has set for himself. This August, the 23-year-old will take on the Connemara 100-mile, a race that sends its participants on a loop of West Galway that begins and ends in Clifden and takes in Letterfrack, Lettergesh, the Inagh Valley, Maam Cross, Leenane, Roundstone and Ballyconneely. Runners are given a 30-hour limit to complete the race but Gavin is aiming to cover the distance in the space of 24, while raising funds for three worthy charities: the Irish Cancer Society, Pieta House and Féileacáin (the National Stillbirth and Neonatal Association). 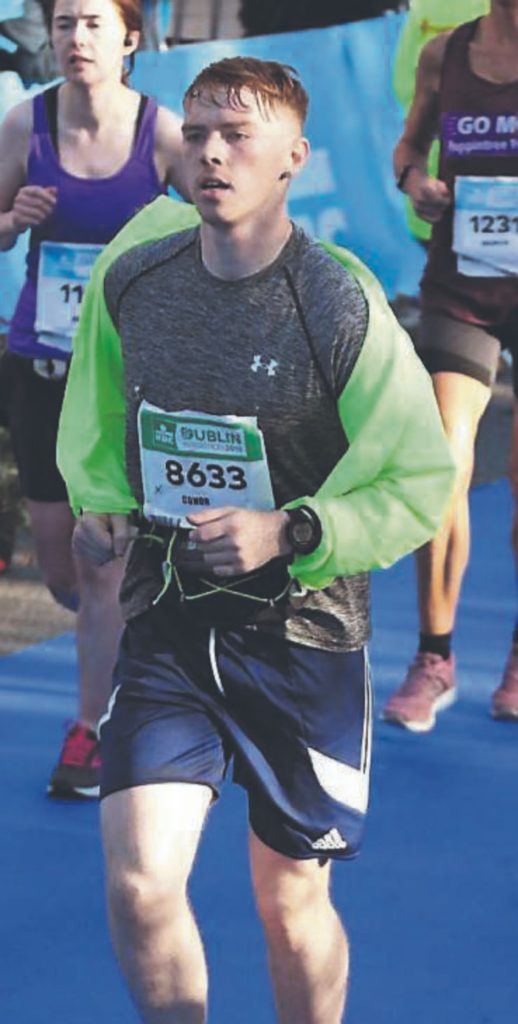 Castlebar native Conor Gavin finishing the Dublin Marathon in 2019. Gavin will take on the Connemara 100-mile race this August to raise money for charity.

It’s a daunting challenge, made even more so by the fact, as Gavin admitted this week, that road-running isn’t exactly his favourite pastime to begin with.
“I absolutely hate running!” he said with a laugh. “I know that’s mad to say, but I think it’s just the worst thing. I don’t mind the gym or lifting weights but even running a 5k has me thinking ‘oh God.’ But that’s why I’m taking this on, because I know how much I’ll hate it, and I know if I can get through it, I’ll get through anything.”
He’s far from a complete novice when it comes to distance running though, having completed the Dublin Marathon in 2018 and 2019. For Gavin, the buzz of running comes from embracing the pain and the struggle and ultimately overcoming it.
“I love the mental stress that comes with it. I love to push myself to see how far I can go. The next stage was the ultra-marathon so I said why not go all-out for six months, train like mad and try to do it. It’s mainly a mental thing. I just wanted to push myself while raising some money for charity at the same time.”
Conor, the son of Tommie and Celia Gavin from Castlebar, graduated from Sligo IT with a degree in business last autumn and is currently working in Elverys in Castlebar. He plans to spend the next six months in training to be ready for the race on August 14, when he will be aiming to complete the entire 100-mile run in one solid block, rather than by taking small breaks to sleep as some competitors opt to do. He also intends to rope in a couple of family members to serve as his road-crew, a mandatory element of a race that will run through the night.
Conor is planning to document his training journey across his social media to raise as much awareness and generate as many donations as possible. Each of his nominated charities does invaluable work in the community but Féileacáin, in particular, is a cause very close to his own heart.
“My parents, before they had me, they had twins who died just after they were born,” he explained. “My mum and dad got in contact with Feileacain in the last year or two and went to some of their events. I said I’d support them in some way.”
Conor is just embarking on what will be a long and arduous six-month training block. There’s nothing too fancy about the work ahead of him; it’s just a matter of getting out and pounding the roads to prepare his body for what will be an intensely grueling day in his life come August.
“It’s basically getting the miles into the legs. 50 or 60 miles is probably the most I’ll be doing on one session, and about 100 miles per week will be the max. I’ll keep going with home workouts as well, try to alternate between that and running because I don’t want to lose strength,” he said.
Conor’s journey can be followed on his social media platforms, where the link to his fundraising appeal can also be found.