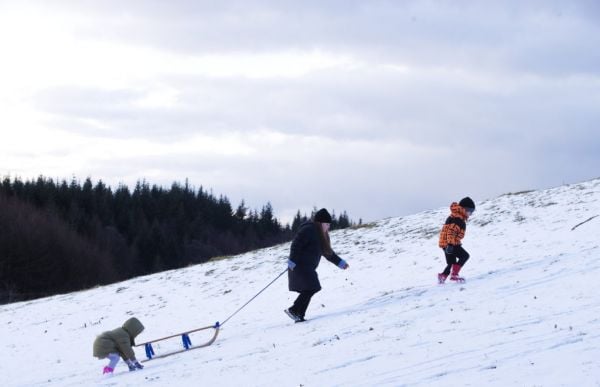 An updated weather alert for the whole of Connacht and a raft of other counties has taken effect since 5pm this evening and will run until 8am on Friday.

A 24-hour snow and ice warning came into effect at 8am on Thursday for the three provinces of Munster, Connacht and Leinster, accompanied by a yellow wind warning for the same areas.

Snow accumulations of up to five centimetres in some areas were forecast, as wintry showers pushed northeastwards over the island.

In its latest update on Thursday evening however, Met Éireann said outbreaks of rain, sleet and snow in the south and west will continue edging northeastwards this evening.

Some further snow accumulations will lead to hazardous conditions, mainly in parts of Connacht and south Leinster, while much of Ulster and north Leinster will stay dry.

Lowest temperatures will fluctuate between minus two and plus one degrees Celsius.

Met Éireann previously broke down its snowfall predictions for Thursday by time and location, illustrated with an animated graphic.

With significant snow not forecast to reach Dublin until later this evening, some decided to brave the icy Dublin waves.

The forecaster has issued fresh weather warnings for the coming days, including a status yellow snow and ice warning for Thursday night.

The alert for Connacht, Carlow, Kildare, Kilkenny, Laois, Longford, Wexford, Wicklow, Offaly, Westmeath, Clare and Tipperary took effect at 5pm on Thursday and will run until 8am on Friday.

“A slow-moving band of sleet and snow will continue to give some further snow accumulations overnight,” the forecaster said.

It added that “strong to gale force” winds mixed with rain, sleet and snow will lead to poor visibility and hazardous conditions, with a status yellow wind warning for Munster, Connacht and Leinster also running until 8am on Friday.

There will be some lingering wintry falls early on Friday morning, with outbreaks of rain across southern counties persisting through much of the day.

It will be dry elsewhere during the day, but Friday night will be wet and windy as rain extends countrywide, falling as sleet or snow in Connacht, Ulster and parts of north and east Leinster.

Saturday will continue the same, with further falls of sleet and snow affecting Connacht, Ulster and parts of north and east Leinster at first, before transitioning to rain later.

Met Éireann has issued a status yellow snow and ice warning, with up to five centimetres of snow forecast to fall over Connacht, Leinster, Cavan, Monaghan and Donegal between 2am and midday on Saturday.

Cork, Kerry and Waterford will also be subject to a status yellow rainfall warning from the early hours of Saturday to midday, with between 30 and 40 millimetres bringing a risk of river and coastal flooding.