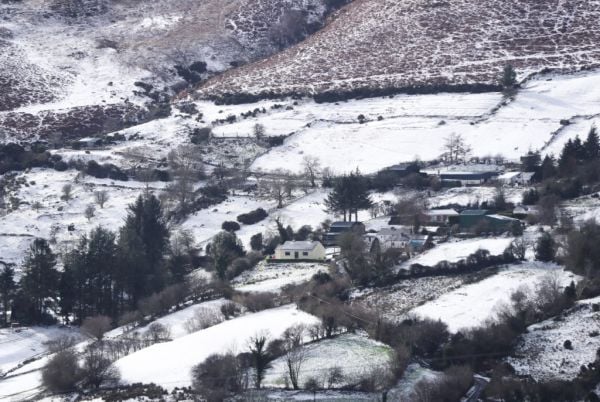 Met Éireann has released detailed snowfall predictions as up to five centimetres is set to fall across Ireland tomorrow.

The forecaster has broken down its weather forecast by time and location, as a band of rain, sleet and snow will gradually push northeast across Munster, Connacht and Leinster on Thursday.

An animated graphic from the forecaster reveals the way in which wintry showers are set to move across the island.

The image covers the period from midnight tonight to Friday afternoon, with white and green colours indicating snowfall while blue, yellow and wine indicate rain.

Will it snow where you are tomorrow?
If so, what time and how much? ☃️
The animation below runs from midnight tonight to Fri afternoon.
Blue/yellow/wine colours = rain
White/green = snow
The heaviest snow will be over high ground in Munster & south Leinster.#sneachta pic.twitter.com/FQHKApPcW9

While most of the island will experience some snow showers on Thursday, the heaviest snow is set to fall over high ground in Munster and south Leinster.

A mix of rain and sleet will arrive first in Cork at around 7am, while snow will have made its way to Galway by 11am.

As the weather front makes its way across Ireland, it will reach the east coast by evening to blanket Dublin in “light” snowfall by 9pm.

Belfast will stay mostly dry, as the snow will not reach the northeast.

Tomorrow a band of rain, sleet and snow will gradually push northeast across Munster, Connacht & Leinster with 5cm of snow in some areas ❄️⚠️ Weather warnings issued – https://t.co/el5R3hq1vK

The latest view from space shows tomorrow’s rain & snow to the west of Ireland 🛰️📷👇🏽 pic.twitter.com/knQoqk7vVk

Thursday will be will “bitterly cold” across the country, with wind chill due to strong and gusty southeasterly winds.

Met Éireann has issued several weather warnings for the coming days, with a status yellow snow and ice warning for Dublin, Louth, Meath, Cavan and Monaghan in place from 4pm to 8pm on Wednesday.

Scattered hail or snow showers will continue for a time this evening in those locations, with some accumulations in places and with icy stretches developing on untreated surfaces.

On Thursday, a status yellow snow and ice warning for the three provinces of Munster, Connacht and Leinster will come into force at 8am, lasting for a 24-hour period.

All current warnings can be viewed here, warnings are displayed for each day. Click on the relevant tab for today, tomorrow and Friday’s warnings. ⚠️https://t.co/Xg3aMJlyuShttps://t.co/l8JdKfwZt9https://t.co/njxY3RB9TQ pic.twitter.com/0Fw5IW2nRh

In the warning, the forecaster said: “A band of sleet and snow spreading northeastwards during Thursday giving snow accumulations of up to 5cm in some areas (higher over the mountains), but transitioning to rain in the west and south on Thursday night.”

The forecaster has also issued a concurrent status yellow wind warning for the same locations, saying that strong to gale force winds mixed with rain, sleet and snow will lead to poor visibility and hazardous conditions.