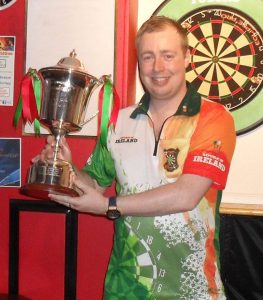 A Mayo darts player is aiming to hit a bullseye on his quest to join the professional ranks of the sport. Martin Heneghan, of Roundfort, will travel to the UK this Wednesday to compete in the Professional Darts Corporation’s (PDC) Q School in an attempt to win a coveted tour card.

The tour card will allow Martin to compete on the PDC circuit alongside household names like Michael van Gerwen, Dave Chisnall and Gerwyn Price.

However, there are a total of 173 players competing for a tour card. Martin’s colleagues in the South Mayo Darts League wished him the very best of luck on their Facebook page.

“Martin is arguably playing the darts of his life at the moment and is confident of a good showing amongst the 173 players in his field. Best of luck Martin!”

The final four players from each of the six days of darts will proceed to the final stage of qualification next week whilst the remaining players will hope to build up enough ranking points to make it to the final qualifiers.

All live scores from every game can be viewed on www.dartconnect.com and updates on Martin’s progress will be shared on the South Mayo Darts League Facebook page.