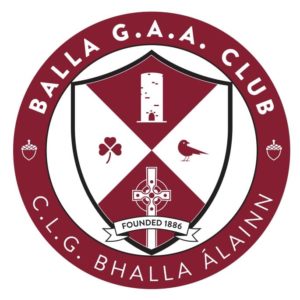 Balla GAA Club have unveiled their new club crest. The design encompasses the catchment areas of the club: Balla, Belcarra and Manulla.

The crest has been designed by Nathan Somers, a former Balla player, at We Make Visual, and comes after a number of weeks of careful planning and research.

The theme of the new crest promotes inclusion and a new era for Balla, promoting the three areas – Balla, Belcarra and Manulla – equally in the design elements.

Retained from the previous design are the Round Tower and the PW Nally monument which represent Balla, while adding in a three-leaf shamrock that represents Manulla; a raven which represents Belcarra; surrounded by acorns on either side to include the Dawn Oak woodlands that encompass Nally Park.

Speaking about the new crest, club chairman Gerry O’Neill said: “We are delighted to announce our evolved version of our club crest which we feel is coming at a time when our club is expanding at a fast pace.

“After our recent county intermediate final victory, one of our former players, Nathan Somers from Station Road, got in contact and offered the services of his company, We Make Visual, to collaborate with the club in designing this new crest.

“This new design keeps the design elements of our old crest, however, promotes a more inclusive club by including symbols which represent Belcarra and Manulla.”

“We want to thank Nathan and We Make Visual for their generosity and professionalism and we hope this new crest brings many more years of success to our club.”