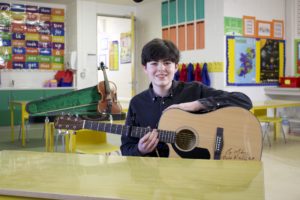 A young Ballina musician, who was one of the biggest hits during last year’s Late Late Toy Show, will be back on screen again as a special guest tomorrow morning on a RTÉ show.

Mikey Maloney got the surprise of his life last year when he was joined on the stage of the annual Toy Show by Dermot Kennedy and even more so when the chart-topping singer joined in on Mikey’s rendition of Kennedy’s hit Giants.

This Wednesday morning on Home School Hub, Mikey will join the Hub to talk about his love of music and will be playing one of his new original songs.

Home School Hub is on every weekday from 10am on RTÉ 2.

Re-watch the magic moment the young Ballina singer was joined on stage by Dermot Kennedy at the Late Late Toy Show below.