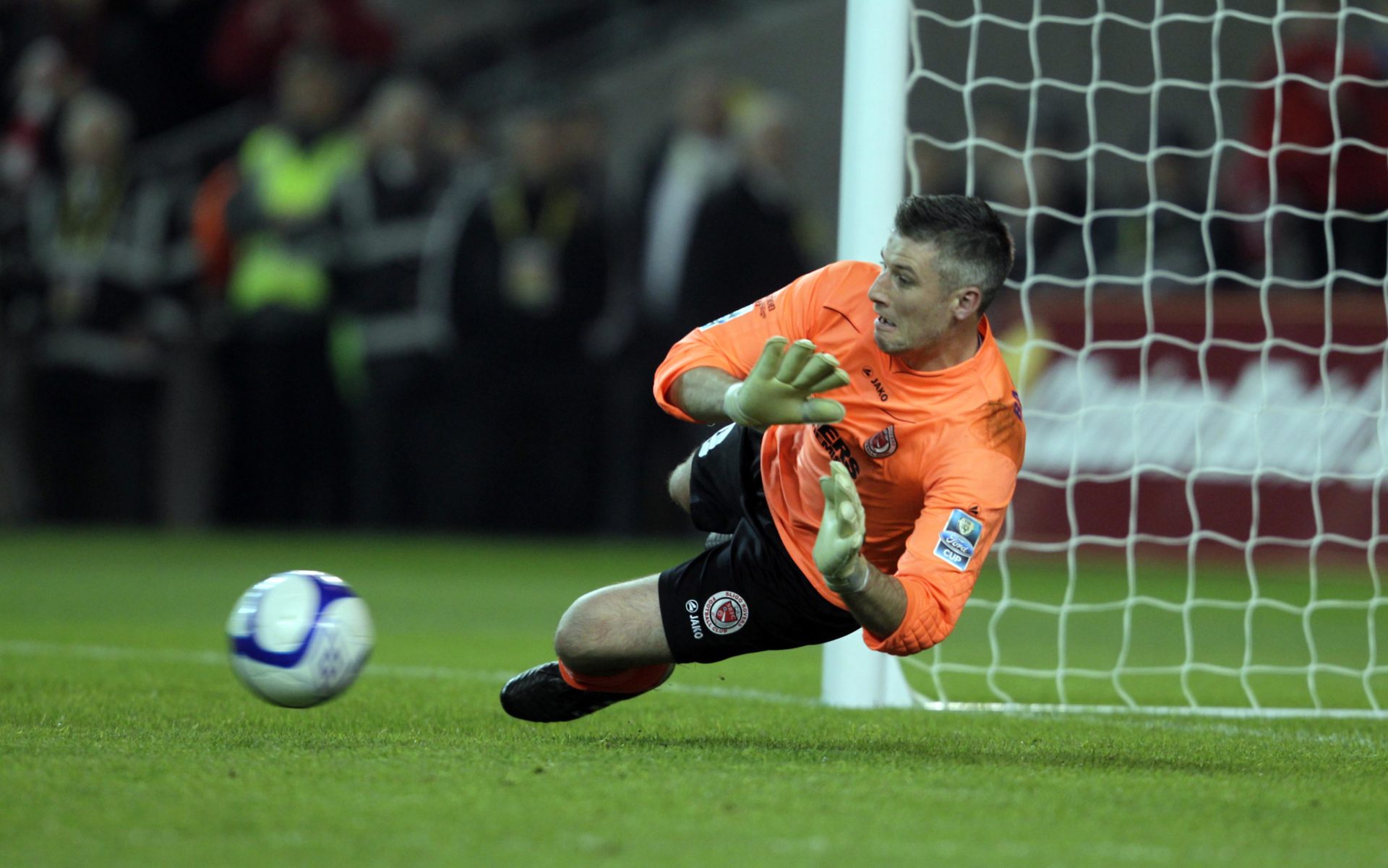 Ciaran Kelly saves his first penalty in the FAI Cup final shootout between Sligo Rovers and Shelbourne in the Aviva Stadium in 2011. Picture: INPHO/Donall Farmer

Just over a decade has passed since Sligo Rovers won the first of three FAI Cups in the space of four seasons with a penalty-shootout win over Shamrock Rovers at the Aviva Stadium in November 2010. Having lost the previous year’s final to Sporting Fingal, the Bit o’Red would go on to retain their title the following season with another win on penalties over Shelbourne before capping the most successful period in the club’s modern history by claiming the cup for the third time in four years with victory over Drogheda in 2013.

At the heart of Rovers’ back-to-back cup wins in 2010 and 2011 was a Mayo man, Roundfort native Ciaran Kelly, who performed heroics in the 2010 final by saving all four of Shamrock Rovers’ spot-kicks. He repeated the trick in the following year’s final, coming off the bench in extra-time specifically to face the Shelbourne penalties and saving two of the three attempts as Rovers won 4-1.

Kelly, now aged 40, is currently living with his family in Qatar. Kelly is the First Team Coach and Academy Director at Lusail FC, the club based in the rapidly-growing city in which the final of next year’s 2022 World Cup will be played.

Lusail recently won the Qatari third division and are now operating in the second division, with ambitions of becoming a fully-professional outfit and climbing into the top tier in the coming seasons.

The Covid-enforced shutdown has given Kelly time to reflect on his storied career and, in particular, the ten-year anniversaries of his penalty heroics for Sligo Rovers in those cup finals of a decade ago.

“That is one of the crazy things about this pandemic, in that it has given me the time to sit down and reflect on the past,” said Kelly.

“At the time you are always in the moment but during the lockdown there was a lot of nostalgia on social media and Sligo Rovers were uploading old games onto YouTube which has brought so many memories floating back. For example I had never heard the Ocean FM commentary from the 2010 final. When I’m doing the weekly shop I like to listen to a podcast so I started listening and was becoming emotional and had to turn it off. They were unbelievable memories of a special moment with great team mates, club mates and family and friends.

“Back then I was very much in the moment but now I can take the time to look back. There have been Zoom reunions with the lads and we have reminisced and I am lucky that can remember those times with good people. I hope the day isn’t too far away when we can all meet and sit down together and have a meal and share stories of our time in that dressing room.”

Kelly’s heroics in the 2010 final were recently voted one of the greatest sporting moments in the history of the Aviva Stadium by listeners of the Newstalk’s Off the Ball show but for the man himself, the 2011 final was more enjoyable.

“They were fantastic times that I will always treasure and cherish and I think players should respect those moments more when they happen. Good times like those don’t come around too often. The 2011 one is a special final for me as I felt more in control. In 2009 in the run-up to the final against Sporting Fingal I couldn’t control my emotions and then in 2010 I wasn’t as much in control of them but I enjoyed it more.

“In 2011 then I felt I was in full control of my emotions. I remember with about ten minutes to go in normal time the lads on the bench were saying ‘we’re not going to be making a third change, they’re going to hold that for you.’ Then on the stroke of full-time Gerry Carr said to me get ready and then Cookie walked past and said head-on and I knew what he meant.

“I stayed inside in the warm-up area in the Aviva and banged a ball against a wall. I would come up the tunnel to check that there was no change in the score. I always remember Tony O’Donoghue saying to me that I looked like a boxer getting ready to enter the ring for a fight, such was my focus.

“I didn’t want to be running up and down on the sideline out of professional respect for the other keeper and also I wanted to feel the atmosphere in the stadium. I remember what it was like when I came on and the lads told me after that it was a huge lift for them and then some of the Shels lads said they were saying crap to themselves because they remembered the year before!

“I have to say that even now I am fuming that they scored the first penalty and that I didn’t save it as I wanted perfection. I knew where their kicks were going, I remember when Collie James stepped up for his kick and I pointed to the top corner because that is where he had put it in 2009. Was it mind games – 100%!”

To this day Kelly retains special memories of his time with Sligo Rovers and continues to keep tabs on their progress. In a way he is trying to replicate what he experienced in the Showgrounds with Lusail.

“I think it’s fantastic that the tradition is still there of so many lads from Mayo playing with the club. I think that it is due to the youth development in Mayo and the opportunities for players to progress their careers. 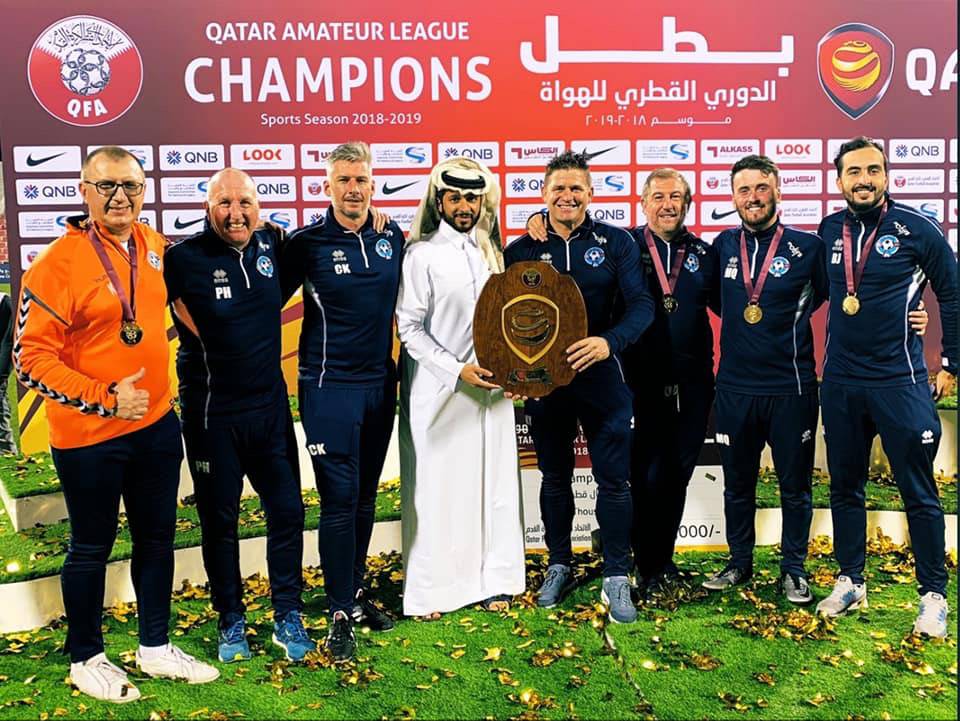 Ciaran Kelly, third from left, celebrating with fellow staff of Pearl FC following their league title win in 2019. Kelly is First Team Coach and Academy Director at the club, which has since been rebranded as Lusail FC.

“The lads did so well last season and showed that you should never underestimate a group of Sligo Rovers players or management. They had been written off by everyone and marked for relegation pre-Covid and then they got stuck in and proved everyone wrong and are now back in Europe for the first time since 2014, which was the end of such a high-profile period of sustained success for the club.

“The people behind the scenes have worked tirelessly to get the club back to this position. I hope by the time it comes around that crowds will be allowed back to games as these are always special moments for fans. Liam, John and Brian deserve huge credit for what they have done. The general manager Colin Feehily as well is up there, as no matter what challenge is thrown at him he finds a way to get it done.”

Kelly left Rovers in 2013 but the bonds and friendships he formed in his time at the club remain as strong as ever.

“I have seen in the last ten months, and I think this is one of the biggest credits to Sligo Rovers, that the bond still remains between former players and managers. Sligo stays with you. I have never been in a community like Sligo. It’s not a football club – it’s a community.

“It is a community that lives for the weekend and the players and the staff that play for the club, they have to give hope to the people, give them something to look forward to. It’s important for the younger generation and for the older adults as well. The biggest compliment I can pay the club is highlighting the hard-working volunteers that are involved and the management committee that works so hard, these men and women willingly give up their spare time and dedicate their lives to the club.

“That’s what makes Sligo as a whole much better to this day. I have tried to take that DNA from my time with Sligo to the other clubs that I have worked with. It’s a difficult challenge but is something that I always try to replicate as Sligo Rovers are a club like no other.”