Up to 200 babies of Mayo mothers died in Tuam Home

After the story of the Tuam mother and baby home broke, Majella Loftus spent an afternoon with historian Catherine Corless. Here she documented the story of the home and the babies who died within its walls. 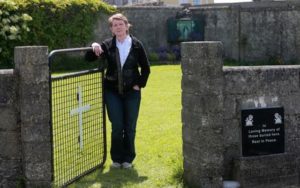 Up to 200 babies who died in the Bon Secours Mother and Baby Home in Tuam are documented as being born to mothers from Mayo.
Catherine Corless, a local historian in Tuam revealed in 2014 that 796 children, mostly infants, died in the home during its operation between 1925 and 1961.

The home was a maternity home for unmarried mothers and their children from Galway and Mayo. It was run by the Bon Secours Sisters, a Catholic religious order in conjunction with Galway County Council. Unwed pregnant women were sent there to give birth. Some of the poorer women were afterwards forced to work without pay, in reimbursement for some of the services rendered. They were separated from their children, who remained separately in the Home, raised by nuns, until they could be adopted or fostered.
In an interview with the Western People, Catherine produced a list of the 796 babies who are documented as having died in the Mother and Baby Home obtained from the register of Births, Deaths and Marriages in Galway County Council. The document, seen by the Western People has the names, addresses, dates of death and ages of each baby who died of various illnesses such as tuberculosis, convulsions, measles, whooping cough, influenza, bronchitis and meningitis.
In total, there are 196 babies on the document listed as being born to Mayo mothers. Of the 796 children, a total of 59 have no address listed. Each area of Mayo is represented as having had a mother who spent time in the Tuam home. The most number of mothers came from Castlebar and Ballina at 25 each.
A total of 21 mothers came from Westport while nine came from Ballinrobe and Newport, eight from Belmullet and seven from Kiltimagh and Ballyhaunis. Women from Carracastle, Ballycroy, Killala, Bofeenaun, Ballycastle, Doocastle, Crossmolina, Bonniconlon, Lahardane and Geesala in North Mayo are said to have spent time in the home while babies born to mothers from Charlestown, Aughamore, Knock, Swinford, Bohola and Kilkelly also died in the home. Louisburgh, Achill, Glenisland, Islandeady and Inishturk in West Mayo were also named as some of the addresses of mothers while Hollymount, Ballindine, Kilmaine, Tourmakeady, Balla, Claremorris, Partry, Carnacon, The Neale, Cross and Mayo Abbey each had mothers whose baby died in the home. The Mayo babies died from the ages of 23 hours to four and a half years.
It is believed there are hundreds of other mothers from Mayo who spent time in the home and whose babies were later fostered or adopted. Catherine explained that the system was babies born to Mayo mothers were fostered, where possible, back to Mayo.
Of the babies who died, Catherine did extensive research on nearby cemeteries and found no names that match up with the list of children’s deaths.  In 1925, it was decided by Galway County Council to bring the Bon Secours Sisters from Glenamaddy to Tuam, because they were a nursing organisation, to run the home.

Catherine’s work began in 2012 when she wrote an essay called “The Home” in the annual Journal of the Old Tuam Society. Little did she realise what she would uncover, but since then her work has seen her help many survivors of the home to reconnect with their families. Of the “Home” children she said: “I went to school with the ‘Home Babies’ for two years because the school closed in 1961. A strong memory was of them being treated differently, they were kept apart from us which made them different, especially to a child because everyone is the same to a child. They weren’t allowed to mix with us at all. They came to school later and left earlier. Even at that age, them poor things knew they were different, that they weren’t normal people, that’s the message made clear to them.” 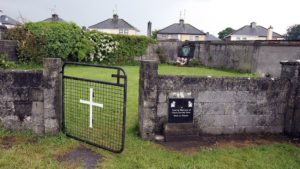 She found the grotto at the housing estate which now stands on the site of the Home and its seven acres which is in memory of the young babies who are believed to be buried there. Plans drawn up for the estate in the early 1970’s indicate the County Council knew there was a ‘burial ground’ on the site and accommodation was made for this, despite the council telling Catherine they never knew anything about it.
Of the system in place at the time of the Home, Catherine said: “The Bon Secours sisters were paid by the State per head for each mother and child from Galway and Mayo. The Council provided capitation grants for roofing and maintenance. They had this group of women to do the work. When the mother went into the home, she had to stay there for a year to look after the child and to pay her
expenses for her confinement for having the baby unless her family could pay £100 fee, which didn’t happen normally in the 1940’s. They had a huge employment force to do the work in the home with the result that nobody else was employed from outside the home. Very few people got inside the eight-foot-high walls on the seven acres. The nuns had complete power and control.”
She continued: “The children went to school in the Mercy and Presentation schools for two years before they were fostered out. The system was that if the mother came from Mayo, the child was fostered out to Mayo mainly. It catered for all of Mayo and Galway with a huge number coming and going. At any one time, there were on average 50 to 80 mothers and 100 to 200 children. Some were adopted and others died. Advertisements appeared in the local papers for foster parents. The only credibility a couple needed was a letter from the Parish Priest. The family home wasn’t vetoed. They went in, the children were brought into a room, the parents saw a child they liked and chose a child. The idea in a lot of cases was the families were as hard and as bad, as unloving and uncaring as the home system. Many were brought out to do farming or to help out. One man remembered being fostered because the parents wanted their children to have an education. This lad was fostered to do the hard work. They got meagre feeding, were not dressed well and worked desperately hard. Most haven’t forgotten that. The parents got a weekly grant and a yearly clothing allowance but the children never saw it. They never had a chance and had no one and drugged along. Once the child turned 16, most were kicked out of the house because the parents didn’t get paid anymore. Most went to England. There are some who fared out well and whose families looked after them. The majority fared badly in a system which was accepted by everyone and taken advantage of by most.” 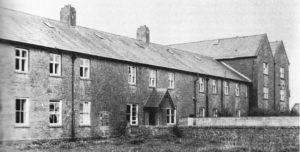 Initially, Catherine and Teresa Kelly, a resident of the Tuam estate, set up a committee with the aim of building a bronze plaque with the names of each child who died in the home and to date they have raised thousands of euros. However, since the setting up of the inquiry, led by Judge Yvonne Murphy, who has visited the Tuam site, this has been put on hold. “My aim is to promote the story and keep it out there for the sake of these people, the survivors, who came to me. The injustice was unbelievable and I couldn’t sit back and do nothing. All I have ever done is presented facts as I found them.”
Catherine’s greatest hope now is that the remains of the young children will be exhumed and a proper burial site be set up. “They have to be taken out of there and put somewhere else.”
The story took on a life of its own last year and was reported worldwide. Catherine describes herself: “I am more of an introverted person, I don’t socialise or mix that much but all of a sudden there were people coming from everywhere to hear and tell the story. I was so delighted that the story was finally out there that I met everyone.” However, having met Catherine and heard her story, she is more certainly a kind-hearted, modest and loving person who saw an injustice and has made it her life’s work to help any survivor of the Tuam home who has come to her. “Many survivors are only coming forward with the support of their families because of the stigma attached to the babies who grew up in the home.”