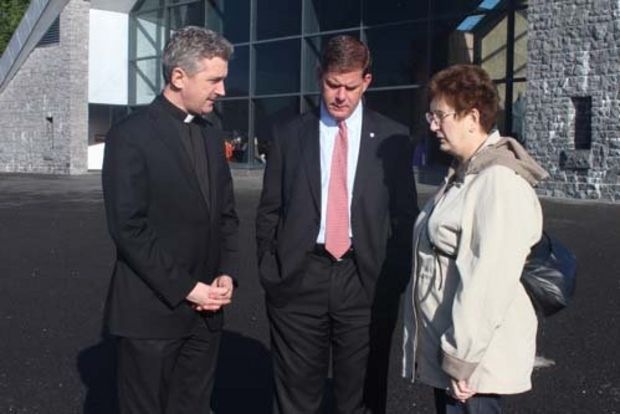 Marty Walsh with Fr Richard Gibbons at Knock Shrine in 2014.

The Boston Mayor who has been nominated as the next US Secretary of Labour has close ties with Knock Shrine, writes Marian Duggan.
Marty Walsh, whose parents both hail from Connemara, battled cancer as a child and credited a visit to the Marian Shrine for a large part of his recovery and his faith.
In 2014 he visited the shrine with family members and was due to return in 2016 with a Boston pilgrimage which flew into Ireland West Airport. He was unable to make the trip but was “very helpful in the background”, explained Knock’s parish priest Fr Richard Gibbons.
“He is very personable and nice and I have no doubt he will be paying us a visit shortly,” Fr Gibbons said.
Nominating Mr Walsh, a gaeilgeoir who has served as Mayor of Boston since 2014, US president-elect Joe Biden describe3d him as “tough as nails”.
” Diagnosed with cancer at age seven, beat it at 11.” “He always puts working people safe. Fighting for $15 minimum wage, paid family leave, providing frontline workers with emergency childcare and equipment they need.
“Marty understands like I do that the middle class built this country, and unions built the middle class.”
“He knows worker power means not just protecting the right to unionise but encouraging unionisation”.
Referencing his Mayo ancestry the president-elect also mentioned Mr Walsh’s heritage, while making sure to get in a joke: “[He’s] the son of Irish immigrants – the only downside is they aren’t from Mayo, they’re from Galway.”