Belmullet and Erris have been left ‘bereft’ by the loss of Bernie McAndrew.

Her funeral mass took place at the Church of the Sacred Heart in Belmullet today. Bernie’s sudden and unexpected loss on Sunday stunned and saddened the community in Belmullet and her native Geesala.

Her devastated husband Ian was unable to attend her funeral due to illness but his moving words will have touched the many that watched the mass online today.

The couple who were ‘madly in love’ had been married for 32 years. Ian’s poignant eulogy was read out on his behalf. “Bernie was beautiful both inside and out. A really caring, genuine, kind-hearted, hardworking, and truthful woman. She was the best thing that ever happened to me. In 32 years of marriage, she was my rock,” said Ian.

Ian said it ‘breaks my heart’ that he could not be there ‘to bring Bernie back to her beloved Geesala.’

Fr John Loftus said Bernie’s passing has left the area ‘bereft.’ He said everyone’s thoughts are with Ian for a speedy recovery.

“Both you and Bernie have done so much good for Belmullet and for Erris for many years,” said Fr Loftus.

He and Ian spoke of Bernie’s deep faith and her ‘dedication to the service of the sick and suffering’ during her many years working as a nurse in Belmullet Community Hospital. More recently, Bernie had continued providing vital support through her work in a local doctor’s surgery.

“Wherever we are today, we are united in grief and a huge sense of loss,” said Fr Loftus.

Fr Loftus said Bernie ‘lived her life to the full’ and spoke of her love of gardening, walking, and golf. He said that Bernie and Ian had shared a ‘happy and wonderful life together’.

“The love that you Ian shared with Bernie will continue forever,” Fr Loftus added.

A tribute, entitled ‘She was there,’ on behalf of Bernie’s former colleagues at Belmullet Community Hospital was also delivered. A candle was lit and 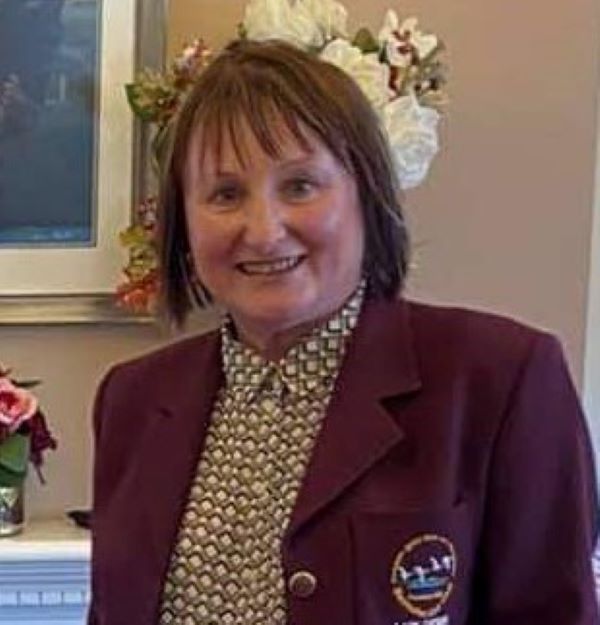 white roses placed on her coffin.

Following Requiem Mass, Bernie was laid to rest this afternoon at Geesala Cemetery.