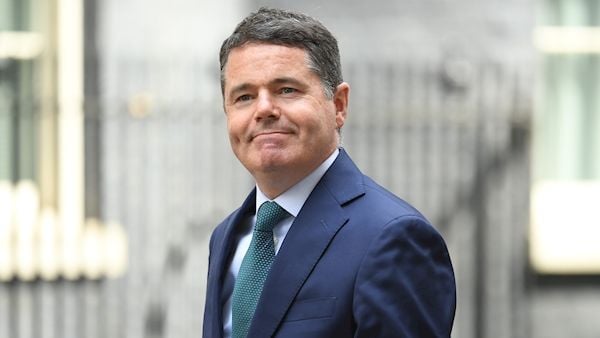 The Minister for Finance has said that making a decision in the coming weeks regarding the holding of Leaving Certificate exams would be “inappropriate”.

Paschal Donohoe said a decision on whether the Leaving Cert would go ahead in the traditional format in 2021 needed to be approached “in a calm and judicious manner.”

The Labour Party has called for a decision to be made by February 1st, citing the fact that the UK has already decided to cancel its state exams this year.

It comes after the Government performed a U-turn on its plan for Leaving Cert students to attend school for three days each week on Thursday night.

“The idea that we can make a decision about a hugely important exam, the Leaving Cert, and indeed also the Junior Cert, very quickly and at speed is something that I don’t believe is appropriate,” Minister Donohoe told Newstalk Breakfast.

“We have a number of months yet to go before we get to the Leaving Cert and we need to approach this in a calm and a judicious manner.”

Labour’s education spokesperson Aodhan O’Riordáin has called on the Government to make a decision on this year’s exams within the month, as “every other jurisdiction in the UK” had already made a call on State exams.

“Are we doing all of this in favour of a written exam in the summer?” he asked of school closures.

Mr O’Riordáin said Leaving Cert students had missed 11 weeks of school in 2020 and there was no guarantee that they would be back in school by the mid-term or St Patrick’s Day.

He said that parents had been prepared “to vote with their feet” and children would not have returned to school next week amid soaring numbers of Covid-19 cases.

He criticised the Government for not consulting with unions prior to making the initial decision to partially reopen schools, and for not getting “a specific sign off” from the National Public Health Emergency Team.

Mr Donohoe separately said that prior to the Government announcement that Leaving Cert students would attend school for three days a week, the Minister for Education had engaged in numerous discussions with unions.

The Government had gone ahead with its announcement with the expectation of an agreement being reached, he said.

However, teachers’ unions met on Thursday and directed their members not to comply with the Government directive for a partial reopening amid concerns over safety for students and staff.

The Association of Secondary Teachers in Ireland (ASTI) has said its teachers will return to classrooms sooner than the end of January if Covid-19 case numbers decrease significantly.

“As soon as numbers go down and as soon as people feel that it wouldn’t be so unsafe to go back to work we would certainly be happy to look at the situation again,” ASTI President, Ann Piggott said.

Minister Donohoe said the Government will now focus on supporting students who are vulnerable or who have special needs while schools remain closed.

It was important to focus on the welfare of children and their needs and to ensure that remote learning met with their expectations, he said.