It’s time for a phoenix to rise from the ashes 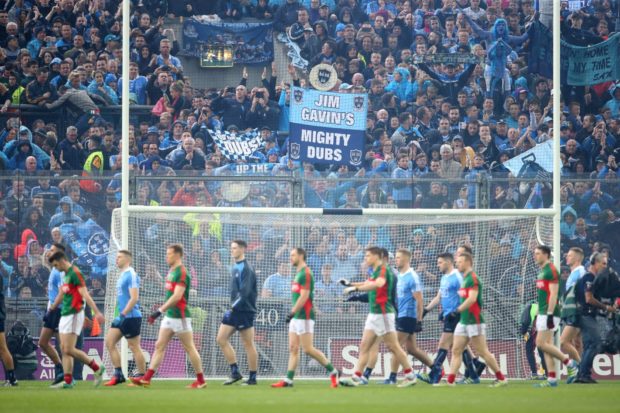 Saturday evening’s All-Ireland final between Mayo and Dublin will be unlike any final to have gone before it. Picture: INPHO/Cathal Noonan

Our usual All-Ireland final rituals have been thrown into the fire. So many of the things we like to do before an All-Ireland have been socially distanced, restricted, masked up. As a consequence, the build-up and the travel-up are changed, changed utterly. But on Saturday evening, can a terrible beauty be born out of the flames?

We are one of the very few counties who have ‘usual rituals’ in respect of the lead up to All-Ireland Final Day. Counties all over Ireland wonder what these could be like. Ours are as well known to us as those for Christmas are to everyone else.

As ever, there will be much talk as to who starts, though with a modification this year that the greatest speculation will be around who gets into the 26. Marty Morrissey will make an appearance for some (socially distanced) flag-waving and yahooing at a school. I will bet every penny you have that the most elaborate green and red facemasks will form a focal point of Marty’s piece for the television news. The sharp-eyed will notice that I bet your money and not mine.

But even with those few rituals retained, so many of the things we love about the lead up to the All-Ireland are gone.

Let us start with the hardest blow, one we must bear with dignity and fortitude. There is no ‘Up for the Match’ this year. This is for the entirely understandable reason that no one is in fact up for it. And if you are, you cheeky devil, you are hardly going to advertise it by planting yourself on the telly.

They must have had a long discussion about this much-loved televisual spectacle. There were options. They could have had a programme called ‘Already Here for the Match’ but it was ruled out: it wouldn’t work because you can’t even have a studio audience. ‘On Zoom for the Match’ was considered but it would only demonstrate how poor the broadband can be in the west.

So, alas, this time-honoured cultural phenomenon will not proceed this year. Instead, the night before the game you can be ‘At Home for the Match’ and listen to Midwest. That, as they say in Italy, is cosa nostra, our thing. The TuneIn App on phones across Dublin will be working at full stretch that evening.

But when it comes to the day itself, we in Mayo will be pleased to come to the assistance of RTÉ, as always. More people watched the Mayo v Tipperary semi-final than the Dublin v Cavan one. There are ten times more people in Dublin than Mayo and we still got more viewers. We are still televisual rock’n’roll, baby. There is no show, as the saying goes, like a Mayo show. The viewing figures for the All-Ireland Final (and the advertising rates around it) will reflect that. We’re glad to help.

What other rituals are gone? One quest more intense than any other: the hunt for the Holy Grail of tickets. Much has been lost: the widespread bafflement around the (low number of) county allocations, with the questions around ‘where do the rest go’ hanging with low menace in the air; the ‘putting down of your name’ with your club; the consequent torture of club officers around the county; the waiting for the revelation as to what you got, if anything; for those who receive a ticket, the muttering about its poor quality relative to one’s devotion and effort (the scale of which is elevated in the eye of the beholder); for those with empty hands, the desperate pleas, not for tickets, but for money for (the no end of) raffles to win a ticket; the anguished protestations by those who are in but do not win of the deepest loyalty to the cause; the late allocation which produces a deluge of tickets from the very air the night before – a mysterious process we call, for want of a better description, the ‘freeing-up’ of tickets. All these great Irish dramas are gone.

There is therefore no need this year for dark whispers about the relationship between the provision of tickets and a gravitational force which might, in more common terms, be described as ‘pull’. There is no good pulling a stroke now to get into Croke Park. If any prominent citizen is seen within there will be not ninety euro for a ticket to pay, but hell.

Many of the ticket debates will go on in house. Rather than swapping a Hill for a Hogan it will be the request to swap you the window chair for the comfy one. Those two options aren’t too bad in fairness. The Upper Davin equivalent this year will be having to sit at the door, with a chair obscuring your view, a long distance from the fire. Being told that ‘at least you can see’, will be poor consolation.

All the rituals around the travel up to Dublin the night before and on match day are also gone on us. The confluence of Mayo people from home and the arrival of our brethren from all over the world makes the night before very special in the capital. The accommodating of all those Mayo souls is the stuff of legend. My own favourite tale is of the night before the 1997 final when, if perhaps not 100,000, there were certainly 100 Mayo men sleeping in my house – waiting, as they were, for the Sam Maguire. There was little enough by way of social distance that night I can tell you!

There will be no pints in the various Mayo friendly pubs around the city the night before, and no breakfasts in Mayo houses in the capital the morning of. We will be united only over distance, and by love, and by hope.

A final word about a personal ritual. As in times before, I will write a piece for this newspaper after the game is over. In my mind, I have the outline of Article A and Article B. You might assume A is the one I want to write, the best-case scenario one, but no. My brother once said to me that if we ever won the All-Ireland, the Croke Park authorities would have to concede the battle to keep the pitch clear of supporters. In that event, the signs around the stadium would read ‘PLAN B’, the signal to open the gates around the pitch. They won’t need to worry about crowds this year whatever happens, but in honour of the PLAN B scenario, let me confirm, dear reader, that it is ‘ARTICLE B’ you will want to read after the final. I say no more. It is dangerous territory.

Lads, you have valiantly tried Plan A over this last decade. We were physically there with you every time. On Saturday, with every single one of us still there in your hearts, hold nothing back, leave nothing standing. Smash down the gates. Smash through the fences. Set Croke Park alight. With all the rituals gone up in smoke, it’s time for a Phoenix to arise from the ashes. It’s time for PLAN B.