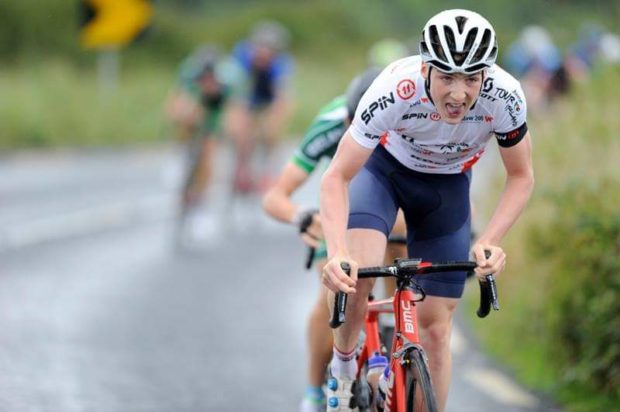 In March of this year, what seems an eternity ago, Eoghan McLaughlin came off the bench scored 1-1 in what was only his second cameo appearance in for Mayo to date.
His tally came as part of a second-half surge which saw Mayo fall just one point short in a defeat to Kerry but the young man from Westport has never looked back, in fact, he has been in the starting 15 for every game since that.

The sight of McLaughlin powering forward from wing-back has been a staple of Mayo’s performances this year on the way to the All-Ireland final. He has courage – see his run leading up to Cillian O’Connor’s second goal against Tipperary – and conviction – demonstrated by him bringing down Shane Walsh, who was bearing down on goal for Galway in the dying embers of the Connacht Final – and what is more, he has just turned 20.

Despite the heroics of his maiden year in a Mayo shirt, there was always a chance that McLaughlin could be representing his area in a different type of jersey.

As it turns out, he was as good on the bike as he has been on the ball.

Once upon a time, not too long ago, McLaughlin was considered by many to be the next big star of Irish cycling. His track record was extraordinary, taking home wins at events such as the Grandflise Juniors in Belgium and the King of the Mountains jersey in the junior tour of Ireland in 2017.

Eoghan was putting his club, the Westport Covey Wheelers, on the map. He was doing so with the guidance and mentorship of people like Anthony Murray. Murray, who is now the Chairman of the Covey Wheelers, had been on a cycling team in Australia having emigrated there and frequently made trips home with the team to partake in races in Ireland. He told the Western People of how he first met Eoghan and watched his progression as a cyclist through the years. 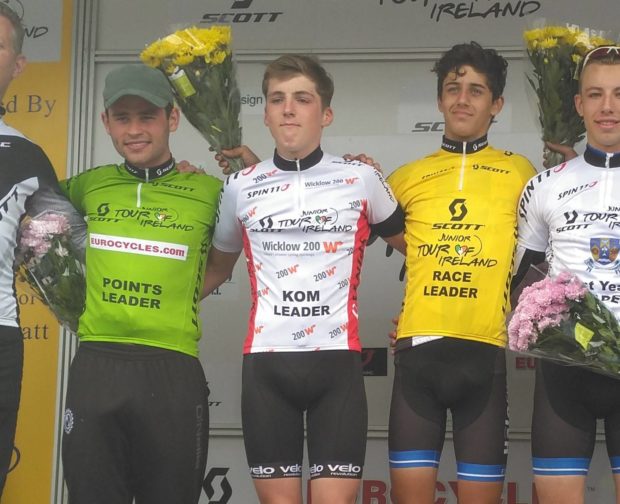 McLaughlin, in white, on the podium during the Junior Tour of Ireland.

“I came back from Australia a few times with my team and as part of that we would have met up with the Juniors from the Covey Wheelers from time to time. Eoghan was one of the Juniors and would have been about 13 or 14 when I first met him.”

“He approached me when he was about 15 and asked if I could give him a bit of guidance and mentorship as he was interested in getting involved more.”

“He was a lovely young fella, good craic and good to be around. From there on, he came along with me to some of the races and I tried to help him out as much as I could along the way.”

It soon became clear that Murray and the Westport Covey Wheeler’s had a prodigy on their hands as McLaughlin’s went on display at various races and challenges throughout the country.

“Cycling’s loss is GAA’s gain,” said Anthony. “Since Eoghan was 15, he started to put his stamp on cycling. He was definitely in the top five in Ireland in his age group and on any given day, he was capable of winning any race.”

“It was clear without a doubt that he had a really good talent for it. When he was 16 or 17 he was getting stronger and starting to race with adults and seniors and developing really well.”

“You can see his speed and athleticism on the field now. The excitement and buzz around Mayo now with how talented a footballer he is, that same buzz was there in cycling circles around Ireland when people were watching him. He was at a national level, we’re not talking about a recreational club cyclist, he was the real deal.”

Eoghan was not the only “real deal” in the town of Westport, or even in the McLaughlin household around this time. His brother Oisin played a key role in the local GAA side that conquered Croke Park and took home the All-Ireland Intermediate title in 2017. The draw towards Gaelic Football was massive and dragged young Eoghan off the bike and onto the field.

He was involved with his school team, a Rice College side that narrowly missed on All-Ireland glory of their own in April 2018 when they reached the final of the Hogan Cup in Croke Park.

“Eoghan was getting picked for different teams and it is easy to get hooked that way,” admits Anthony. “Whatever you do, you have to be happy and I think he was getting more of a buzz out of the football at the time.”

“We’re delighted for him with how he has gotten on. We’re very proud of him, a young lad who came through our ranks and he’s progressed and developed further and further.”

The next challenge that awaits Eoghan is an All-Ireland final and Anthony said his experiences on the bike will bring him a long way against a Dublin team chasing their sixth title in a row.

“From a young age on the bike doing cycling drills, you’re developing your lung capacity and your endurance. We also go through a lot of work in the gym with core training and running in the off-season. Eoghan got a range of the physical attributes you’d need to be a good, strong athlete and it’s a good grounding for anyone.”

“Mentally is the big one,” added Anthony. “I played a bit of football as well but cycling has to be up there with one of the toughest sports out there. You’re talking rain, hail or snow, crashes, long races of 100k plus and there is only one winner allowed with 100 starters.”

“Mentally it sets you up to be a tough competitor. You have to deal with a lot of losses and setbacks and you have to hold onto the small chance of a win.”
These experiences, Anthony concluded, have given Eoghan an edge which will certainly be of a benefit to himself and his Mayo teammates.

“In cycling, the winner is the person who suffers the most. Eoghan has won many races so mentally, we think he’d be ready for any challenge. I wouldn’t like to be the one marking him.” 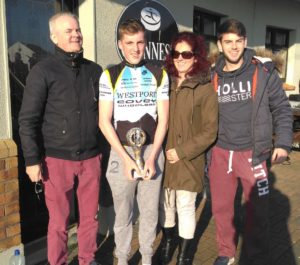 Eoghan McLaughlin with his parents Danny and Fionnuala and brother Oisin.