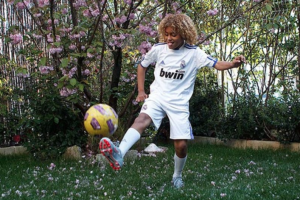 John Joe Patrick Finn was on the books at Real Madrid before moving to Getafe.

When listed among teammates with names like Marc Cucurella, Jaime Mata and Damien Suarez, someone called John Joe Patrick Finn is bound to catch the eye.

The 17-year-old was named among the substitutes as his club Getafe, located in central Spain, took on Athletic Bilbao.

John Joe was on the books at Real Madrid when he was just 12 years old and now plays for Getafe in La Liga – the top flight of Spanish football. What is more, the youngster has Mayo connections.

John Joe’s father John hails from Ballyhaunis and emigrated from the east Mayo town over 20 years ago, with the family regularly returning to Mayo to see their relatives.

Although he didn’t get to make an appearance as Getafe were held to a 1-1 draw, the future bodes well for the young midfielder, who is eligible to play international football with Ireland, Spain and Cameroon.