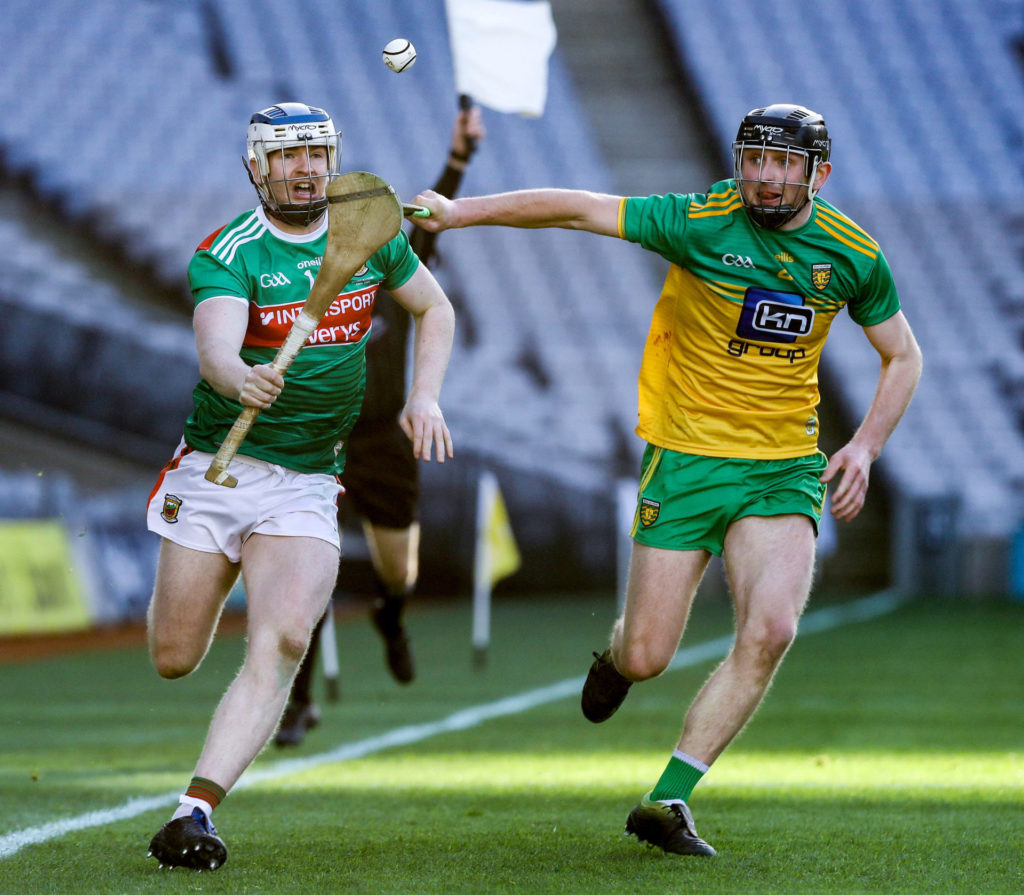 Donegal’s Gavin Browne and Brian Morley of Mayo in a race for possession. Picture: INPHO/Lorraine O’Sullivan

There was bitter disappointment for Mayo in today’s visit to Croke Park for the final of the Christy Ring Cup as they saw an eight point lead wiped out on their way to a 3-18 to 0-21 defeat against Donegal.

Having gone behind just before the second half water-break, the Green and Red fought back to lead again by one point after 65-minutes, however, the concession of two goals in the space of a minute destroyed their hopes of lifting the title for a second time since 2016.

Playing in chilly but dry and exceptionally sunny conditions, Mayo had looked a cut above Donegal for most of the first half and yet only a puck of the ball separated the teams at half-time as a 33rd minute goal helped drag the Ulster side right back into contention.

With seven points from the hurl of Shane Boland in the opening 22-minutes, and Brian Morley tormenting the Donegal full-back line, Mayo were 0-11 to 0-3 in front when came a powerful surge from their opponents. Half-back Joe Boyle drilled 1-1 between the Mayo posts, his goal sneaking past ‘keeper Gerald Kelly from 25-metres, and former Armagh player Declan Coulter, playing in his fifth Nickey Rackard Cup final, hit three points in succession.

But with six different players on the scoresheet, including the entire full-forward line of Morley, Jason Coyne and Eoin Delaney from play, it was still Mayo who held a 0-14 to 1-8 advantage at the turnaround. However, they were never to hit similar heights in the second half, scoring only three times from play.

Anonymous in the first half, Tipp native Davin Flynn was the star man for Donegal after half-time, scoring three points within 10-minutes of the restart, scoring their crucial second goal to send Donegal two points ahead in the 67th minute, and sending in the ball that resulted in a goal for Limerick native Ritchie Ryan 30-seconds later, in what was a devastating – and fatal – blow for Derek Walsh’s charges.