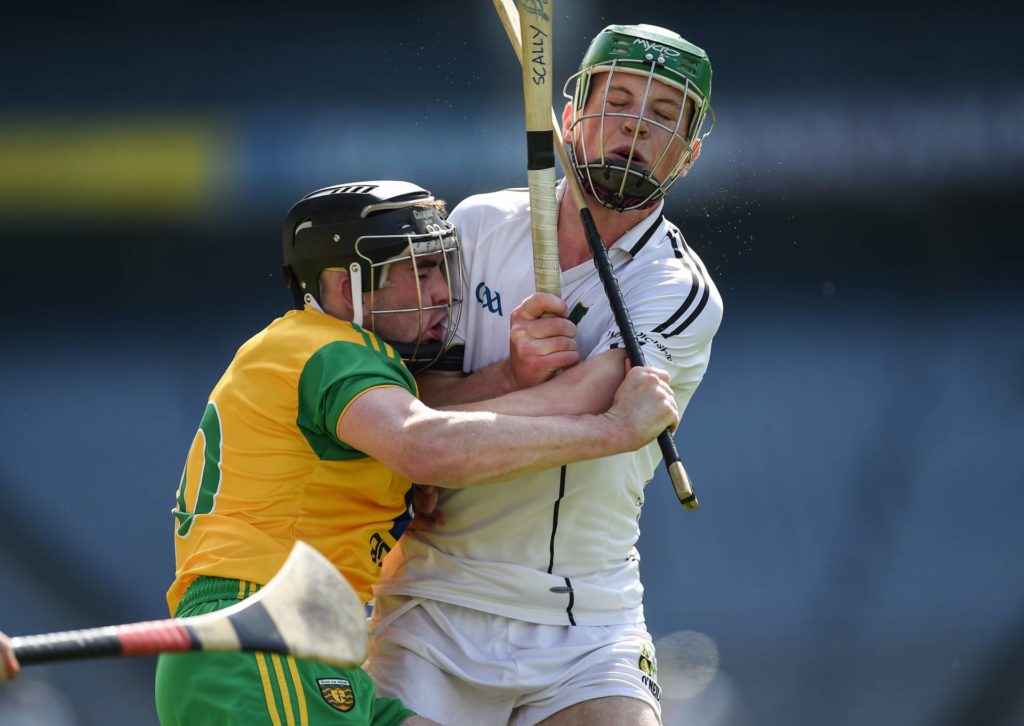 Claremorris native Ciaran Finn is grappling with a bad case of divided loyalties this week. On Sunday, Mayo and Donegal will meet in Croke Park to contest the Nicky Rackard cup final. Finn is a former Mayo hurler but a current member of the Donegal panel and would likely be lining out for his adopted county this weekend were it not for a cruciate injury he picked up while playing football for Claremorris over the summer.
At the moment he is rehabbing from surgery on the injury, hoping to return to work (he is a Garda based in Ballybofey) early in the new year and to the playing fields for Donegal, Tooreen and Claremorris sometime in the spring.
So while he may not have a playing role in Sunday’s final, there are few men better positioned to assess the chances of both teams heading into the decider.
Finn has been based in Donegal since September 2015, first for three years in Letterkenny and now in Ballybofey. He continued to play club football and hurling with Claremorris and Tooreen in the summers and was part of the Tooreen teams that won consecutive county titles between 2017 and 2019.
But the distances eventually made it too difficult to train with the Mayo hurlers, so he joined up with the Donegal squad in early 2017. He was on the team that won Division 3A of the league in his first season, before lining out at midfield on the Donegal side that beat Warwickshire in the 2018 Rackard final at Croke Park.
“It was my first time playing in Croke Park, and my first time being there without a Green and Red jersey,” he recalled of the experience. “It was a great experience, a great game. The fact that we’re going up again with a chance to do it a second time in the space of three years is savage.”
He remained a part of the Donegal squad early this year, helping them to again win Division 3A of the league before lockdown, but the injury has denied him a playing role this autumn. He is still eager to do his bit for the squad, however. 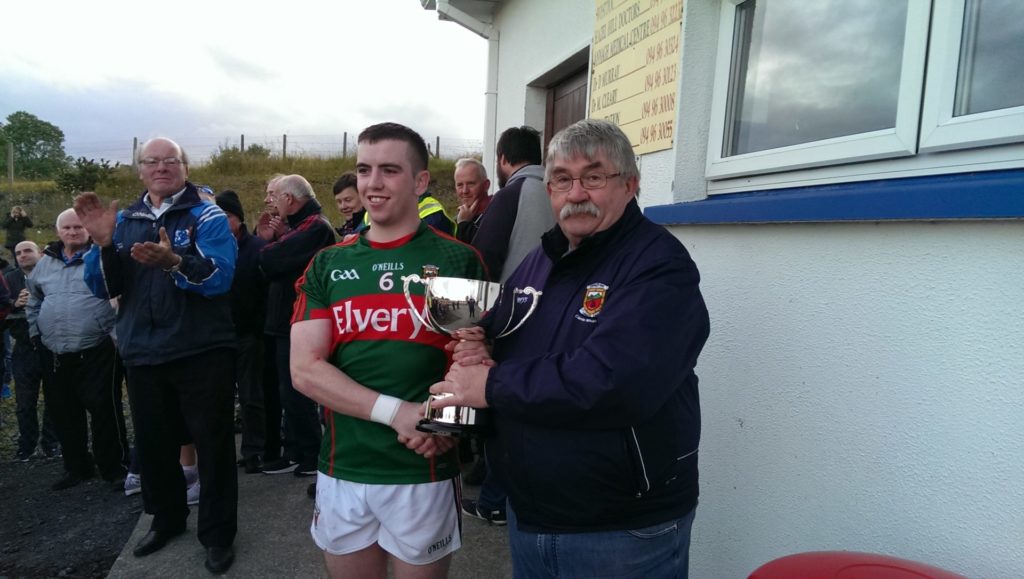 Ciaran Finn receives the cup from Jim Hogan after captaining Mayo to the Connacht under-21 hurling championship title in 2015 with victory over Roscommon in Tooreen.

“I’m still involved, still doing what bits I can to help out. It’s a bit more difficult to get into the games with the restrictions. I’ve been doing a bit of volunteering as a steward, any sort of thing I could do to get into the games,” he said.
The restrictions mean Finn doesn’t yet know if he’ll find a way into Croke Park on Sunday, although he did echo Limerick manager John Kiely in criticising the rule which prevents any squad members outside the match-day 26 from attending games, terming it ‘ridiculous’. 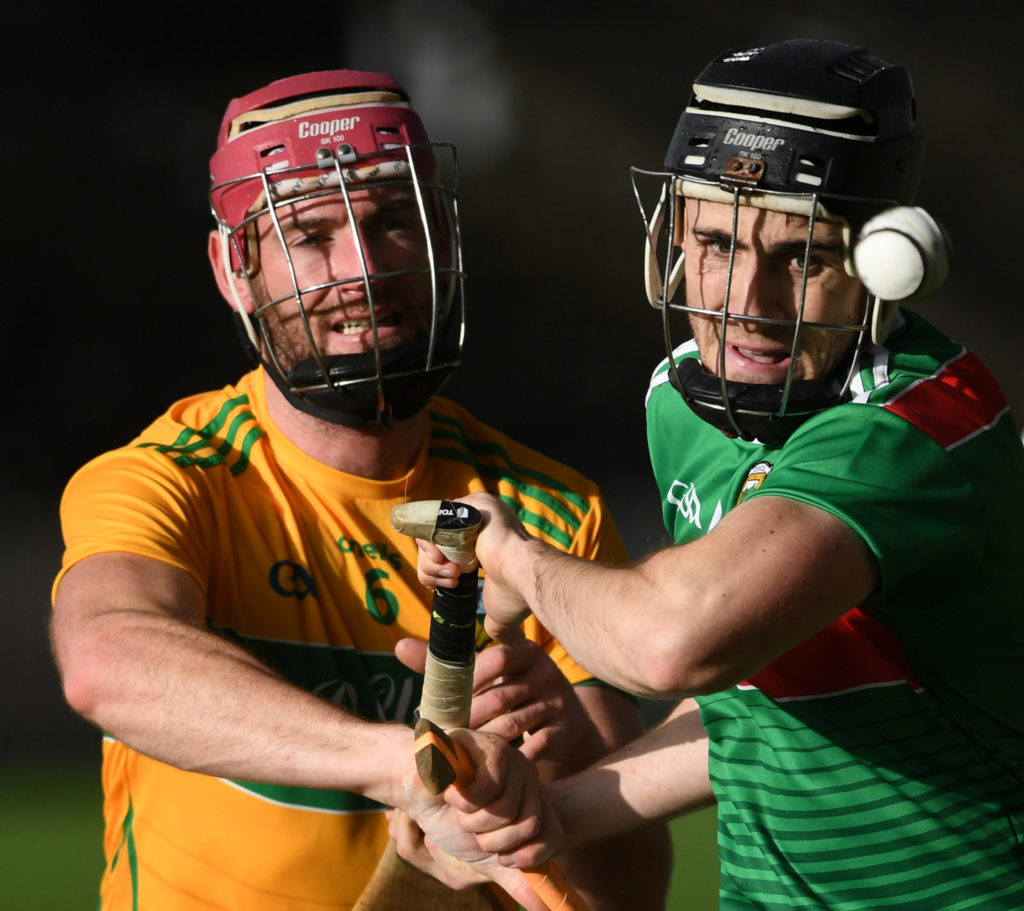 “But it’s obviously not about me this weekend, and I think it’s only right that the Ring and the Rackard are shown the respect they deserve for the finals to be played in Croke Park,” he continued.
“So whether I get to go or not, I’m delighted that the lads get to play there. Hopefully I’ll be able to cheer them on from the sideline and not from the couch!”
On the game itself, Finn doesn’t see too much to separate his former and current teams heading into Sunday’s showdown.
“I think it’s going to be nip-and-tuck. Knowing both sides as well as I do and lining them up in my own head, I think it’s going to anyone’s game. Croke Park will probably suit both teams, both have lots of pace, good hurlers and people that can score from all over the pitch.
“It’s going to be a very interesting tactical game. They’re definitely the two best teams in the Rackard, there’s no doubt about that, and they deserve their day out to see who’s number one,” he offered.
There could be as many as 11 or 12 of Finn’s Tooreen clubmates on the Mayo team that starts on Sunday, while he has regularly hurled against the players from Ballyhaunis and Mitchels.
“Mayo’s half-back line is a powerful focal point for them. They can bypass a lot of teams from there. Sean Regan was back in there at the weekend, David Kenny, Cathal Freeman. Cathal can pass a ball 90 yards from the half-back line into a corner-forward,” he said.
“Then you have Shane Boland at centre-forward, who in my opinion is probably the best hurler in Mayo at the minute and has been for the last couple of years. He’s a hard mark for any man and a lot of the success we’ve had with the club in the last few years has been down to his quality. They have a lot of pace and goal-threats inside too with the likes of Brian Morley and Jason Coyne.”
But he is also confident in the strength of his own team, who are, like Mayo, unbeaten in this year’s championship and will relish the opportunity to play in GAA Headquarters.
“Our back six is very strong and they’ve proven that all campaign. Our midfield is probably one of our strongest positions and could be vital for us,” he offered.
It seems unfair to ask him to call it, but to be fair to Finn, he has no issues nailing his colours to the mast.
“It’s a funny position I’m in, but I’m a man of loyalty to the team I’m playing for,” he stated. “I want everyone to play well, but I’d take a good game and a one-point win for Donegal.”