Mayo’s momentum to Pearse the hearts of their greatest rivals? 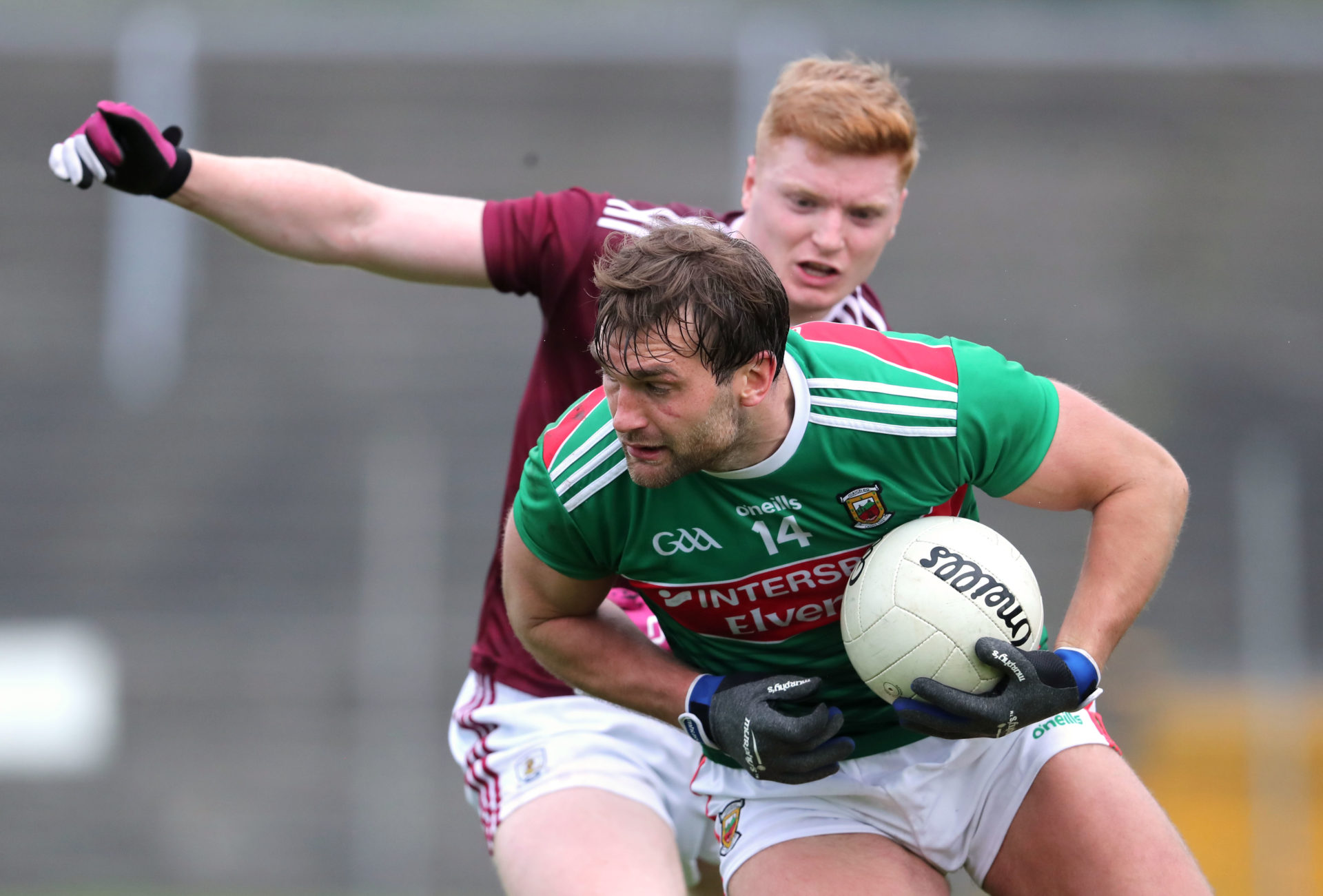 Aidan O’Shea and Séan Andy Ó Ceallaigh won’t be renewing acquaintances in the Connacht SFC final at Pearse Stadium in Salthill this Sunday afternoon, at least not from the start, as Ó Ceallaigh is one of nine players who started the recent Division 1 defeat to Mayo in Tuam who have not been selected by manager Padraig Joyce. Picture: INPHO/Bryan Keane

Mayo and Galway will meet in the Connacht senior football final for the 44th time in Salthill’s Pearse Stadium this Sunday afternoon. Each will be bidding to move one Nestor Cup above the other in the all-time provincial roll of honour, with the two most successful counties in Connacht currently tied on 46 titles apiece.

It will be the first Connacht final between the old rivals since 2014, when Mayo won a fourth title in a row with a 3-14 to 0-16 point win in Castlebar, and a first in Salthill since 2009, when Peader Gardiner’s late point handed Mayo a famous one-point victory.

It will also be the first knockout Connacht final since the year 2000, when Galway overcame Leitrim in Hyde Park, and will be a historic final in a number of ways; the first to be played in November, and the first since 1965 to feature a team playing their first championship match of the year.

In a parallel universe Galway would already have a trip to New York and a victory over Sligo under their belts as they wade in to face Mayo, but with Covid-19 having put the kibosh on both of those fixtures – travel restrictions forcing New York out and an outbreak in the panel torpedoing Sligo – Galway have found themselves in the last eight of the All-Ireland series by default without a ball kicked in anger.

Mayo, in contrast, have two championship run-outs over successive weekends already behind them, away to Leitrim and Roscommon, and the relative advantages and disadvantages of the contrasting routes to the final have dominated the debate in this week’s lead-up.

Are Mayo better off with two games played and momentum built up while Galway come in cold? Or will the Tribesmen be fresh and raring for action while Mayo will be feeling the effects of two matches on sticky winter pitches in their legs?

It’s one for the sports psychologists to mull over, and in truth, a definitive line of answer won’t be taken until the final whistle blows around 3 o’clock on Sunday afternoon.

Another fascinating element of the clash will be the residual effects of the league meeting between the two counties three weekends ago, when Mayo hammered Galway in the league at Tuam Stadium. Padraig Joyce said afterwards that it was the worst performance he had seen from a Galway team in his 43 years on this earth; it will, you suspect, have been mentioned at training this week.

In total, Joyce has made no fewer than nine changes from the team that played that day. Mayo, in contrast, have selected thirteen of the fifteen players who started, with Chris Barrett in for David McBrien at full-back, and Kevin McLoughlin is preferred to Fionn McDonagh at wing-forwward.

Galway will be boosted by the return of some big names. Foremost among them is Shane Walsh, their gifted full-forward who missed the Mayo game but made his return as a half-time substitute the following week in the defeat to Dublin in Round 7. He was a replacement for 2018 All-Star Ian Burke, who was forced out with a bruised ankle, but he returned to training later in the same week and is fit to face Mayo.

The same cannot be said for Damien Comer, who will miss the Connacht final as he rehabs from the hamstring injury he picked up early in the defeat to Mayo. Centre-back Johnny Duane also went off with a knock in that game but is picked in a half-back line that is the only unchanged line of the Galway team from that day. Indeed, the Tribesmen have changed their goalkeeper, two members of the full-back line, one of the midfielders and two of the starting forwards in Tuam, Burke and Paul Conroy, are selected for Sunday.

The way the cards have fallen means Joyce’s first-ever senior championship game in charge of Galway will be a straight knock-out Connacht final against their fiercest rivals. It will be the first real test of Joyce’s credentials at this level. He garnered praise for the attacking style he implemented back in the spring, when four wins from five games propelled Galway to the top of the Division 1 standings, but they have played just two competitive matches since the inter-county game resumed and lost them both, one that 15-point kicking by Mayo and the other a six-point defeat to Dublin in what was basically a dead-rubber game. 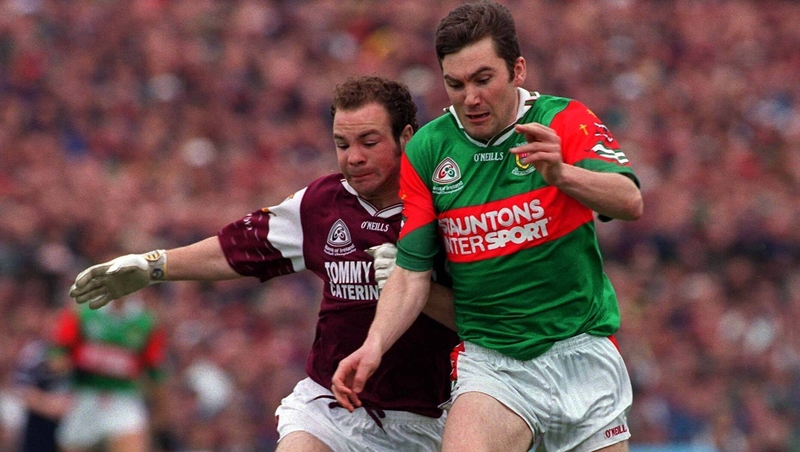 Mayo’s James Horan and Galway’s John Divilly in action in the famous Connacht final of 1999. The two will be on opposite sidelines as part of the management teams of their respective counties this Sunday.

There is a fascinating subplot in store on the sidelines on Sunday, with Joyce, John Concannon and John Divilly pitting their wits against Horan and Ciaran McDonald. Horan, McDonald, Joyce and Divilly all lined out for their respective counties in the momentous Connacht final of 1999 in Tuam, when Horan kicked five points from play and McDonald added another one off the bench as Mayo dethroned the then-reigning All-Ireland champions. It was the last knockout Connacht final between the teams.

They have of course met in knock-out championship since, in last year’s All-Ireland Round 4 qualifier in Limerick, when James Carr introduced himself to the wider world with two goals and Mayo secured a 2-13 to 1-13 win, ending the tenure of Kevin Walsh in the process.

Mayo have changed considerably in the 16-odd months since that game. Mark Moran’s debut against Roscommon on Sunday brought to nine the number of championship debutantes Horan has introduced over the course of the last two games, and Moran is preferred from the start for Sunday’s clash, edging out Ryan O’Donoghue.

The likes of Oisin Mullin, Tommy Conroy, Oisin McLaughlin, O’Donoghue et al have arrived in a Connacht final in their first years as senior footballers. It’s something that bears noting when you consider that established players like Stephen Coen and Conor Loftus have never played in one. Paddy Durcan has never started one.

The end of Mayo’s four-year absence from the provincial final won’t get the hype it usually would this week with the short lead-in and the absence of match-going fans, but it’s still something worth acknowledging. The next step is to finish the job by reclaiming the Nestor Cup for the first time since 2015 and embracing the December possibilities that lay beyond.