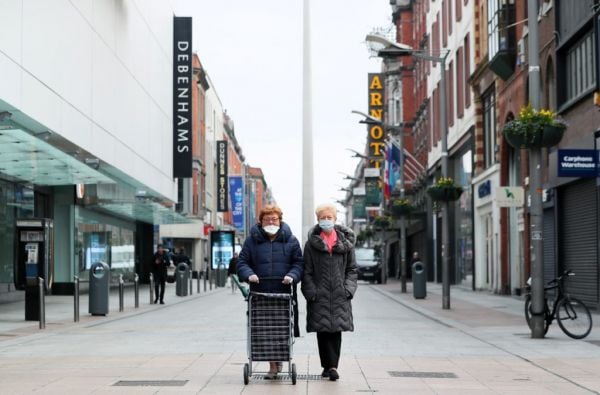 The national incidence rate of Covid-19 has continued to fall and now stands at 129 cases per 100,000 population, according to the latest 14-day report from the Health Protection Surveillance Centre (HPSC).

The report, tracking the disease in Ireland up to midnight on November 12th, found there had been a total of 6,154 new cases confirmed over the period.

Over a third of these cases were linked to outbreaks or clusters, while almost ten per cent were confirmed in healthcare workers.

17 deaths were also seen among confirmed cases over the two-week period, while just under six per cent of cases were hospitalised.

It comes as the number of people being treated in hospital for Covid-19 has dropped by more than a quarter since the end of last month, in a development described as encouraging by HSE chief Paul Reid.

However, the country’s chief medical officer has warned that the trajectory of the virus remains unclear, with cases in older people a concern.

Dr Tony Holohan also noted that while the growth rate of the disease was “currently negative,” Dublin’s rate continued to differ from the rest of the country with a slower rate of decline.

In a letter to Government last week, Dr Holohan said while the key indicators of Covid-19 were improving, it was still “not possible to draw substantive conclusions about the trajectory of the disease at this point”.

He warned the number of cases in older people and nursing homes – despite the current Level 5 lockdown – remained a concern.

Separately, yesterday saw a further seven deaths and an additional 482 cases of the virus confirmed as Dr Holohan issued a reminder of the “unpredictable nature” of the disease.

The figure represented an increase of close to 100 additional cases, compared to the number confirmed the day before.

“The hard work undertaken by all of us over the last three weeks is to be commended, but we must not allow our success to date let us drop our guard against the spread of this disease,” Dr Holohan said.