It’s serendipitous that archive footage by RTE of St Mary’s Secondary School in Ballina has been making its way into people’s social media timelines today. 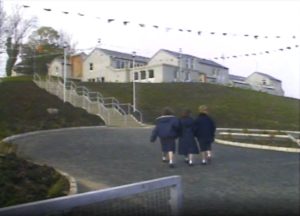 The footage, which was first broadcast exactly 33 years ago today, documents the official opening of the school’s then new building.

Its reappearance this week coincides with work having just commenced on the construction of a brand new state-of-the-art €15m campus on a green field site for  St Mary’s school which has been operating in Ballina since 1880.

The 33 year old news report is stirring up great nostalgia among Ballina people as they marvel at how new the school looks and the remarkable views of the town.

The opening of the current school, which cost €1.5m, on November 12, 1987 made the cut for national news as it happened on the cusp of major cut backs.

The footage features the then principal Sr Attracta who, when asked by reporter Tommy Gorman how St Mary’s SS had realised such a major project at a time when budgets were foremost on everyone’s minds quips: “I suppose if you are well in with your local politicians and you are well in with the Lord.”

You can watch the full clip via this link: http://www.rte.ie/archives/collections/news/21260510-ballina-school-extension