Ballina celebrating as one of its own becomes US president 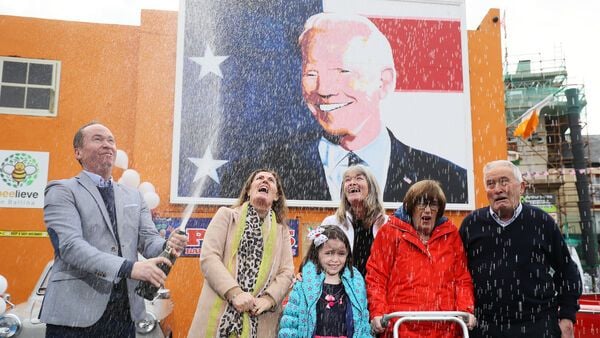 Locals in Joe Biden’s ancestral home are celebrating his election as President of the United States.

The Democrat became president-elect on Saturday after securing the state of Pennsylvania, giving him the required 270 electoral college votes.

Taoiseach Micheál Martin tweeted his congratulations to Mr Biden on Saturday, shortly after his victory was confirmed.

He said: “I want to congratulate the new President Elect of the USA.

“Joe Biden has been a true friend of this nation throughout his life and I look forward to working with him in the years ahead. I also look forward to welcoming him back home when the circumstances allow!”

The town of Ballina in Co Mayo, Mr Biden’s ancestral home, has been decked out in the famous stars and stripes in anticipation of his success. 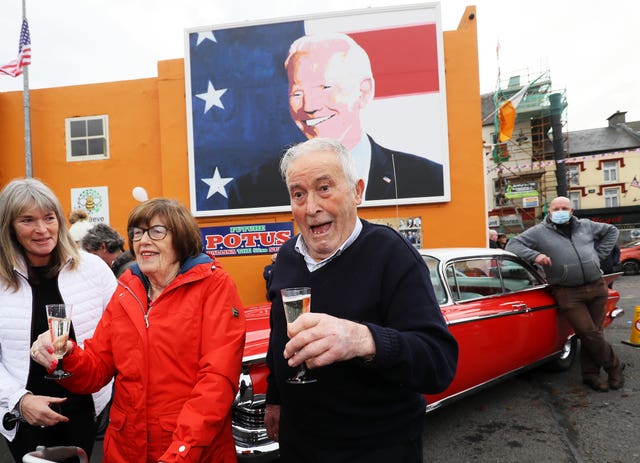 Brendan Blewitt and his sister Breege Bourke (second left) cousins of US president-elect Joe Biden begin celebrating in anticipation of the results of the US election in his ancestral home of Ballina.

The Democrat recorded a historic election victory over Donald Trump, having secured a record number of votes for a presidential candidate, with almost 75 million.

Ballina local Joe Blewitt, a cousin of Mr Biden, was in no doubt that he would prevail.

The election took four days to call as a result of the large number of mail-in ballots due to the coronavirus pandemic.

He told the PA news agency: “I think we’re all pretty confident that’s he’s going to get across the line. It’s just a pity that it’s dragging out so long.”

Mr Trump has attempted to frustrate the process, calling for vote counting to be stopped and launching a number of lawsuits.

He has so far refused to recognise the results of the election.

The approach is not making him many friends in Mayo.

Mr Blewitt said: “Joe Biden is talking about policies, he’s meeting with all the health officials and he’s setting up a plan.

“The other man is still talking about himself. That was always the case with him. It wasn’t about the people, it was about himself.” 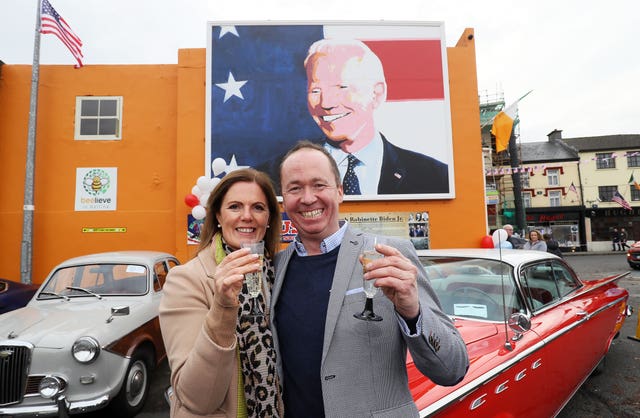 Joe Blewitt, a cousin of Joe Biden, and his wife Deirdre celebrating the US president-elect’s success in the race for the White House. (Brian Lawless/PA)

Mr Blewitt, a heating and plumbing contractor, was invited to the White House in 2017, when Mr Biden was awarded the congressional medal of honour from then president Barack Obama.

He is hoping he will be able to make it over again for the inauguration next year.

He said: “Hopefully we can go back over in January – if he can remove the other man.”

The pair are in regular contact too, with Mr Blewitt remarking: “They’re sound, they’re good people and he’s a really nice fella. He’s good to talk to.”

The festival atmosphere in Ballina on Saturday was a mark of how much Mr Biden’s victory means to the town.

“Now he’ll be the President of the United States, they’re delighted, they’re absolutely delighted. To think one of their own is one of the most powerful men in the world” Mr Blewitt said.

Businesses all over the town, many of them closed due to lockdown restrictions, were all decked out in posters and American flags, while locals sipped champagne in celebration.

It was especially sweet for Beryl McCrainey Slevin, a California native who has lived in Ballina for over 15 years. 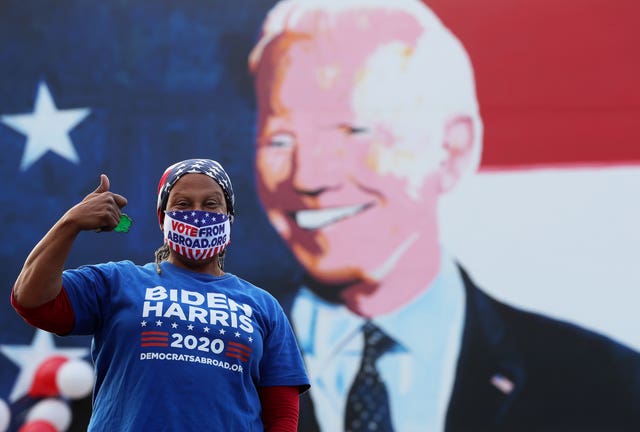 Her hope is that Mr Biden will be able to reunite her homeland after a divisive four years under Mr Trump.

She said: “I’m really, really hopeful. I’m hoping that after this election we can really work on building alliances with everyone in the country.

“We are all American and the ideals of America are so important globally, that I think it’s really important that we come together once again as a nation and continue the work of building the American dream for everyone.”

She added: “For me personally, it will bring back dignity to the White House. Hopefully it will bring about the necessary changes in terms of systemic racial problems that we’re having and have had historically in America.

“I also feel very strongly that Joe Biden is in a place now that he’s ready to do serious justice reform, police reform nationally.”

She met with Mr Biden when he visited Ballina while serving as Vice President and is looking forward to his return.

“The town just went bananas. It was just so exciting to have him here. Everybody was out, the children were out, schoolkids were out to greet the plane over at Knock. 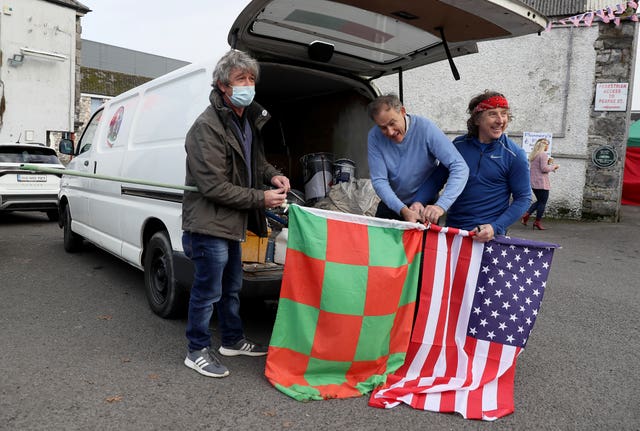 Residents of Ballina begin celebrations in the ancestral home of Mr Biden.

“Really for all of Co Mayo it was amazing, but in particular for Ballina. You feel like he’s one of us, he’s one of our own” she said.

She added: “They were just warm, wonderful people. I’m excited for the town and the future of the town.

“I’m excited for America, even though I live here. It’s the country of my birth, and you always want the best for home. Absolutely, a double win.”

Meanwhile, Joe Blewitt is not ruling out the possibility of a Joe Biden plaza in Ballina – similar to the one built in Moneygall to honour Barack Obama when he visited his ancestral home.

“Yeah I we’ve got messages coming in now, where are we going to put it? It’s great craic” he said.

Mr Biden’s great-great-great-grandfather Edward Blewit emigrated from the town almost 200 years ago, having worked as a brick-maker and as a civil engineer helping to map Ireland.

Ten of his 16 great-great grandparents were also born in Ireland.

A mural of Mr Biden, which overlooks the main square in the old market town, was recently created by local artists Smiler Mitchell and Leslie Lackey.

After the unveiling, Mr Biden pledged to revisit the town if he wins the election.

“Sabina and I, and the staff at Áras an Uachtaráin, have the warmest memories of Joe Biden’s two visits to us.

“The bonds between the peoples of Ireland and the United States are close and strong, and I look forward to our two countries working together to rebuild the much-needed trust in the methods and institutions of national and international solidarity and cooperation.”