Mayo reveal their hand ahead of championship showdown 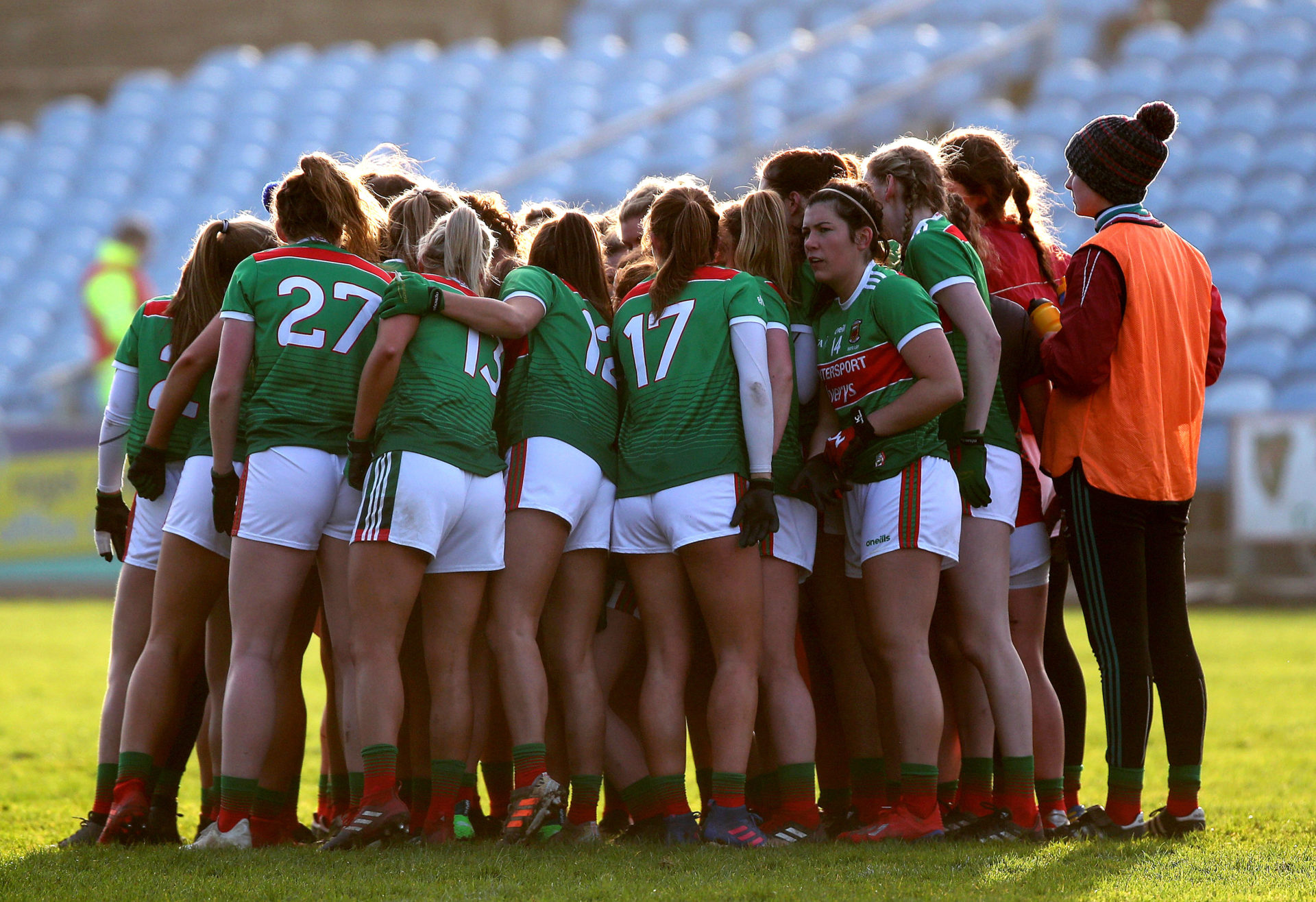 The Mayo ladies begin their 2020 championship campaign this Saturday afternoon when they take on Tyrone in Carrick-on-Shannon. Picture: INPHO/Bryan Keane

The Mayo ladies make their long-awaited return to competitive fare this Saturday as they take on Tyrone in Páirc Seán Mac Diarmada, Carrick-on-Shannon (1.0 – Live on LGFA Facebook), and manager Peter Leahy has named nine of the team that lined out from the start against Galway in last year’s All-Ireland senior semi-final.

Mayo lost out by just a single point on that occasion and there are call-ups for goalkeeper Laura Brennan, Saoirse Lally, Roisin Durkin, Ella Brennan, Maria Reilly and Tamara O’Connor. From the team that started in that match against Galway, goalkeeper Aishling Tarpey, Danielle Caldwell, Kathryn Sullivan, Ciara Whyte, Niamh Kelly and Fiona Doherty drop out.

Tyrone have made just one change from the side that lost out to Armagh last Friday night, as Laura Kane replaces Shannon Lynch between the sticks.

Mayo were enjoying a promising National League campaign early in the spring before the season was paused and ultimately cancelled. They played five games and won three, overcoming Donegal, Waterford, and Westmeath and losing to Dublin and Cork. Their Round 6 clash with Tipperary and Round 7 trip to Galway, which could potentially have secured them a league final place, were both called off with the onset of Covid-19.

The pandemic means the ladies haven’t played a competitive match since that victory over Westmeath in Swinford on March 8, which ended in the unusual score of 0-10 to 2-0. By the time Saturday comes around, they will have waited a full eight months for a meaningful game.

The provincial competitions have been done away with for this year’s championship, with the 12 senior counties having instead been drawn directly into four groups of three teams who will play one another in a round-robin system.

Mayo have been drawn into a group with Tyrone and Armagh and were given the Round 1 bye, meaning Peter Leahy and his management team had the benefit of being able to watch both of Mayo’s group stage opponents when they met in Cavan’s Breffni Park last Friday night.

Mayo lost out to Galway in last year’s All-Ireland semi-final in agonising circumstances, when Rachel Kearns’ looked to have earned a last-minute free to force a draw only to have it overturned for a double-hop in the build-up. Galway went on to lose the final to Dublin, who claimed their third title in-a-row.

Last year’s four semi-finalists — Dublin, Galway, Cork and Mayo — will begin this season as favourites for the All-Ireland. The four have all been drawn in different groups, meaning a strong possibility of the same four teams making the semis in 2020 as did in 2019. Dublin and Galway both won their Round 1 games over the weekend (against Donegal and Tipperary, respectively) while Cork also had a Round 1 bye and will begin their Group 1 campaign against Kerry this Saturday.

Mayo last played Tyrone in last year’s group stages, when they recorded a narrow win in a high-scoring game in Omagh which set them on their way to topping the group. First-half goals from Grace Kelly and Rachel Kearns and another from Kearns in the second period gave Mayo a 3-14 to 3-11 win. They subsequently met Armagh, the third team in this year’s group, in an All-Ireland quarter-final. Armagh came into the game off the back of a huge upset win over Cork but Mayo emerged on top by 2-12 to 1-12 in Longford, Sarah Rowe and Maria Reilly grabbing the goals.

Armagh overcame Tyrone in the first game in the group on Friday night, with Aoife McCoy grabbing a hat-trick for the Orchard ladies in a 6-16 to 3-13 win. Niamh O’Neill was the main attacking threat for Tyrone, kicking 2-4 from play, while Chloe McCaffrey weighed in with 1-4. The defeat means Tyrone must win against Mayo this weekend to keep any hopes of qualifying for the semi-finals alive. 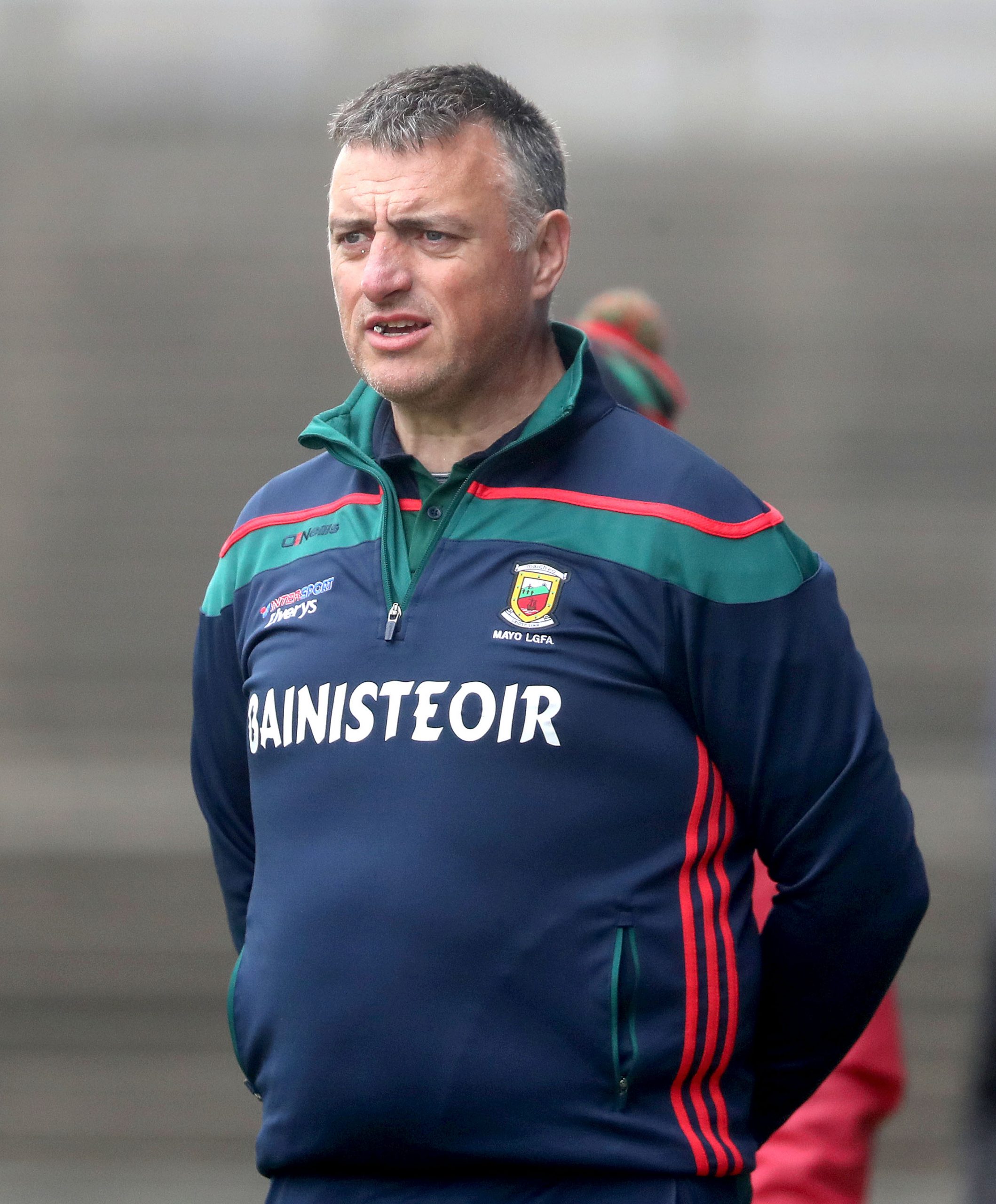 Peter Leahy has a relatively full deck from which to choose for this condensed championship campaign, in which Mayo, theoretically, could claim an All-Ireland title with just four wins. The players who were absent during the league while playing in the AFL — Sarah Rowe, Aileen Gilroy and Niamh and Grace Kelly — are home and available for this weekend. Grace Kelly required surgery on an anterior cruciate ligament injury she sustained while playing for the West Coast Eagles in March and had been in a race against time to be fit to play in the championship, but has been selected at No.10 with Sarah Rowe on the opposite wing. Aileen Gilroy is selected at midfield with Dayna Finn moving to centre-back although there is no start for Niamh Kelly.

Leahy made liberal use of the unlimited substitutions rule in this year’s league — in the game against Waterford, for example, no fewer than 26 players took the field for Mayo.

Mayo will be hopeful of resuming their season with a win in Carrick to set up what would amount to an All-Ireland quarter-final against Armagh the following weekend.