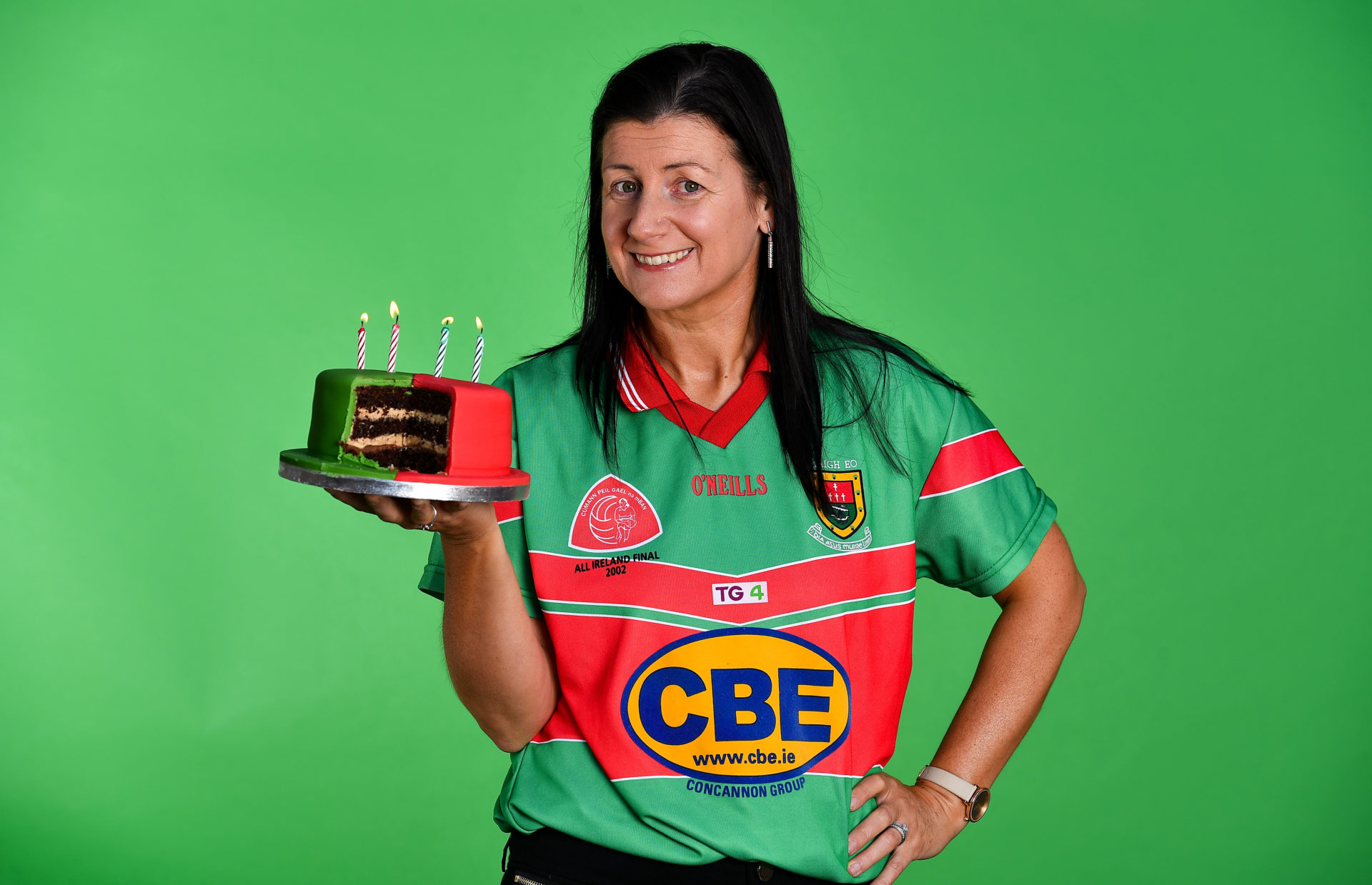 Former Mayo captain Christina Heffernan believes this year’s All-Ireland ladies senior football championship, which begins this weekend, is as open as it has been in some time. Picture: Brendan Moran/Sportsfile

21 years ago this year, when a young Mayo ladies team broke through to claim the county’s first All-Ireland senior title – the first of four in a golden five-year stretch – the official crowd at Croke Park was recorded as in the vicinity of 15,000. It was a decent figure in the context of the times, but when you consider that it would be dwarfed by the 56,000 people who turned out for the Dublin v Galway All-Ireland last year, you begin to appreciate the steps the ladies’ game has taken in the space of two decades

The final of this year’s championship, which begins this coming weekend, will obviously have no spectators present. But good news for ladies’ football fans came this week when TG4, who are marking 20 years of partnership with the LGFA, announced that they will be broadcasting all 42 matches in the senior, intermediate and junior championships across their various TV and online platforms.

Christina Heffernan was a member of that all-conquering Mayo team of the late 1990s and early 2000s, captaining the team to the All-Ireland of 2002. Speaking this week at the launch of the 2020 championships, the Hollymount native reflected on the development of the ladies’ game in terms of coverage and profile over the last 20-odd years.

“It’s a slow progress, since when we started out in 1999 and TG4 came on board in 2000. Back then it was just the All-Ireland final being broadcast, but now they’re bringing our game globally. I do believe we’re getting there,” said Heffernan.

“It is a lot slower than the men’s, but it’s increasing every year the figures of people tuning in to watch and attending the games. So while it is slow, it’s still getting there, and it’s a good time to be playing ladies football.”

This year’s championships will be played behind closed doors but Heffernan believes that there is an opportunity there for the LGFA to reach out to new fans who can watch their games during lockdown.

“Because of the pandemic I’m sure there will be a lot more games televised, so that can only increase ladies football even more,” she reasoned. “I suppose it’s just getting the word out there and hopefully the support will follow. There is a great interest in football, whether it’s men’s or ladies.”

Heffernan said that this year, of all years, could be a prime opportunity for a potential outsider to come from nowhere to claim the All-Ireland. The four semi-finalists from 2019 – champions Dublin, Galway, Cork and Mayo – will begin the season as favourites but the fractured season should make for an unpredictable championship.

“I think you could have a new team there winning the All-Ireland,” said Heffernan. “It’s wide open.

“Nobody has seen what’s been going on up to now, what training teams have been putting in. I think you could easily get a team on the hop on any given day.”

Mayo are definitely included in the cohort of teams Heffernan believes could go all the way. They have been drawn in a group with Tyrone and Armagh but won’t see action until Round 2 the weekend after next (November 7) when they take on Tyrone in Carrick.

“I had the pleasure of training a few of them young ones – they’re not young anymore – in 2011 when we won the All-Ireland B title. The likes of Sarah Rowe, the Kelly sisters, Aileen Gilroy,” recalled Heffernan. 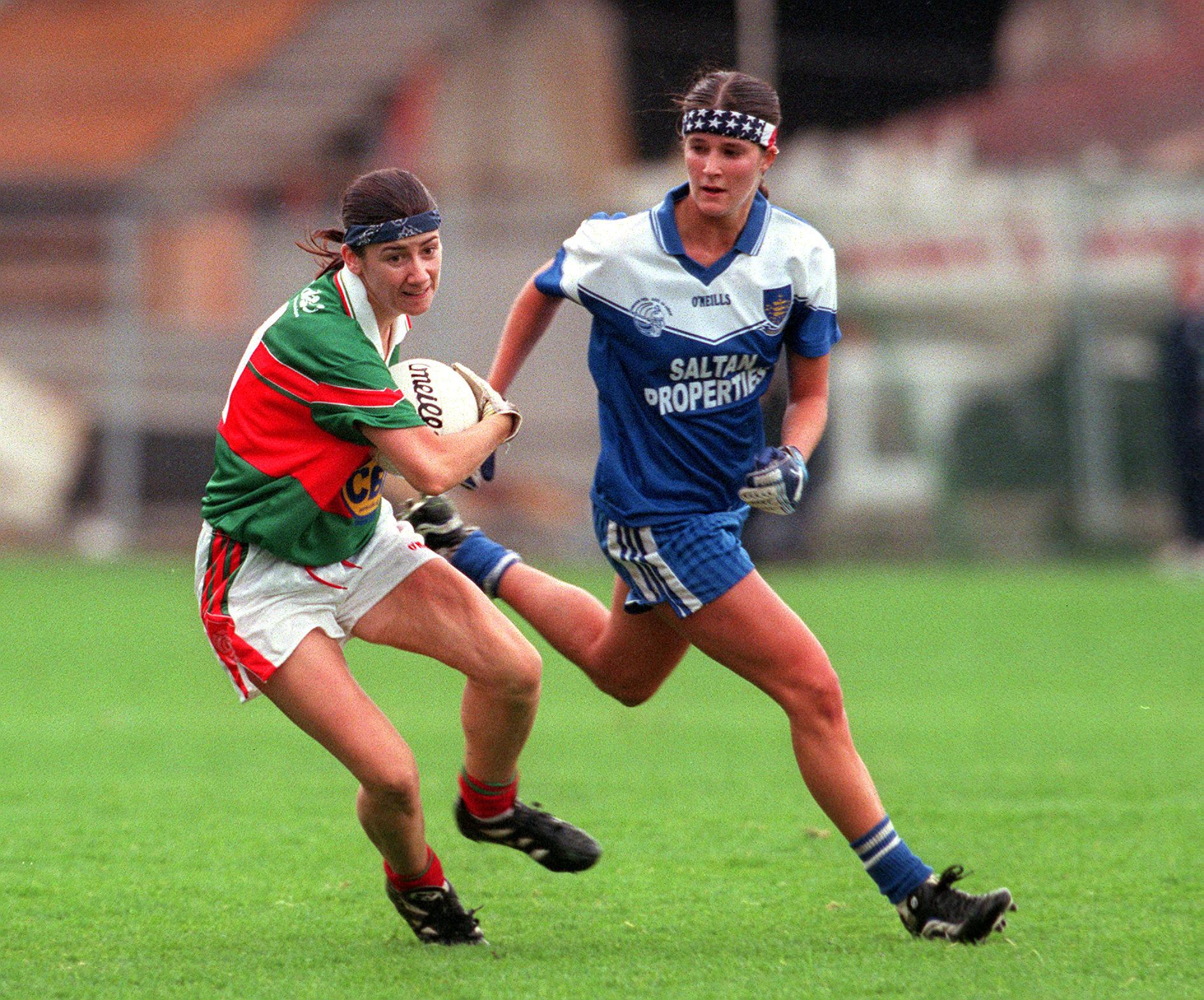 Christina Heffernan on the attack in the 2000 All-Ireland final between Mayo and Waterford. Picture: INPHO/Lorraine O’Sullivan

“They’re all big players who have been around a while now. I do think the likes of them girls will pull Mayo through on any given day this year. I think they’re on the verge of coming big again.

“It’s a tough group but I do still think Mayo will be strong enough to come out of it. The girls haven’t had a game all summer and I think they’ll be very eager to get going. Anything is possible and they’ll be giving it their best shot.”

Heffernan said Mayo manager Peter Leahy has shown that he is not afraid to give young players their heads in big games, a strategy that could pay handsome dividends this year.

“He’s not afraid to bring in young players, and he’s not afraid to take off players either that aren’t performing well on the day. I think that will stand to Mayo. With Peter you have to be on your game or you won’t be on that team. It’s a great attitude to have,” said Heffernan.

“There’s always room for improvement. A lot of it will be down to the girls’ attitude; there’s only so much Peter can do. I’m sure they’ll be giving it 110 percent because these opportunities don’t come along often.

“Back in 1999 when we won our first All-Ireland, we had lost so many big games leading into that, but every one of us gave our heart and soul to that game against Waterford in Dublin. That was what pulled us through in the end. If there’s that belief there in the Mayo ladies, I can see them going a long way.”

Heffernan has been at the coalface of the battle against Covid-19 since March, working with the HSE out of Castlebar. She works in the registration department and said that while she has been able to carry on with her work throughout the pandemic, it has been a desperately hard seven months for the frontline staff.

“It’s been quite difficult,” said she. “We’re still working behind closed doors, so I’m still going on as normal. Everything takes a bit longer and a bit slower but we still get there. That’s the great thing about being in the HSE; I can still get up and go into work and carry on as if things are normal, to a certain degree.

“Hopefully early in the new year things might get back to normal and we’ll be able to have the public into us. It is difficult for those in the hospitals and on the frontline, they are giving a lot of hours. Everyone’s lives are at stake really when you’re in the HSE so hopefully we’ll bring down the numbers in the next few weeks.”

Her job in the HSE and her role as an underage coach with her native Hollymount club has given Heffernan a unique perspective on the impact the pandemic has had. She said that the GAA has provided people with crucial supports over the course of Covid-19.

“You only appreciate what is taken away from you, and this year more than ever we appreciate having the football,” she said.