Relegation leaves Mayo with questions to answer for championship 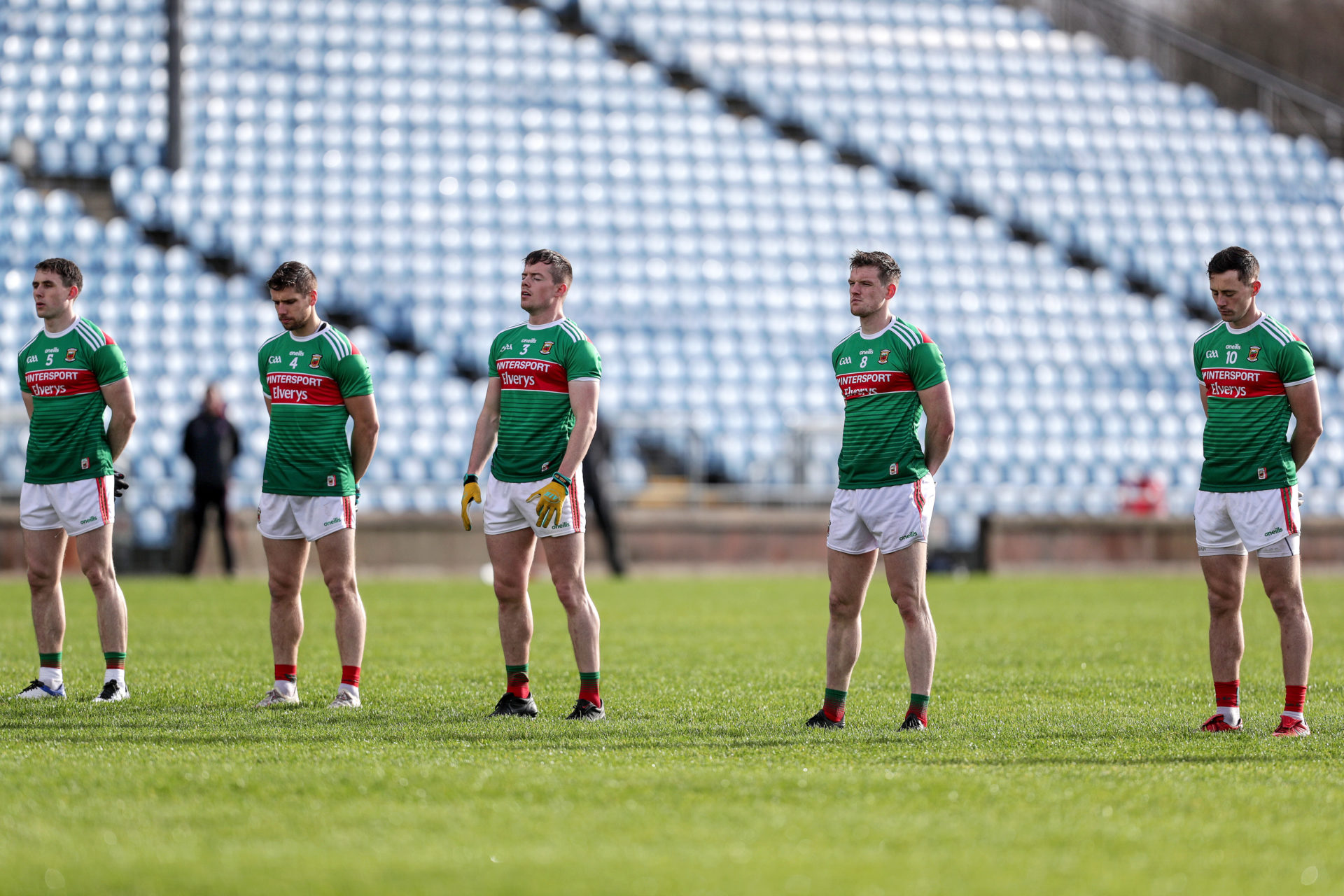 Mayo players stand for the National Anthem before their National League clash with Tyrone on Sunday.

“One day you’re cock of the walk, the next you’re the feather duster.”

Mayo certainly had their plumage plucked in MacHale Park on Sunday afternoon, the hype and optimism engendered by a thumping win over Galway just seven days earlier replaced by the dull dread of playing the likes of Clare, Westmeath and Down in next year’s league.

Out the door went a lot of the talk of Mayo making a sneaky All-Ireland bid this winter. Out the door too went the altogether more cherished record of a continuous stay in the top division of the league, a residency stretching back all of 23 years.

Mayo came into these two leftover league games odds-on to go down but the manner of the victory over Galway in Salthill, and the fact that Mayo held their fate in their own hands ahead of the visit of Tyrone, had many of us believing, or simply assuming, that they would do enough to escape the butcher’s knife once again. God knows they’ve had enough practice at it over the last few years.

Add in Tyrone’s so-so showing against Donegal the previous weekend and their repeat date with Tir Chonaill in the Ulster championship this coming Sunday, and the outcome seemed almost predestined. Tyrone are up and down the divisions like a yoyo; they won’t mind either way. Mayo have a proud and noble lineage to maintain.

Of course, that wasn’t how it went. Two first-half goals and a calamitous third in the second period created a gap just too wide for Mayo’s high-wire act to bridge. Despite the late rally, the clock outran them. 70 minutes and 23 years ended all at once.

In reality, Mayo’s relegation didn’t just happen on Sunday. As mentioned, they were hanging by a thread before the inter-county game resumed, suspended for seven months of lockdown on the edge of the cliff. Still technically the reigning champions but one false move away from the plunge.

Mayo lost their Division 1 status in the spring. In hindsight, the game against Monaghan was the key, a 2-16 to 0-13 loss in Clones in which Mayo gave probably their worst display of the year. In the end, Monaghan stayed up on six points while Mayo went down on five.

It’s interesting to note also that all five of those points were garnered away from home, in the wins over Galway and Meath and the Round 1 draw with Donegal. Mayo played three games at home in the league and lost them all. Granted, two of those defeats (to Kerry and Tyrone) were on one-point margins, but it’s still the continuation of a trend that has been an issue for a number of years now, Mayo being turned over in MacHale Park. Whether it’s in front of 15,000 screaming fans or an expanse of empty seats, the results just aren’t coming in Castlebar.

James Horan insisted after the game that the loss and the relegation won’t be factors in the 2020 championship campaign that begins this weekend, and he could well be right. The most tangible benefit of playing in Division 1 is the exposure to the top teams it affords and Mayo can at least put the lessons of this defeat to quick use when they make the trip to Carrick this Sunday. 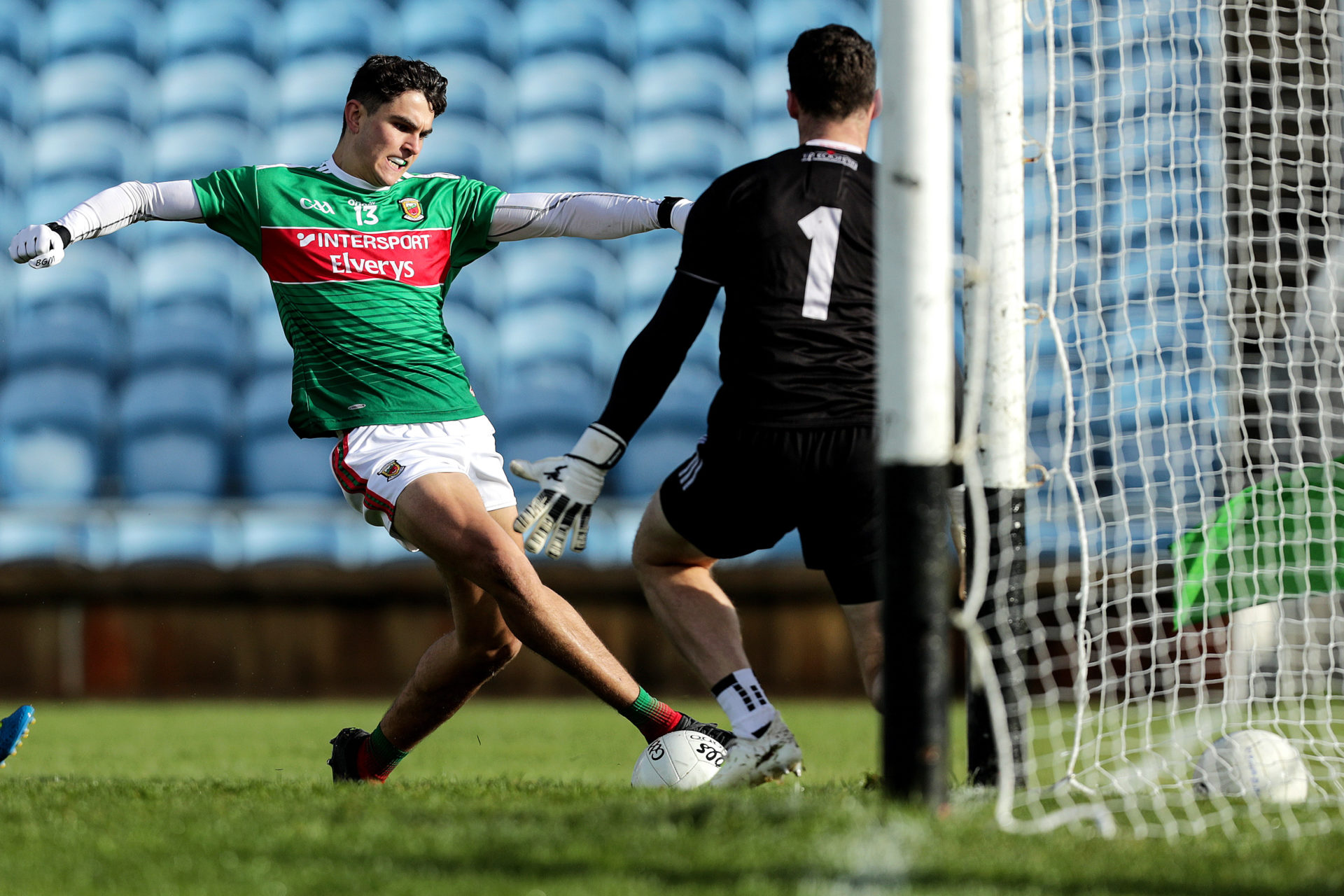 Tommy Conroy kicked 1-3 from play on Sunday, helping to make him Mayo’s joint-top scorer over the league campaign in his first season as a senior. Pictures: INPHO/Laszlo Geczo

The lessons? Mayo have a kick-out problem, certainly. Tyrone didn’t even have to press particularly hard to cause huge problems for David Clarke on Sunday. Conor McKenna’s second goal was a direct consequence of Clarke attempting a restart that simply wasn’t on and while it would be wrong to scapegoat a player of Clarke’s immense experience for one bad game, it would be naive to think the issue won’t rear its head again in the next few weeks.

The half-forward line is another area Mayo will need to look at. Mark Moran, after his dazzling debut in Tuam, was introduced to an entirely different side of inter-county football on a wet, windy day against Tyrone defenders that went for the throat at the first sniff of a turnover. He and Bryan Walsh were both taken off at half-time and the likes of Ryan O’Donoghue, Fionn McDonagh or the yet-to-be-seen Fergal Boland could be given the chance to start next weekend.

Mayo’s match-ups were off the mark too. Kevin McLoughlin was assigned McKenna from the start and the former AFL man won the battle hands-down, proving simply too strong and too direct for the Knockmore man on the day. Likewise Oisin Mullin had probably the most difficult day of his burgeoning Mayo career to date trying to track the movement of Darragh Canavan and found himself badly caught out for the second Tyrone goal.

None of this is to deny that Mayo had positives to take from Sunday’s game. Tommy Conroy looked like a young man absolutely relishing the fight, his 1-3 from play helping to make him Mayo’s joint-top scorer over the full league campaign in his first season as a senior. There was another fine showing too from Eoghan McLoughlin, while O’Donoghue impressed after coming on at half-time and Stephen Coen gave another display of quiet authority in defence. The Holly-Carra man has become a first-pick in the Mayo backline almost without anyone noticing.

Ultimately relegation is no disaster for Mayo; they’ll be back in the top division before too long. And you can be sure that Horan and his selectors found out an awful lot more about a team that is still in a building phase on Sunday than they did in Tuam a week earlier.

The focus will quickly turn to the championship and if Mayo can make a run into December, nobody will be too fussed about going down in the league. 23 years is a neat fraction of 69, after all.

What damage the relegation might cause will come next year, when Mayo will miss out on the chance to test themselves early in the season against the Dublins and Kerrys of this world. The gap between Divisions 1 and 2 is no chasm but it remains the case that no team has won an All-Ireland after playing their league football outside of Division 1 since Armagh did it in 2002.

That all supposes that the leagues proceed in their usual format in 2021, which is no guarantee in the current climate. There has already been talk of regional leagues being played instead to limit the amount of cross-country travel. And the wider topic of the restructuring of the GAA calendar could have seismic effects on when and how the leagues are formatted. While the prospect of finishing this year’s inter-county season is still far from certain, planning for next year’s is almost impossible

Mayo will swallow the disappointment of relegation quickly and turn their thoughts to Leitrim in Pairc Sean this Sunday. When all is said and done, it’s only the league.