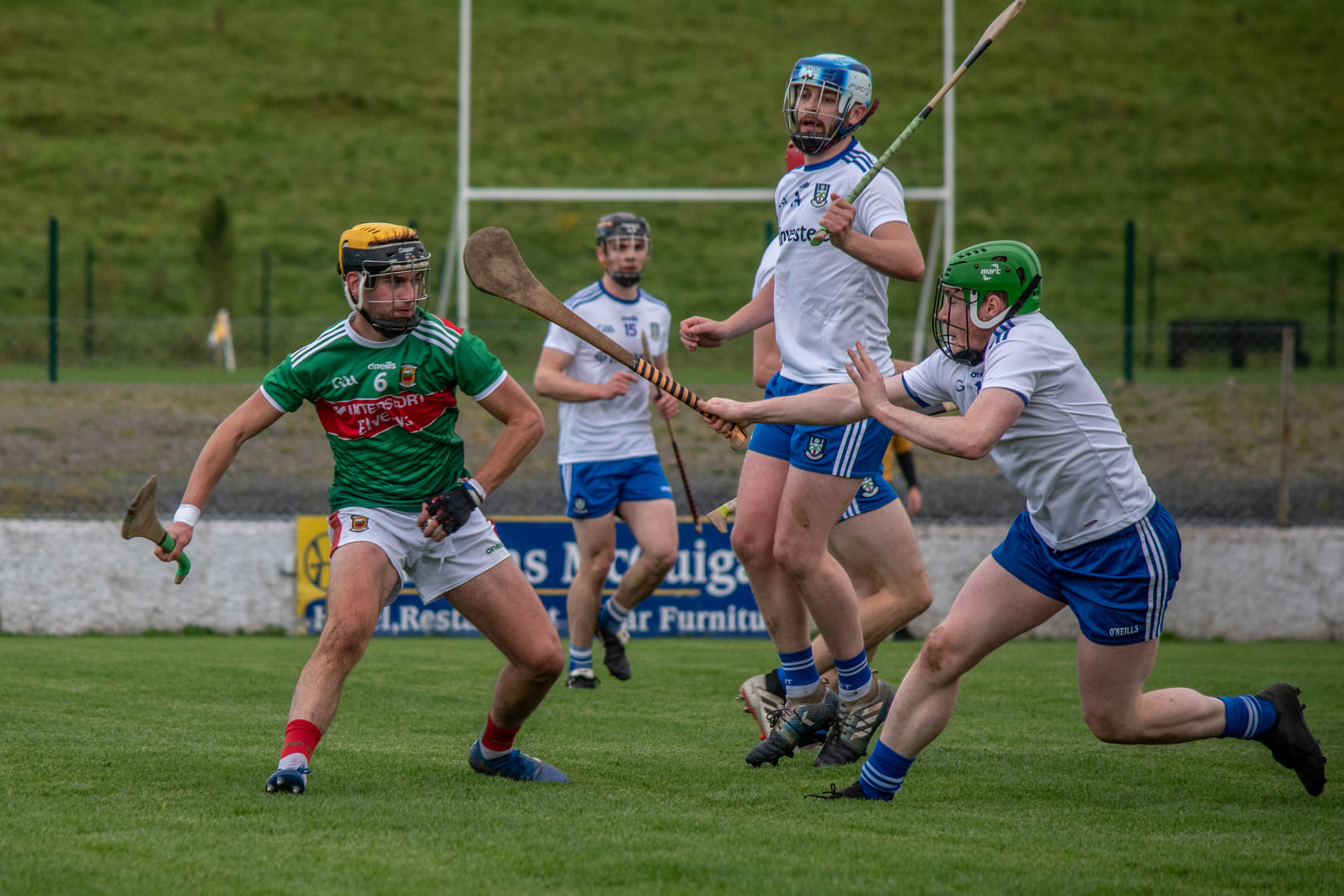 The accepted wisdom floating around this week in the lead-in to the hurling championships was that wet hurls and winter pitches would prevent teams from racking up gaudy scoring tallies. Apparently the message never made it through to the Mayo forwards.

Mayo moved their Nicky Rackard campaign off to the best imaginable start on Saturday afternoon with a thorough dismantling of Monaghan in Clontibret. Not alone did they breach the 40-point barrier; they had a full 25 points to spare over a host side who simply couldn’t contain Mayo’s free-wheeling forward line.

This was the hurlers’ first competitive game since their league closer against Meath back in March and, remarkably, their first championship outing since a draw with Sligo scuppered their Rackard plans in June of last year. But the club championships, as well as challenge game victories over Leitrim, Sligo and Roscommon in recent weeks, had honed the Mayo forwards to a razor-fine edge and they returned to championship hurling like bullocks to the spring meadows.

Shane Boland top-scored with twelve points; Jason Coyne clipped four from play and both Adrian Philips and Sean Kenny weighed in with three. Cathal Freeman had 1-1 from wing-back and also forced a Monaghan own-goal, while Brian Morley and Cormac Philips came off the bench in the second half to clock 1-1 and 0-3 respectively. In total, twelve different Mayo players got their names on the scoresheet, four of them after coming in as substitutes.

Derek Walsh was able to send forth something close to his strongest side. Sean Regan is injured and Kenny Feeney is away, and neither Keith Higgins nor Fergal Boland are in with the hurling panel, but otherwise Walsh had a full deck from which to choose. Morley was an injury doubt before the game but he came in for Corey Scahill at half-time and looked to be moving freely.

The starting team included just three players from the Ballyhaunis team that won the Tyrell Cup last month and nine from the Tooreen side they beat in the final. Mitchels had two representatives (Scahill and Seanie Mulroy) while Gerald Kelly from St Thomas’ in Galway was the only ‘outside man’ in the match-day 26.

Conditions were perfect in Clontibret (or as perfect as they could be in the last week in October) with no rain and a fresh wind that swirled around into Mayo faces in the opening half. But despite the breeze, it was patently clear from early in the contest that Mayo had too much for the Ulstermen here. The physicality of Huane, Mulroy, Freeman and David Kenny afforded Mayo a platform of possession in the middle of the field and Boland, Coyne and Eoin Delaney quickly settled into their rhythms in the inside line. 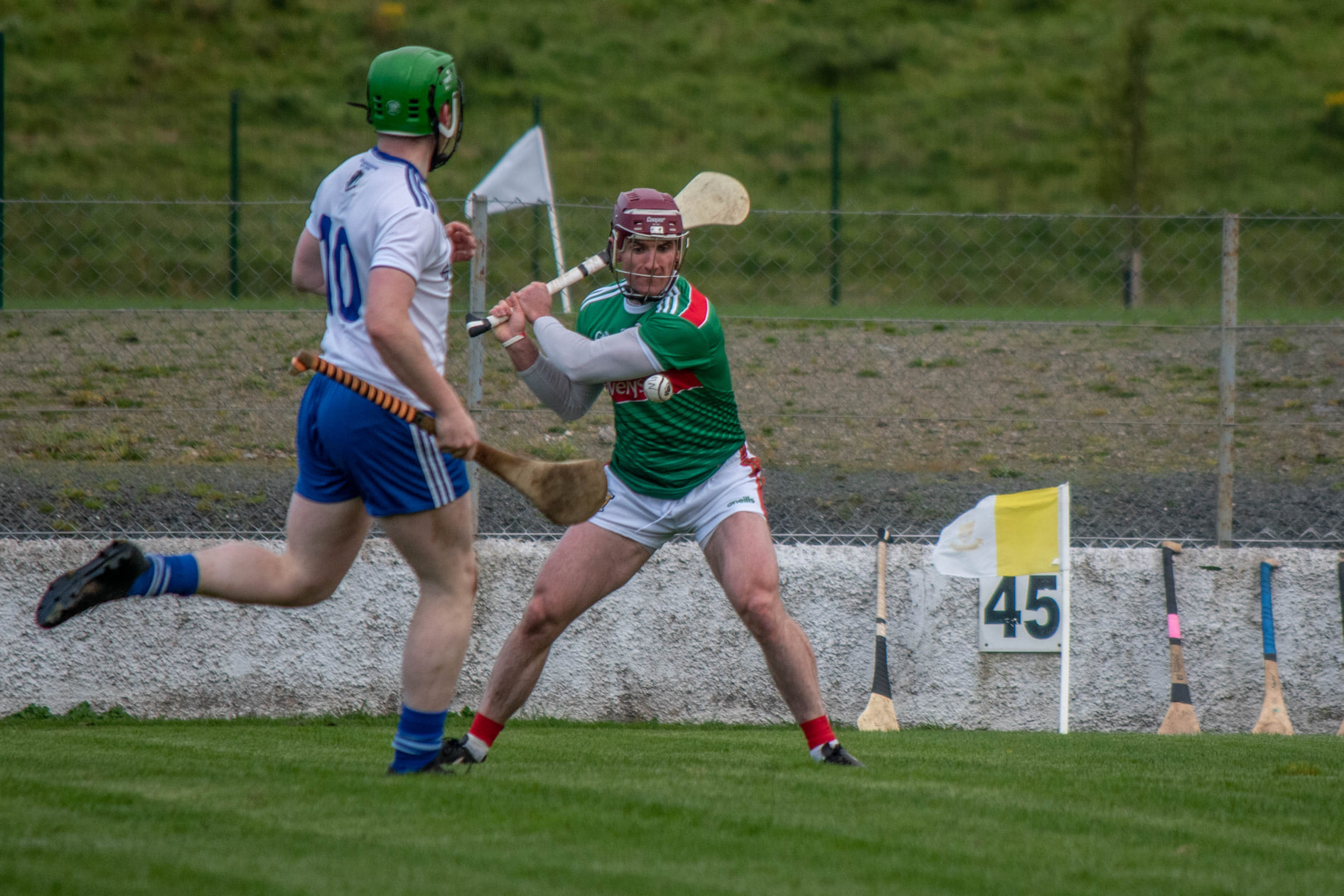 Mayo’s Cathal Freeman takes a strike at goal as Conor Flynn of Monaghan watches on.

Monaghan were battling gamely in their own half-back line but the balls they delivered into the forwards were aimless at best and clueless at worst. Most of the chances they did create were missed – they had ten wides by half-time – and by the time the first-half water break rolled around Mayo had already built up a 0-7 to 0-1 lead, with Boland notching three, Coyne two and both Kenny and Adrian Philips one apiece.

Monaghan hit a mini purple patch after the stoppage with the hard-working Aiden Burns and Fergal Rafter both converting, but points from Huane (who snapped a hurl in the process), Philips and Coyne had Mayo seven clear before the game’s first goal arrived on 26 minutes.

It was a cruel way for Monaghan to concede; Freeman rumbled up the left wing and sent a low shot flashing across the face of goal, and in his attempt to intercept, Monaghan full-back and captain Kevin Crawley could only divert the sliotar to his own net.

Philips and Boland tacked on a point apiece to stretch Mayo’s lead to 12 but Monaghan earned themselves a chink of hope before half-time when Burns brilliantly claimed Rafter’s long delivery and swiveled to finish to the net beyond Kelly, leaving it 1-13 to 1-4 at the break.

Mayo had the wind on their backs after the restart and Freeman decided to take it for an early spin; he landed one massive point within 30 seconds of the throw-in and then saw another long-range effort drop in under the Monaghan crossbar to make it 2-14 to 1-4.

Monaghan had made the unorthodox half-time move of introducing substitute goalkeeper Patrick Collins and switching starting keeper Hugh Byrne to full-forward, where he quickly settled into a feisty personal duel with Stephen Coyne. Byrne won a free for Rafter to convert and Rafter fired another from play before the Farneymen had their second goal, rifled home from the edge of the D by Burns after a nice move involving Rafter and Conor Flynn.

That trimmed the gap back to ten points but from there on out it was all Mayo. Points from Boland, Kenny and Cormac Philips and a goal from Morley, lobbed delicately over the advancing Collins, widened the lead to 15 before the water-break and they continued to rattle off the points at a blistering clip in the final quarter – 13 of them in the last 18-odd minutes, to be precise, as Monaghan’s resistance wilted completely.

It was a performance and a result to underline Mayo’s status as favourites for the Rackard title, but Walsh and his team will know that far stiffer tests await over the next few weeks.