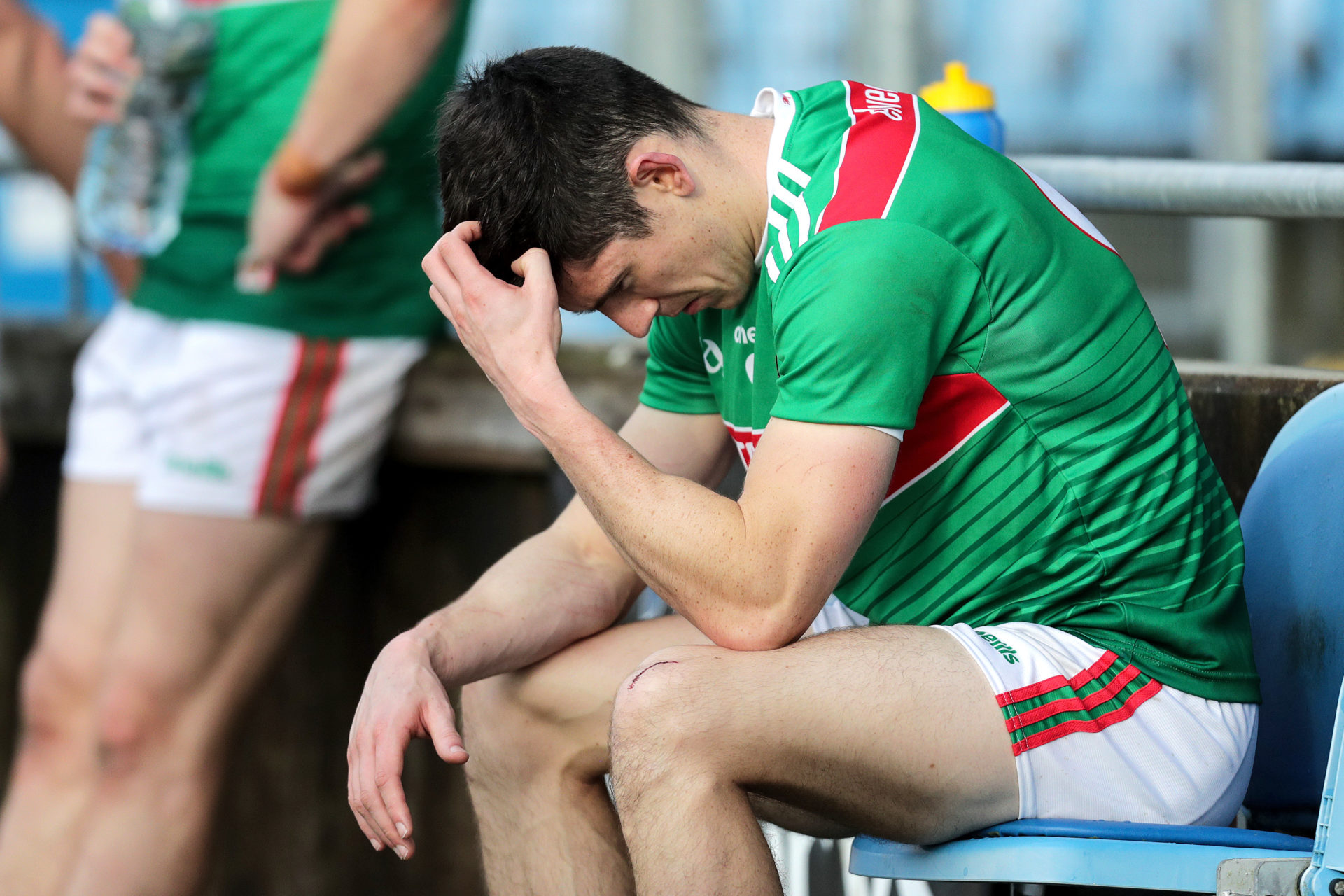 Mayo’s Conor Loftus dejected after their defeat to Tyrone today, which confirmed their relegation from Division 1 of the league. Picture: INPHO/Laszlo Geczo

Mayo have been relegated from Division 1 of the National Football League for the first time in 23 years after losing their Round 7 clash with Tyrone in MacHale Park today.

Mayo trailed by eight points at half-time and despite a spirited second-half revival, ignited by a goal from the excellent Tommy Conroy, the Ulstermen held out to record a one-point, 3-14 to 1-19 victory to make safe their place at the top table at Mayo’s expense.

Mayo played into the teeth of a stiff breeze in the first half and despite a lively start from the home team, with points from Paddy Durcan, Eoghan McLaughlin and Conroy, Tyrone would dominate the second quarter and hold Mayo scoreless for a 15-minute period, in which time Conor McKenna and Dara Canavan both found the net for Mickey Harte’s side. It meant Tyrone led by 2-9 to 0-7 at the interval.

Mayo began the second period brightly with a brace of scores from Darren Coen but a calamitous mix-up in the Mayo defence allowed McKenna to pounce on a short kick-out a fire home a killer third goal for Tyrone.

Mayo battled gamely in their efforts to get back into the game, knowing that only a win would be enough to save their Division 1 status, and Conroy’s well-taken goal allied to points from Mattie Ruane, Diarmuid O’Connor and substitutes Ryan O’Donoghue and James Durcan had them back within striking distance as the game entered it’s closing moments.

But late scores from Darren McCurry and the brilliant McKenna allowed Tyrone to keep their noses in front and Mayo ultimately ran out of time, with the final whistle signaling the end of their record 23-year stay in the top division.

Mayo must quickly put the disappointment of relegation behind them ahead of their Connacht championship quarter-final clash with Leitrim in Carrick-on-Shannon next Sunday afternoon.