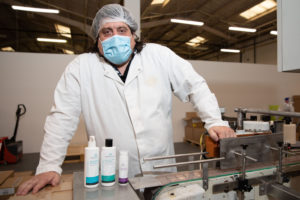 A Claremorris based cosmetics company is offering free hand sanitizer to schools who have been affected by a product recall.

Aiden Corcoran, CEO of Cosmetic Creations, who are based in Claremorris and Cork has announced that as a parent himself, given the ViraPro recall of hand sanitiser, the company will send replacement units of Airmedica, their own brand sanitiser, to all school free of charge.

In a message on social media, Mr Corcoran, a native of Mayo Abbey, said their units are guaranteed Irish with 70 per cent ethanol sanitiser which is HSE approved. If any schools get in touch, the product will also be delivered free of charge.

The Department of Agriculture recalled an approved hand sanitiser, ViraPro, which was widely used in schools across the country. It was removed from the Biocidal Product Register due to possible public health concerns. It is understood the product may contain methanol rather than ethanol.

After the announcement, the Department of Education said schools who used the sanitizer could close today (Friday) if they choose. The announcement was made on Thursday evening.

Cosmetic Creations created their own hand sanitiser, Airmedica, in March in response to the spread of coronavirus.