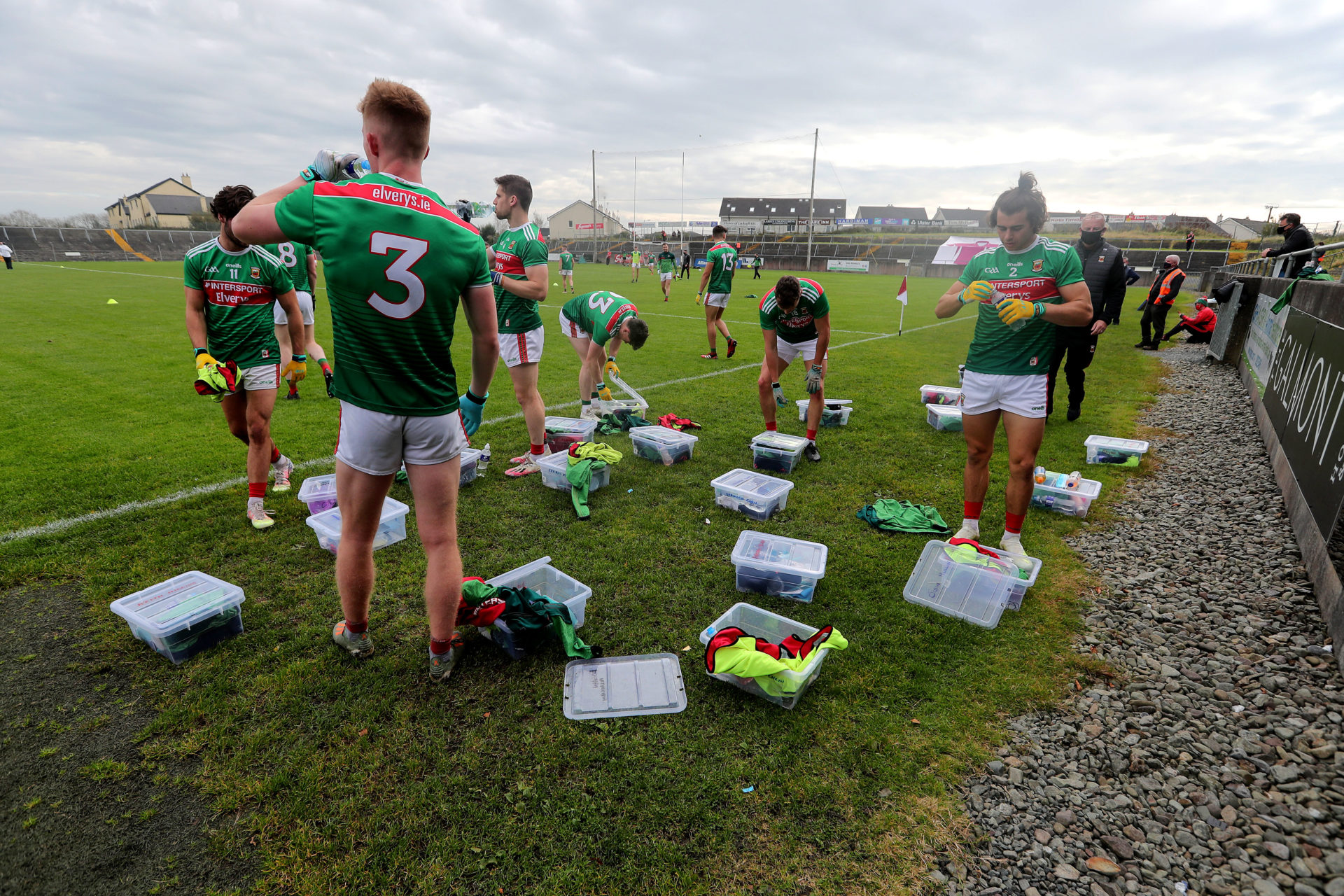 Mayo players take on water from their individual gear packs before the start of the clash with Galway on Sunday, one of the many Covid-19 safety protocols in place. Pictures: INPHO/Bryan Keane

Mayo’s first inter-county game of the Covid-19 era was a TV spectacle for the ages, akin to the Moon Landing, the funeral of Lady Diana and Ali vs Foreman, but effortlessly combining the extraordinary, the tragedy and drama of all three events.

Perhaps such high praise of the event would not be warranted if Mayo had lost, but it was a truly historical game with a victory for the away side in such strong fashion making it all the more memorable.

With the greatest respect to the commentators on TG4, most of the knowledge of Gaeilge these ears absorbed during the glory days of Honours Irish have gone “amach an fhuinneog” as the years have rolled by since a rigorously-mustered effort culminated in a C2 grade worthy of a starring role on the fridge.

Temporarily, the sights and sounds of this viewing gallery became the best of both worlds, combining TG4’s coverage backed by the mellifluous commentary of Michael D McAndrew with the inimitable Martin Carney riding shotgun on Midwest Radio. The two streams rarely synced up, however, and something had to give, forcing the radio to return to its mantlepiece on the back kitchen window. Apologies to Michael D and Martin.

The sports world is au fait with “behind closed doors” affairs, with the Premier League most notably operating on that basis for several months now. Sky Sports and other broadcast companies pump in fake crowd noise, which is a mild comfort at best and comes across disingenuous at worst, like a comedy show with a laugh track telling you where and when to direct your fits of hooting and howling.

When Mayo win a free from that sort of range, you chalk it down and rarely have to scratch it off, such is Cillian’s status as an elite free-taker in the world of Gaelic Games. You chalk it down as a free for the Ballintubber man, and then, here comes the roar of the Mayo faithful.

But pump the brakes. No roar? That was the moment the bizarro-world reality of this game became abundantly clear.

The Irish language commentator roared onwards, with only the occasional word landing in the sitting room (liathróid being the most prominent) while under his speech came scatterings of sound from the players. While the game was being played at a quiet tempo, the noise was like that of an overcrowded supermarket at Christmas time, with a level of festivity to it. At a greater pace, it was chaotic and frantic like a Saturday evening mass that had dwindled on far too long starting to file out.

Shouts such as “Yeah, Oisin!” and “Paddy, Paddy, PADDY” were commonplace, with colourful language kept to a surprising and muted minimum, although the expletives were surely spilling out in TV rooms all over Galway.

You would have to feel some form of empathy for the cameramen working the sidelines at this game. These hard-working folks can always rely on a dependable Mayo supporter with green and red face paint roaring with ecstasy during the big moments, such as Mark Moran’s goal or Paddy Durcan’s equally brilliant effort. Or a crying child, clad in maroon, which of course only the most malevolent of Mayo supporters would relish seeing but it is in those moments lie the raw emotion that we all associate with watching sport.

Even the matchday commentators would probably feel robbed of having the chance to say, “and now the Galway supporters are headed straight to the exits” in their language of choice, after Conor Loftus lashed in the third goal, their words synchronized perfectly with the sea of jerseys making their way out the gate at Tuam Stadium. Instead, most of the coverage away from the field of play focused on managers and subbed players, including Galway’s Damien Comer, who looked as if he wanted to be anywhere but the spotlight after going off injured in the opening minutes.

It is a shame Mayo supporters did not get to witness first-hand the destruction wrought upon an old enemy on Sunday. The team played with a confidence and a swagger perhaps best personified by Aidan O’Shea’s wild potshot from the least likely of angles, that cannoned off the post, just before the half-time whistle.

A word must be reserved for the fun had on social media, most notably Twitter, throughout the game. The thing about GAA supporters is that if we can’t have the craic in the pub or in the stadium, we’ll find a way to express the joy the game brings.

“Ye can keep Jim McGuinness lads, we’ve got something better,” said Cormac O’Malley on Twitter, gesturing to a picture of Mayo coach Ciaran McDonald, while others gushed over the performance of Mayo’s latest dual star Mark Moran; his talents are now as visible in inter-county football as they are on TikTok, the viral video social networking service where it emerged, after his howitzer of a second point, that Moran has amassed some 18,000 followers. 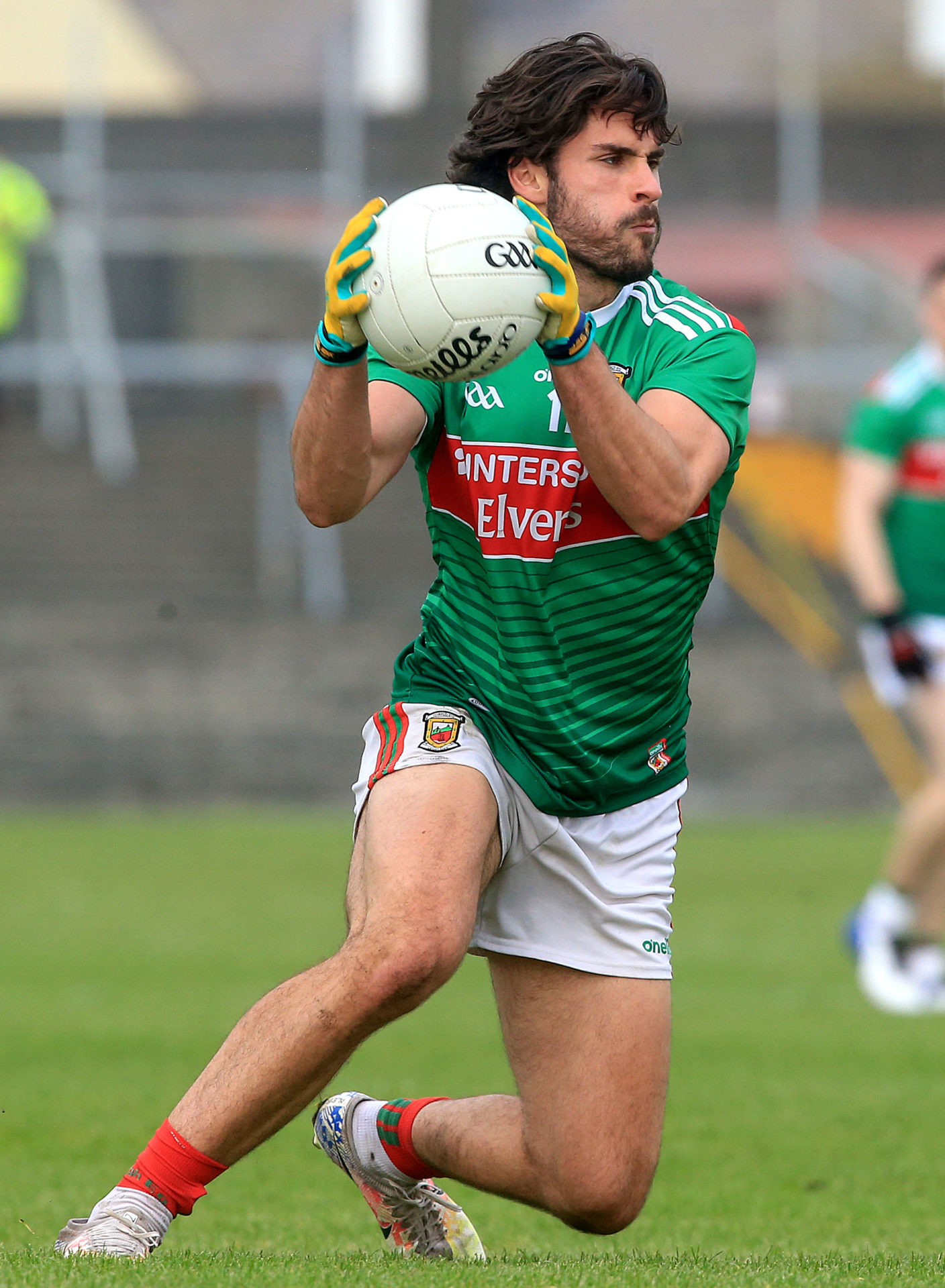 Mayo debutante and Man of the Match Mark Moran.

The phone was hopping too, with friends from both sides of the Mayo/Galway border and further afield popping up with their thoughts on proceedings in group chats and what have you. “Oisin Mullin is playing a blinder”, “who is this Mark Moran fella?” “Galway picked a shocking team”, “Strange to hear what the players are saying to each other sometimes”, “who is this Mark Moran fella?”, “Aidan fairly leapt over your man” and so on.

Another text flashed in from a mate near full-time, echoing a sentiment no-one has dared to speak aloud for weeks now. “Sure wouldn’t it be just like Mayo to win their first All-Ireland in donkey’s years the one year we can’t go and watch them.”

If it turns out the heartbreak of the past 69 years was down to a major case of stage fright, you’d take an empty Croke Park and the Gaeilgeoir on match-day commentary if it meant that Mayo landed the big one.