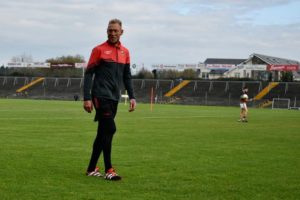 Mayo put in an outstanding performance to beat Galway this afternoon on their long-waited return to action in Allianz National Football League. The result leaves Mayo slightly closer to remaining in Division One but they are relying on Donegal to win against Tyrone later today. They will then also need to beat Tyrone next weekend to retain their status.

There was reason for concern as Galway made a late change, revealing that star forward Damien Comer would be part of the starting 15. However, the Annaghdown man was hauled off after just three minutes through injury. Mayo proceeded to produce one of their most dominant first-half displays in recent memory, putting up an impressive 2-17 against the Tribesmen in the opening 35.

Debutant Mark Moran grabbed the headlines in the opening quarter, scoring two exceptional points from play and burying the first goal of the game. The Westport man was played in thanks to a beautiful pass from Cillian O’Connor, who himself had an impressive half with eight points to his name. Moran left Galway captain Johnny Heaney flummoxed with quick movement and hit a low shot into the net beyond Conor Gleeson.

.@MayoGAA's Mark Moran positions himself perfectly and finds the back of the net! pic.twitter.com/1GKegnqXJc

The second goal came courtesy of Paddy Durcan. The Castlebar Mitchels man got on the end of a brilliant passing move orchestrated by Oisin Mullin that left the Galway defence reeling.

Mayo played far more conservatively in the second half, with most of the heavy lifting done but they were still able to hurt Galway with their attacking play. Conor Loftus buried their third goal with a well-driven shot.

The margin of the victory by full time was by a resounding 15 points, with referee Maurice Deegan blowing the game up with two minutes of added time remaining. 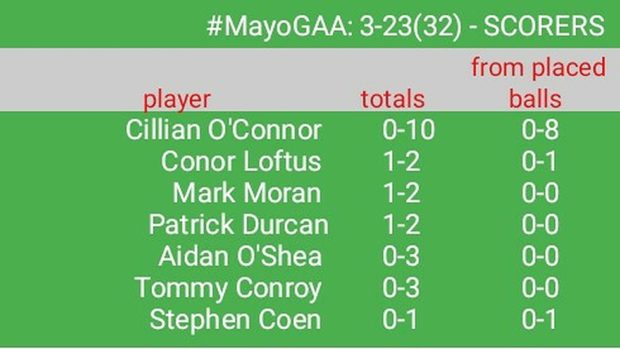 See Tuesday’s edition of the Western People for comprehensive reports, reaction and analysis from Mayo’s victory over Galway