Shades of ’97: What goes around comes around for Mayo 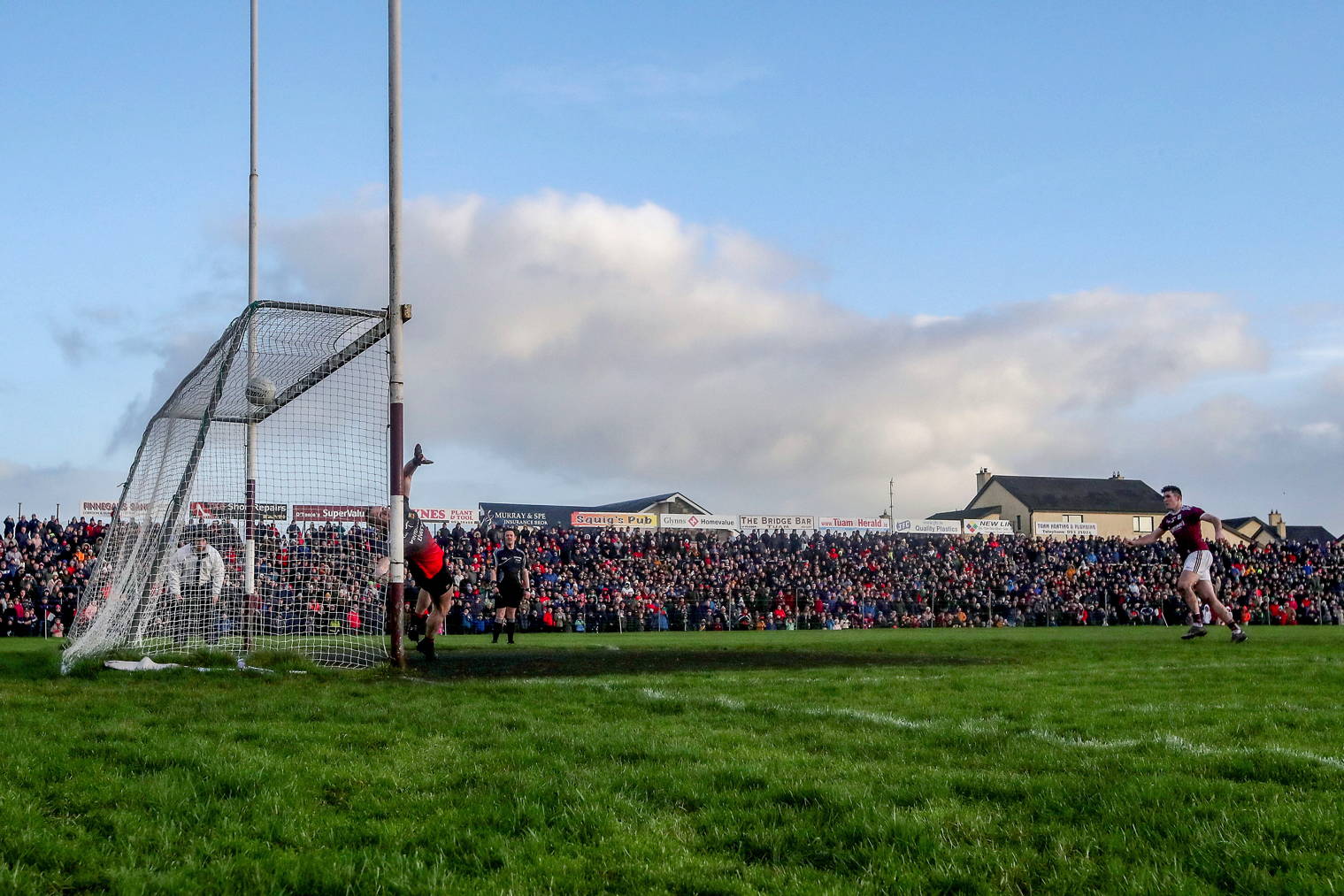 Mayo’s Rob Hennelly is unable to stop Barry McHugh of Galway scoring a penalty during the 2019 FBD League clash between the teams at Tuam Stadium. The stand and the terraces will be empty this Sunday. Picture: INPHO/Bryan Keane

Bertie Ahern had yet to become Taoiseach, Mary McAleese had yet to become President and Oisin Mullin had yet to be born. That’s how long it is since Mayo played outside Division 1 of the National Football League.
Having emerged from the shadows to come within a whisker of winning the 1996 All-Ireland SFC final, Mayo recoiled somewhat to lose to Laois, Louth and Clare in the following season’s league campaign. It left them having to visit Tuam Stadium to play a game where victory was imperative if they were to avoid relegation. Sound familiar?
Current boss James Horan scored a point and selector Ciaran McDonald two, as Mayo struggled to an unspectacular yet priceless 0-7 to 0-4 revenge win against Clare in a Relegation Playoff, which prevented the demotion of John Maughan’s team to Division 3. A rejigging of the league structure later that year saw Mayo placed in Division 1 – or Section A as it was known then – and there they have stayed since.
A victory in Tuam Stadium next Sunday won’t guarantee that they’ll still be Division 1 in 2021 but a defeat will guarantee they won’t. That’s how precarious the situation is for Mayo heading into the final two rounds of the 2020 campaign, against Galway and Tyrone.
Making life even more difficult for the Green and Red is that both opponents still have much to play for themselves; Galway are chasing the title, Tyrone, technically, could still win it, and yet they could also be relegated if Mayo happen to survive.
Andy Moran describes as “amazing”, the circumstances of the game that is about to take place behind the closed gates of St Jarlath’s Stadium. And yet despite the high stakes involved between Mayo and Galway, the legendary Mayo attacker, who retired from inter-county football twelve months ago, believes there’s something more important to be gained from a Mayo perspective than the result.
“This is an amazing game, a one-off, and if I’m being honest, as a Mayo supporter I’m not too concerned about the result. Of course we’d love to stay in Division 1 and keep a status that we’re very proud of – we’re National League champions – but if we’re looking at the championship, the result isn’t the biggest thing. The biggest thing is the performance. We need to go to Tuam and put in a performance. If that has us winning by three or four points, that’s brilliant. If we lose by three or four points and we play really, really well, and we can see some bright light and think that with a change here or there we’ve a chance of beating Leitrim, Roscommon and Galway in the Connacht championship, I’d take that all day long. 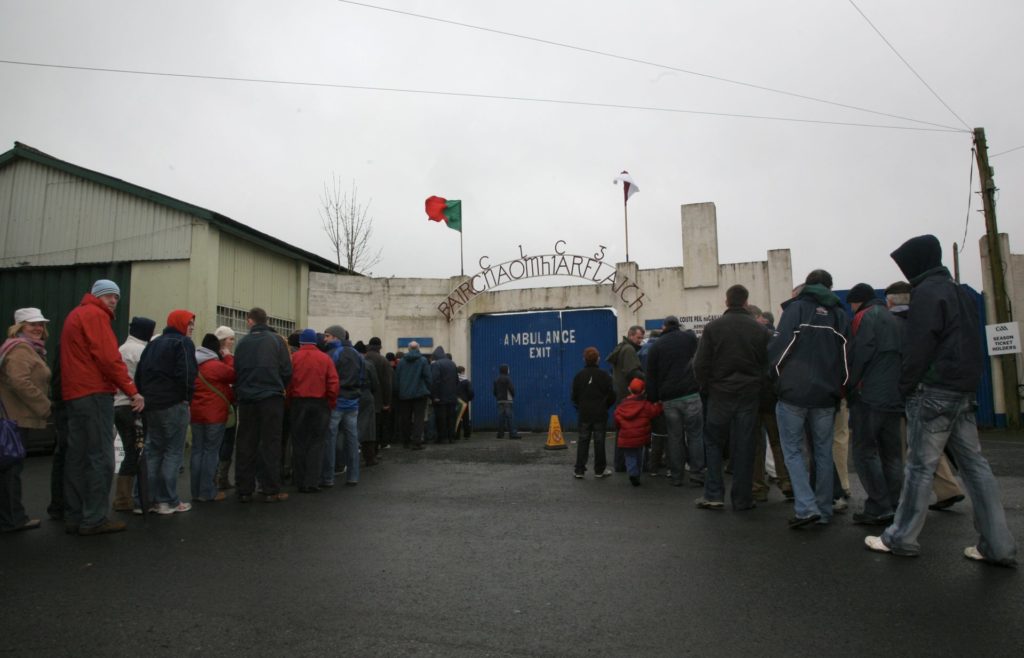 There’ll be no queues of supporters entering Tuam Stadium at the weekend as government restrictions mean permitted sporting fixtures must be played behind closed doors. Picture: INPHO/Mike Shaughnessy

“We need to be realistic at what we’re looking at here but I know James (Horan) is prepping for a really big performance and hopefully we get it,” remarks Moran.
Sunday’s match is the first of a possible five in five weeks for Mayo, given that the Connacht championship will be run off on consecutive weekends, beginning the week after the final round of the National Football League. Andy Moran reckons any player would relish that sort of schedule; of playing a game, then trying to fix things at training midweek, talking things through and putting all that work into practice the following weekend.
But what makes the upcoming winter season so different is that while it may feel like the start of a brand new campaign (seven months have passed since the last inter-county games), there can be no bedding in period for Mayo. Their first game is as big as the fifth in many ways, which poses the question: Does James Horan stick or twist? Is there any window of opportunity to experiment with players who rose to the fore during the excellent Mayo Club Championship or is the safe option also the wise one: to stick with the tried and trusted?
Moran says he had this exact conversation with former Mayo teammate Liam O’Malley at the end of which neither were any the wiser.
“We couldn’t answer the question. Neither of us was certain what the right thing to do is.
“If you look at our last game against Kerry, we were so poor in the first half yet put in a brilliant performance in the second half. I remember Aidan (O’Shea) taking the game by the scruff of the neck, Keith had the chance to equalise, we were really, really good. 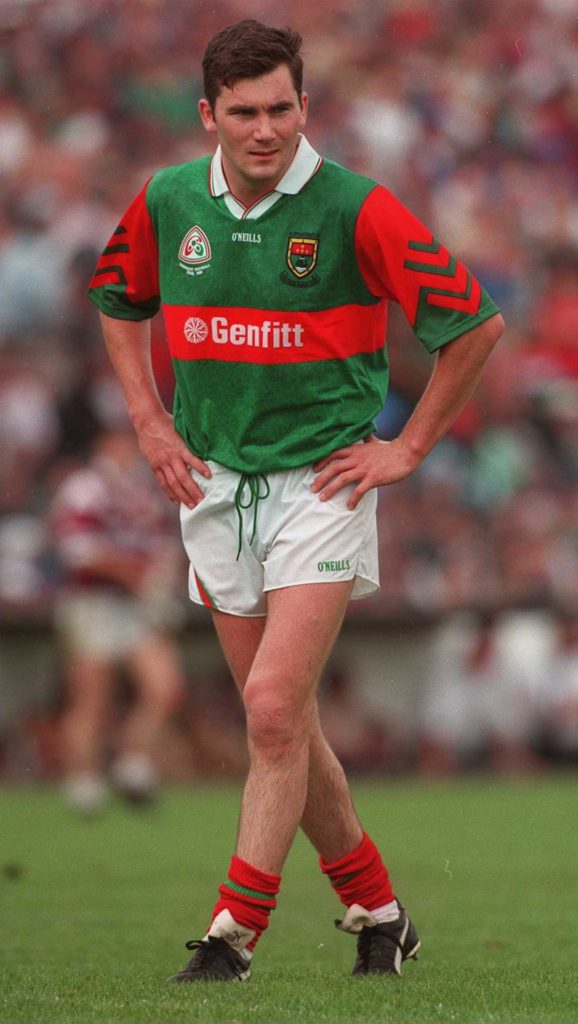 “I think it’s probably going to have to be a mix of both. I think the likes of Oisin Mullin will play so that gives us some youth on the full-back line. You’ve Paddy Durcan on the half-back line and he’s only coming into his prime. The midfield is going to be Mattie Ruane plus one so you’ve youth there too. And then you’ve Ryan O’Donoghue who’s probably going to start up front, or James Carr. So you’ve two young guys there as well. Throw in Aidan and Lee and a couple of guys around that and then all of a sudden you’ve a nice team so if we can pull it all together, if we can get our system right and the balance of the team right, I think we’ve got a really good chance.”
But a chance at what exactly? Avoiding relegation? Reaching a Connacht final? Of lifting the Nestor Cup for the first time since 2015? Of contesting an All-Ireland final, like Mayo did in 1997 after that Relegation Playoff in Tuam? Or, dare we say it, even lifting Sam? The fact there are so many unknowns with every county is adding to the intrigue of this Covid-enforced winter season, so too that there is no form and so few reference points on which to base any hard predictions.
“It’s so difficult,” stresses Moran, who was part of Michael Solan’s Mayo U20 management team this year. “In one way you’d love it and in another way, James (Horan) and every other manager in the country have such difficult decisions to make and you wouldn’t envy them at all.”