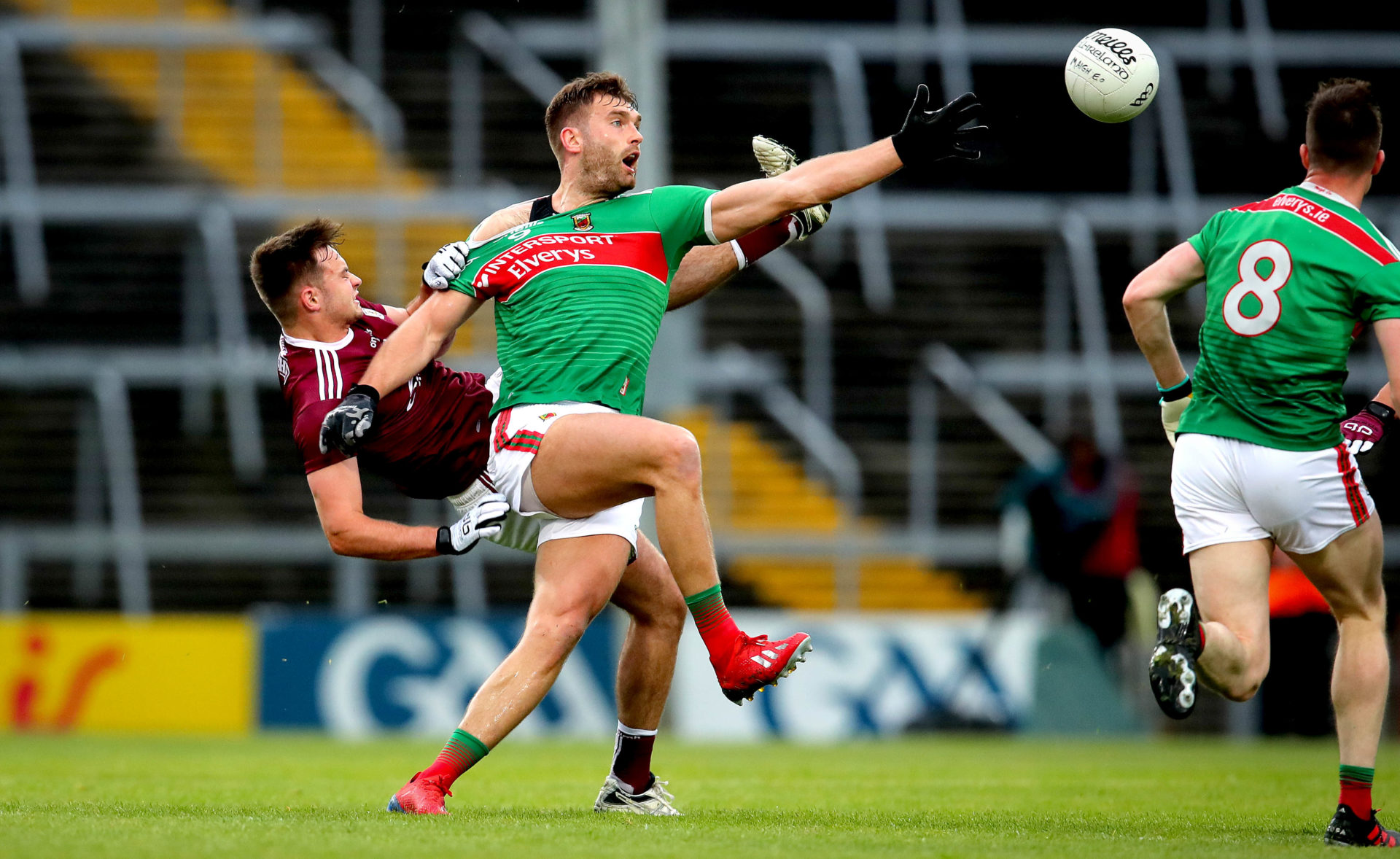 Galway’s Cillian McDaid and Mayo’s Aidan O’Shea battle for possession during the All-Ireland Round 4 qualifier between the counties in Limerick last summer. The two players will line out for their respective counties again today. Picture: INPHO/Ryan Byrne

It looked at certain points over the last few days like the fixture may not proceed at all, given the trajectory of Covid case numbers and the lingering prospect of a second full-on lockdown, but the show goes on; Mayo will play their first competitive inter-county match since the first day of March in Tuam Stadium later on today (Sunday) as they take on old rivals Galway with survial in the top tier of the league on the line.

First off, a quick recap of the permutations. It’s not quite accurate to say that Mayo will be immediately relegated from Division 1 if they lose today. A defeat would mean they could finish on a maximum of five points in the table, still technically enough to pull level with Donegal, provided Donegal lose at home to Tyrone later in the day and also lose their Round 7 clash away to Kerry next Saturday. Were that to happen, then a win over Tyrone in Castlebar Round 7 would leave Mayo level on points with Donegal in the final standings, and with the head-to-head rule not applicable after their Round 1 draw, scoring difference would be used to decide who stays up. But with Mayo currently on a scoring difference of minus-15 and Donegal on plus-18, it would take a drastic swing over the course of the two rounds.

Which is a roundabout way of saying that if Mayo were to lose in Tuam today, they would almost certainly go down, losing the Division 1 status they have held since 1997, the longest top-flight residency of any team in the country. As bizarre as it might feel for the first game back after over seven months away, this is absolutely a must-win match for Mayo, at least insofar as their Division 1 standing is concerned.

Even were they to win, it should be noted, Mayo will still be a precarious spot ahead of the visit of Tyrone next week. The results of a number of other matches would come into the equation, most significantly Donegal v Tyrone later in the day but also Kerry-Donegal on Saturday week and Monaghan-Meath on Sunday week.

James Horan named his team on Friday night and handed senior debuts to two players, Ballaghaderreen defender David McBrien and Westport forward Mark Moran. Moran is one of four Westport players named on the starting 15, alongside Lee Keegan, Fionn McDonagh (making his first appearance for the county since last year’s All-Ireland semi-final loss to Dublin) and Eoghan McLaughlin. Newly crowned county champions Knockmore have no representation on the named starting 15, though it is very possible that Horan will make changes before throw-in.

David Clarke has been given the nod ahead of Robbie Hennelly in goals while the backline features the experience of Keegan, Stephen Coen and Paddy Durcan alongside the newcomers McBrien, McLaughlin and Oisin Mullin, the Kilmaine man having been given the chance to continue his fine pre-lockdown form at corner-back. His presence beside McBrien means two of Mayo’s full-back line are under-20 players.

Mattie Ruane starts at midfield alongside the slightly surprising choice of Conor Loftus. Loftus played in the middle of the park for Crossmolina during their intermediate championship campaign but it will be his first time starting at midfield for the county, for whom he has generally been deployed at half-forward. 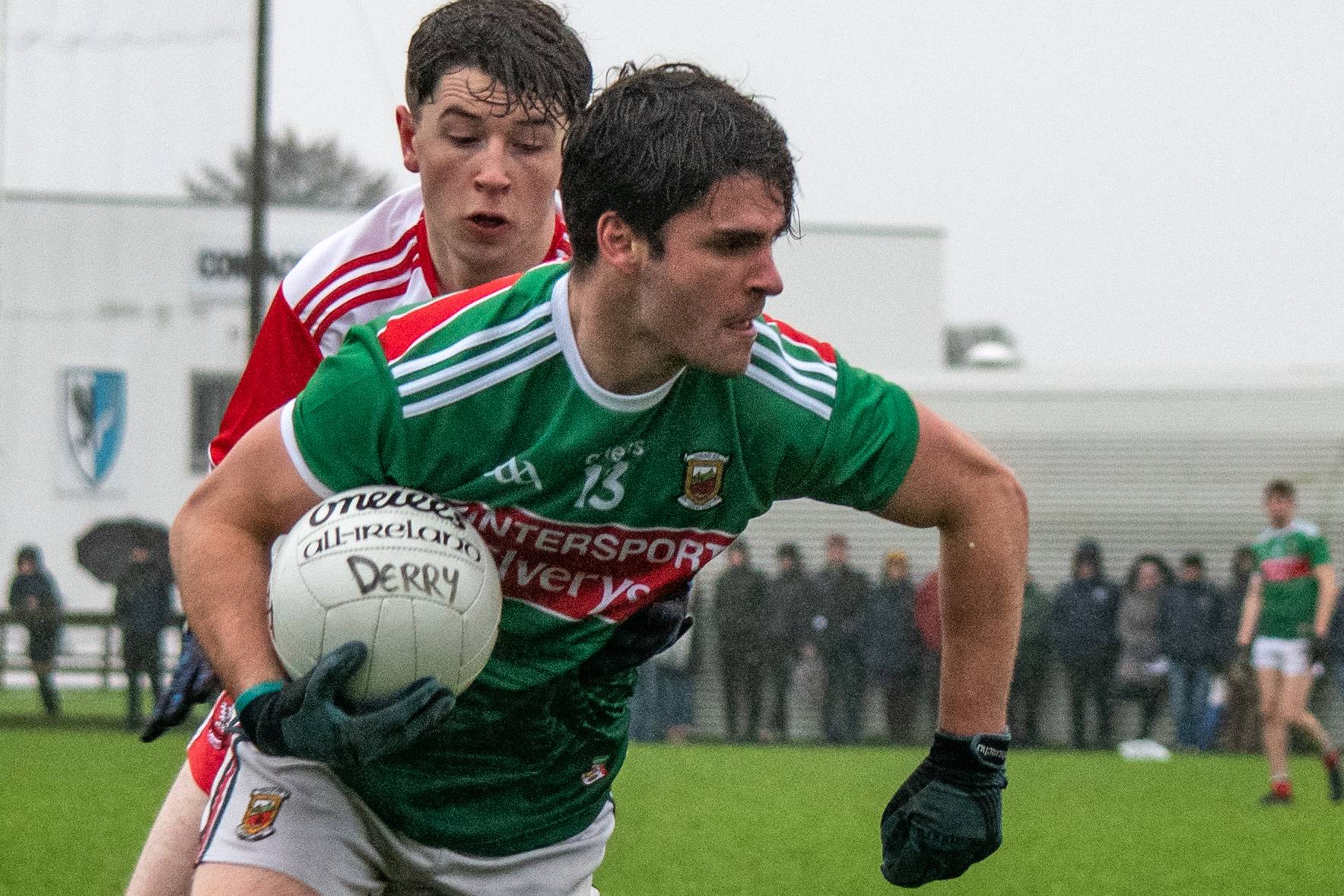 Mark Moran will make his Mayo senior debut at centre-forward against Galway in Tuam Stadium today.

Moran will have the chance to showcase his talents from the number 11 jersey, flanked on either side by the hard-running McDonagh and Diarmuid O’Connor. Cillian O’Connor (making his 90th appearance in league and championship for Mayo) is named in one corner and Tommy Conroy of the Neale, another of the young players to impress for Mayo in the early stages of the league, is picked in the other. Aidan O’Shea, who will captain the team, has been named at full-forward but will likely split his time between the edge of the square and midfield.

It’s a team with a relatively even blend of youth and experience and suggests that Horan has at least half an eye on preparing his panel for the Connacht championship, which begins against Leitrim in just two weeks. Andy Moran, speaking this week, suggested that Mayo maintaining their Division 1 status should not be viewed as the primary goal, despite their record of the longest unbroken stay in the top flight stretching back to 1997.

“If we’re looking at the championship, the result isn’t the biggest thing. The biggest thing is the performance. We need to go to Tuam and put in a performance,” said Moran. “If that has us winning by three or four points, that’s brilliant. If we lose by three or four points and we play really, really well, and we can see some bright light and think that with a change here or there we’ve a chance of beating Leitrim, Roscommon and Galway in the Connacht championship, I’d take that all day long.”

Assuming the restart goes as the GAA are planning, Mayo could potentially be playing five do-or-die games over five consecutive weekends, beginning with Galway and Tyrone in the league, carrying through to the Connacht championship opener against Leitrim on November 1 and a potential semi-final against Roscommon and final against Galway, on November 15.

From Galway’s point of view, The Tribes will see today’s clash as the perfect chance to all but relegate their old rivals while taking a major step toward claiming the league title for the first time since 1981 in the process. The new format means there will be no league finals this year and the team left top of the standings at the end of the regular season will be declared champions.

Padraic Joyce has been forced to leave out a number of his Moycullen players after an outbreak of Covid-19 in the squad of the newly-crowned Galway senior champions. The influential Shane Walsh is also absent through injury, but there are first league starts for Claregalway’s Conor Campbell, Salthill-Knocknacarra’s John Maher and Corofin’s Jason Leonard. Robbie Finnerty, the son of former Mayo player Anthony Finnerty, will line out at corner-forward.