There’s a festive treat in store for Mayo movie fans with confirmation this week that the locally-shot “Wild Mountain Thyme” movie starring Jamie Dornan and Emily Blunt is to be released before Christmas. 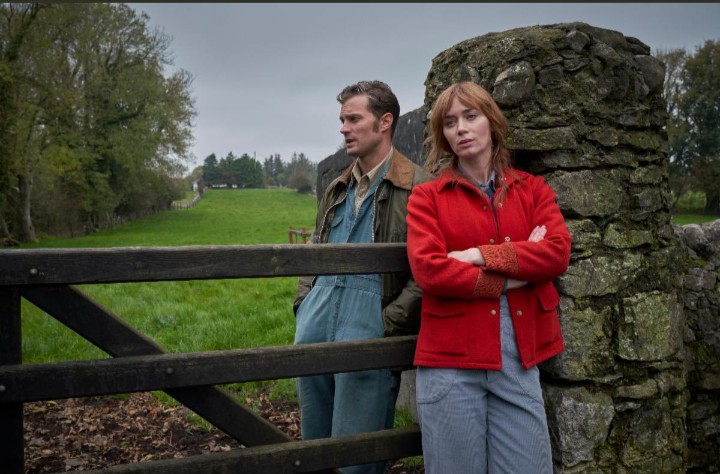 Jamie Dornan and Emily Blunt star in “Wild Mountain Thyme” which is due to be released this December.

American film distribution company Bleecker Street confirmed in a Tweet this week that the production, which also stars Jon Hamm, Christopher Walken and Dearbhla Molloy, will be released in theatres and on demand in just eight weeks’ time on Friday, December 11 next.

The film was directed by the Oscar-winning John Patrick Shanley and is based on his Tony Award- winning Broadway stage play, “Outside Mullingar”.

Much of the movie was filmed on location in the Crossmolina area of north Mayo throughout October and November of 2019 and many locals were featured as extras in the production.

Described as a lyrical romance, “Wild Mountain Thyme” tells the story of obstinate star-crossed lovers Anthony (Dornan) and Rosemary (Blunt), whose families are caught up in a feud over a hotly contested patch of land that separates their two farms.

Dornan and Blunt have attested to how they were each bewitched by Shanley’s script for the film which Blunt described in a recent interview as “the most beautiful, eccentric, strange poem of a film”.

Despite not yet having been released, “Wild Mountain Thyme” is already being mentioned in predictions for the 2021 Oscars.