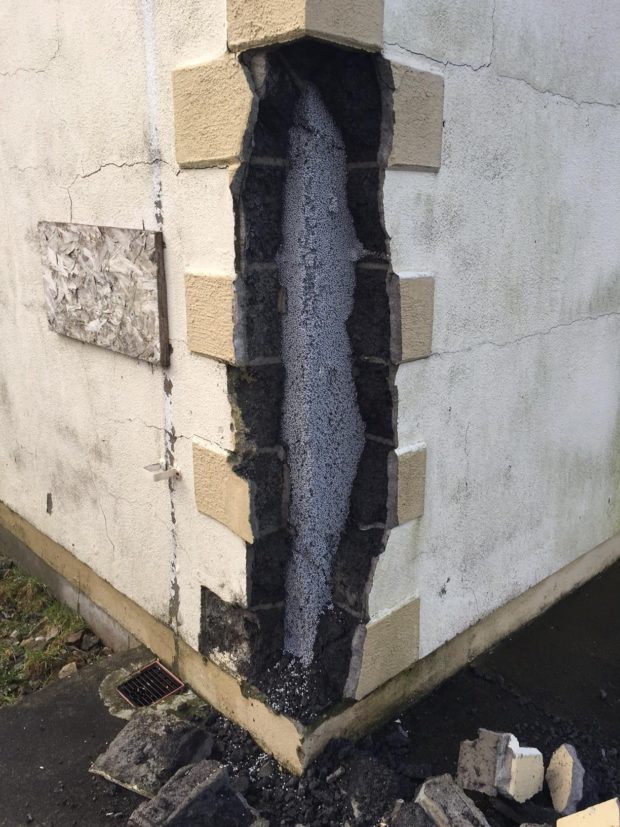 This house in North Mayo has been devastated by pyrite and is literally falling to pieces.

Erris homeowners who have seen their homes ravaged by pyrite have been left frustrated by ‘red tape’ associated with the Defective Concrete Block Grant Scheme.

Michael Healy has seen his Corclough West home decimated by pyrite. While he welcomes the long-awaited arrival of the scheme, he said it is frustrating that homeowners who have already endured tremendous hardship have to jump through further hoops.

Mr Healy paid a €5,000 deposit to enable testing to take place on his property. This money will be refunded when the tests come back positive but the €7,000 he previously shelled out himself will not be reimbursed.

One test has been returned on Mr Healy’s home which indicates the severity of the problem with more to follow.

“There are people who just don’t have €5,000 like that and having to re-apply for planning is the biggest joke of all time. That’s just a money-spinner. It’s a real sticking point for people,” said Mr Healy.

When all the tests are returned and show the presence of pyrite then Mr Healy and others like him can apply for the grant. Mr Healy’s home has been effectively split in two with certain sections inhabitable. He believes his house will require a full demolition.

The maximum grant available under the defective concrete blocks scheme is €275,000, or 90% of the cost of the works. An estimated 350 Mayo homes, primarily in North Mayo, have been affected. Mr Healy believes the roll-out of the grant will see many more homeowners come forward.

“It’s going to be like this virus —there will be more cases every week.”