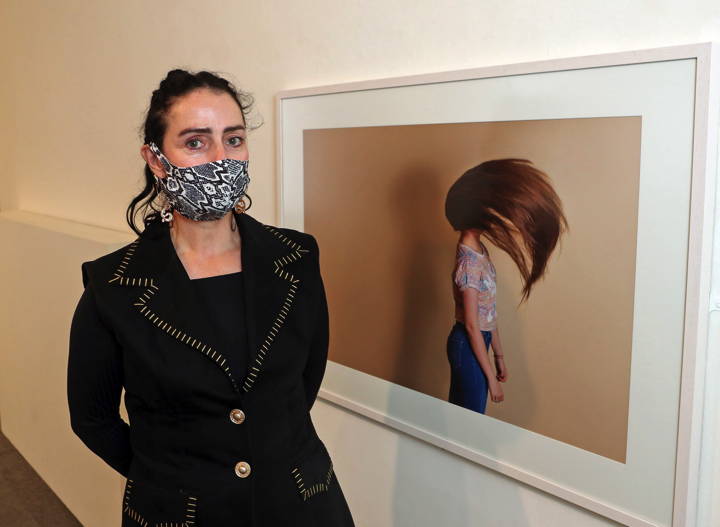 Artist Breda Mayock in the Linenhall Arts Centre at the opening of her ‘Crown lakeen’ exhibition, with portraits by photographer Orla Sloyan. Picture: Michael Donnelly

Two unique photographic exhibitions exploring hair as a powerful symbol of culture and identity are being launched this week at the Linenhall Arts Centre, Castlebar, and the National Museum of Ireland-Country Life, Turlough Park, Castlebar.

The exhibitions are part of a fascinating Mayo arts project entitled ‘Crown – Hair and Identity’ which focuses on Traveller/Mincéiri women and girls and the subject of how hair is intrinsically linked to identity, ethnicity, culture and gender.

The exhibition at the Linenhall Arts Centre, entitled ‘Crown lakeen’ explores hair and identity from the perspective of the teenage girls who participated in the project.

The exhibition at the National Museum of Ireland-Country Life is entitled ‘Crown beoir’ and has opened in the Courtyard Gallery. It features the women participants and considers the same themes but brings more life experience to the subject matter.

‘Crown — Hair and Identity’ was originated by Breda Mayock who worked with Traveller women and girls in the Maple Youth Centre, Ballinrobe, and Mayo Traveller Support Group. She worked with photographer Orla Sloyan to photograph the women with a special emphasis placed on their hair.

“In almost all societies, hair is a strong form of self-expression. Exploring hair rituals and practises in minority cultures is particularly compelling because hair often communicates an unspoken expression of identity,” said Ms Mayock.