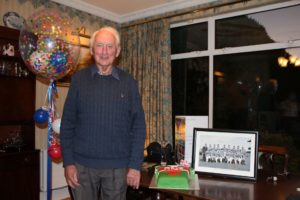 Frank Fleming was originally from Kilcolman in the South Mayo town. He joined the Mayo senior football team panel just weeks after Mayo claimed their last All-Ireland title in 1951.

He replaced Joe Staunton who played on the winning team at half-back and continued a six-year term with the senior outfit from 1952 to 1958.

Frank had been working in Dublin at the time and playing with the Westerns GAA club having transferred from Claremorris after he completed his education at St Jarlath’s College, Tuam. He travelled from Dublin regularly in the 1950s to take part in training and matches with the Mayo team.

Frank has been a leading light in the Mayo Association Dublin and is now their Honorary Life President. Through this, Frank has raised much-needed funds for Western Care, Cheshire Homes and many other charities throughout the county.

Living in Clontarf, Dublin for the past 65 years, he set up Champion Fire Defence in 1969 with former Armagh GAA player, Jimmy Whelan, which became the largest Fire Protection company in Ireland.

He married Kay Kilkelly, who is now in her 89th year and who is originally from Aghamore and the couple celebrated their 60th wedding anniversary last June. They have five children, Marie, Gabriel, David, Neil and Orla, and seven grandchildren.

Family and friends had planned a big celebration for Frank’s 90th to be held in Westport this month but their efforts were curtailed due to Covid-19 restrictions.

Instead, guided by his grand-daughter, Alex, family members put a video compilation together with relatives and friends expressing their joy at him reaching this great milestone.

The family also got Michael Ring TD and singer Tommy Fleming to join in the video celebrations while former Taoiseach, Enda Kenny also phoned Frank on his birthday.

Frank is wished a very happy birthday and every good wish for health and happiness into the future.