Gorillas in the mist, Mary Poppins and bloodied knuckles: By God, you’d miss the championship already 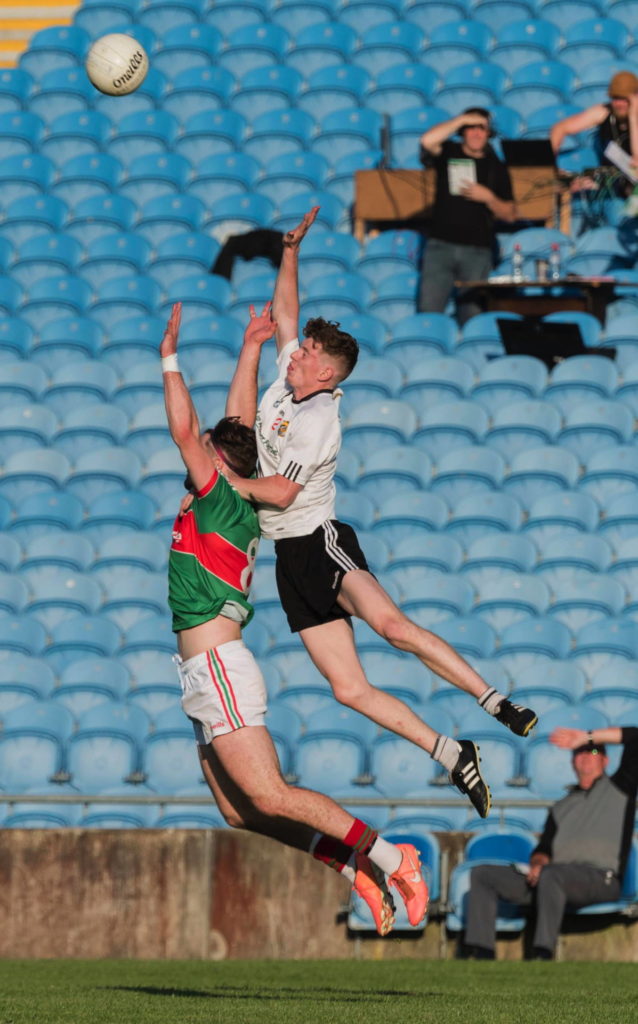 High flying action from the meeting of Kilmaine and Kilmeena in this year’s Mayo JFC Final in MacHale Park, Castlebar. Picture: Martin McIntyre

It’s down on record that the first-ever game in the history of Balla GAA Club, played in the mid-1880s, was one that saw them take on the neighbours from just up the road Breaffy. What odds the two clubs will be pitted against one another when the draw for the 2021 Mayo SFC is held? A lot shorter than they were prior to last month’s county intermediate final, that’s for sure.
Balla were hardly given a prayer of beating Kiltimagh yet two years after playing junior football, the club has, for the past three weeks, been acclimatising to the soothing reality that for the first time since the 1990s it is returning to the highest tier of Mayo football. It’s a far cry from losing a Division 6 (or 1F as it was called) final – ironically, to Breaffy‘s ‘B’ team – only 10 years ago.
It’s difficult to imagine just how stuck this must all sit in the throat of Kiltimagh folk, especially when you consider that up until this season, Balla, their next-door neighbours, had never even lifted the intermediate trophy and that despite losing four finals since 2007, Kiltimagh remain the most successful club in the history of the competition.
The way Kiltimagh had made shreds of outright favourites Hollymount-Carramore and the traditional senior powerhouse that is Crossmolina Deel Rovers in the previous two rounds, seemed to carry an assurance that this was the year where the men from East Mayo were going to regain their seat among the county’s elite clubs. It turned out they had only made what Mary Poppins coined a pie crust promise. “Easily made, easily broken.” In a macabre sort of way, it’ll be fascinating to see what response is forthcoming from the Gilmartin Park side next season; they may have believed in the theory that the longer you keep knocking the sooner the door will open but all they have to show for three finals in five seasons is bloodied knuckles. Tourmakeady appeared in three intermediate finals in five years and unlike Kiltimagh, even won two of them, in 2006 and 2010, yet by 2017 they had been relegated to the junior championship where this year they were unable to even qualify from their group.
The same fate, of course, does not have to befall Kiltimagh and they could, for example, choose to travel the Ardnaree path, one that saw the Moysiders, rather infamously, lose four junior finals in five years, from 2009 to 2013, before finally they broke through the ceiling in 2015. But no more than Kiltimagh being the club to have won more intermediate championships than any other in the county with five to their name, they have actually won more juniors. Their six wins at that grade is second only to Crossmolina (yes, Crossmolina!), so it’s a level to which the club in times past has not been unfamiliar. In fact, their last junior title is as recent as 2009 when they actually served Ardnaree the first of those four final defeats. But with still a relatively young age profile, it’s in the players’ own hands which direction they wish to travel from here.
Speaking of travel, back in June, when the first real easing of lockdown restrictions had allowed for movement to anywhere within the county, I took a spin to Croagh Patrick. Never had something done so often felt like such a novelty. 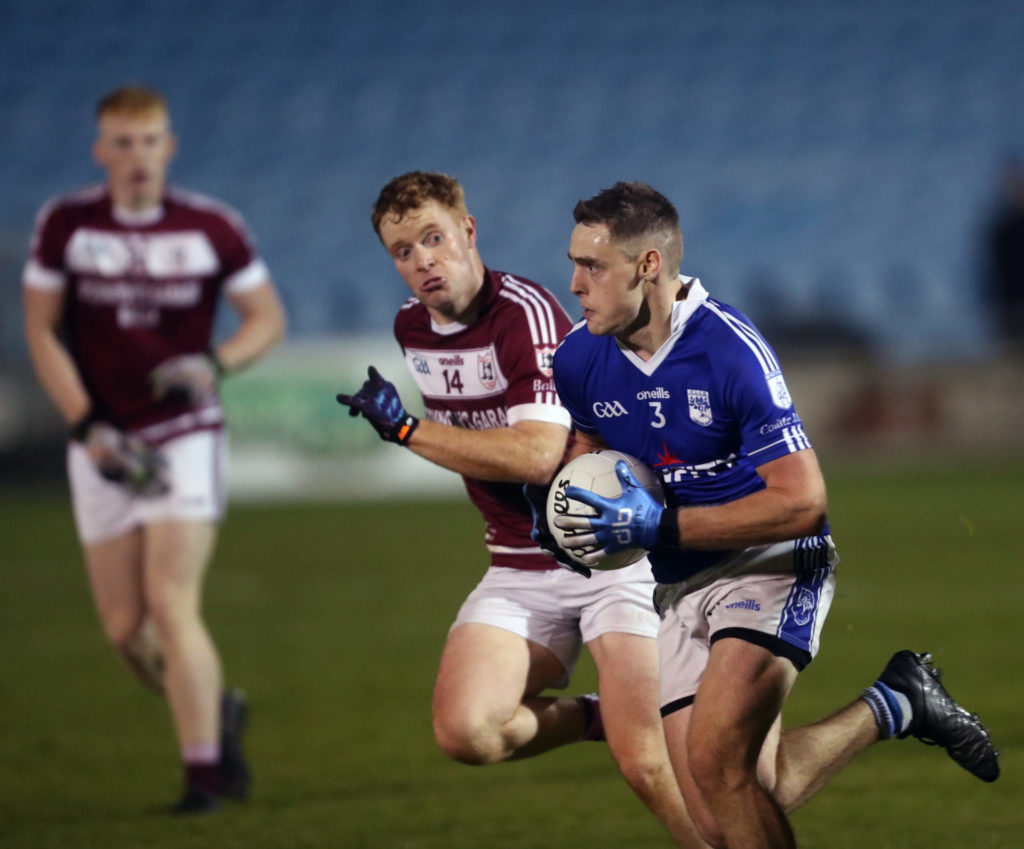 Kiltimagh full-back Donovan Cosgrove breaks out of defence watched by Balla’s Conor Walsh during the final of the Mayo IFC. Picture: Michael Donnelly

The day — as so frequently was the case this summer — was one borrowed from winter; the sky was on the floor, the rain was sideways and the car door would have been whipped from its hinges had you been so reckless as to let go. And then there they appeared, like Gorillas in the mist, mountains of men bedecked in their club black, bounding down from the slopes with all the urgency of fellas trying to make last orders in Campbell’s.
They were some of the players of the Kilmeena junior football team and were after running up and down the Reek, their hurry being to end their club’s eighteen-year wait for a Mayo junior championship. It typified the level of commitment submitted by the Clew Bay outfit during this shortened season and yet when all was said and done, their hard work still fell agonisingly short as they came within full-back Conor Madden’s last-ditch kick of forcing extra-time in a thrilling county final. It had been a huge blow to the Magpies, and particularly to the player, when wing-back John Keane had his county final terminated after only eight minutes after he succumbed to an injury sustained in an accidental collision during the early exchanges, but in finally lifting the McDonnell Cup, Kilmaine had scaled a mountain of their own. It was some burden to shoulder when last season the Green and Red went and proved themselves good enough to win the Connacht championship but not the Mayo one, having lost two county finals in three seasons (Are you taking note Kiltimagh?).
Only when Madden’s skyscraper sailed inches outside their upright, in the eighth minute of second-half stoppage time, could the men from South Mayo finally breathe easy in the knowledge that they were returning to the intermediate grade from where they were surprisingly relegated by Tourmakeady in 2016. You’d miss the Championship already.