A breakdown in the number of confirmed cases of Covid-19 by Local Electoral Area (LEA) revealed that the Ballina LEA had nearly twice as many cases as any other LEA in county Mayo from the middle of September to the last week in September.

In the two week period between September 14 and September 28, there were 15 cases of Covid-19 confirmed in the Ballina LEA. The Ballina LEA spans from Brackloon in the south-east of the Municipal District, up to Lacken in the north, taking in areas such as Kilfian, Crossmolina, Ardnaree and the Ballina Urban area. 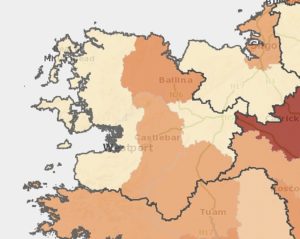 The next most affected area is the Castlebar LEA, which recorded eight cases in the same period of time. There were seven cases recorded in the Claremorris LEA. There were less than five cases reported in each of the Belmullet, Westport and Swinford LEAs.

The incidence rate per 100,000 population in the two-week period is highest in the Ballina area at 59.7. The rate in the Castlebar area is 26.7, while the figure is 25.8 in the Claremorris area.

Mayo has recorded 40 new cases overall in the two-weeks leading up to October 1, according to data from the HSE Covid Tracker App. The latest update from NPHET yesterday, showed an additional six cases reported within the county.

For a proportion of notified Covid-19 cases, their location on the updated LEA map may reflect their place of work rather than their home address. Confirmed cases have been geo-coded and allocated to Local Electoral Areas (LEAs) by the Health Information Unit (HIU) at the HSE. Approximately 95% of all cases can be geo-coded.