A breakdown of recently confirmed cases of Covid-19 shows that the Castlebar Local Electoral Area (LEA) had the highest number of cases over a two-week period in September.

In the two weeks between September 8 and September 21, there was 10 cases of Covid-19 recorded in the Castlebar area. The Castlebar LEA spans the rural and urban areas of the town of Castlebar, as well as villages and towns such as Balla, Ballyvary, Partry and Pontoon. 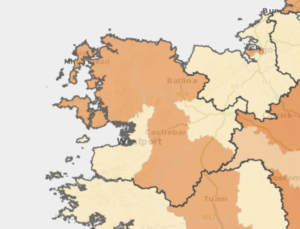 The next most affected area of the county is the Ballina and Claremorris LEA’s, which both recorded seven cases in the same period. The Belmullet LEA recorded six cases, with less than five cases recorded in both the Westport and Swinford LEA’s.

The incidence rate per 100,000 population is highest in the Belmullet LEA, where it is 47.6. The rate in the Castlebar area is 33.3, while it is 27.9 in Ballina and 25.8 in Claremorris. There is no incidence rate available for the Westport or Swinford LEA’s, as both have recorded less than five cases over the relevant period of time.

Mayo has seen a steady rise in cases in the past two weeks. According to the HSE Covid-19 Tracker App, the county has recorded 42 new cases up to September 25. Neighbouring county Galway has recorded 121 new cases in the same period, with 14 recorded in Leitrim, 45 in Roscommon and 12 in Sligo.

For a proportion of notified Covid-19 cases, their location on the updated LEA map may reflect their place of work rather than their home address. Confirmed cases have been geo-coded and allocated to Local Electoral Areas (LEAs) by the Health Information Unit (HIU) at the HSE. Approximately 95% of all cases can be geo-coded.