With the 2020 Mayo senior football championship having drawn to a close and the Moclair Cup resting in Knockmore for the winter, it’s time to cast an eye back over the season that was and compile the Team of the Championship, a selection of the best and most influential 15 players in their given positions from the 16 teams and 34 matches that comprised the 2020 campaign.

Our team of reporters had eyes on every single one of those matches and this selection represents the players we believed shone the brightest.

We have tried to select players in the positions in which they spent the majority of their playing time. Unsurprisingly, county champions Knockmore are the most-represented club on the team, with finalists Breaffy second, semi-finalists Ballina Stephenites and Westport next and quarter-finalists Ballaghaderreen and Ballintubber with one player apiece.

Some players, like Knockmore’s dazzling Darren McHale and the reinvigorated Conor O’Shea, were automatic picks here but there were some agonising calls to be made in other positions. While a list such as this will always be subjective and a consensus on all 15 positions is practically impossible to reach, we are confident that each of these players have earned their places on the Team of the Championship. 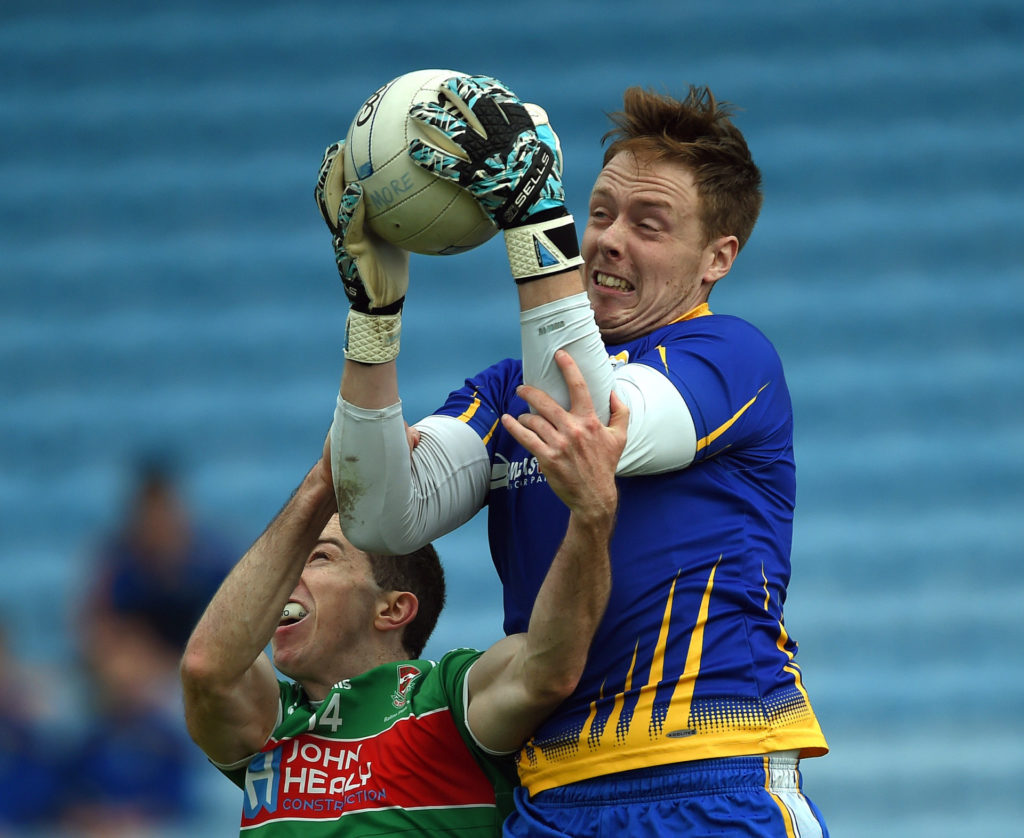 The clear choice here. Reape’s reinvention as a goalkeeper was one of the most significant factors in Knockmore’s county title win. The forward-turned-stopper conceded just one goal in six championship games (that in the group stage loss to Ballina) and his monster kick-outs were the platform for countless Knockmore attacks.

Drake’s performances in the group stage, where he was a dynamic, canny presence in the full-back line as Ballaghaderreen came through with a 100 percent record, earn him a spot at corner-back. It was no coincidence that his early departure in the quarter-final after a nasty blow to the head coincided with Ballagh’s decline against Breaffy. 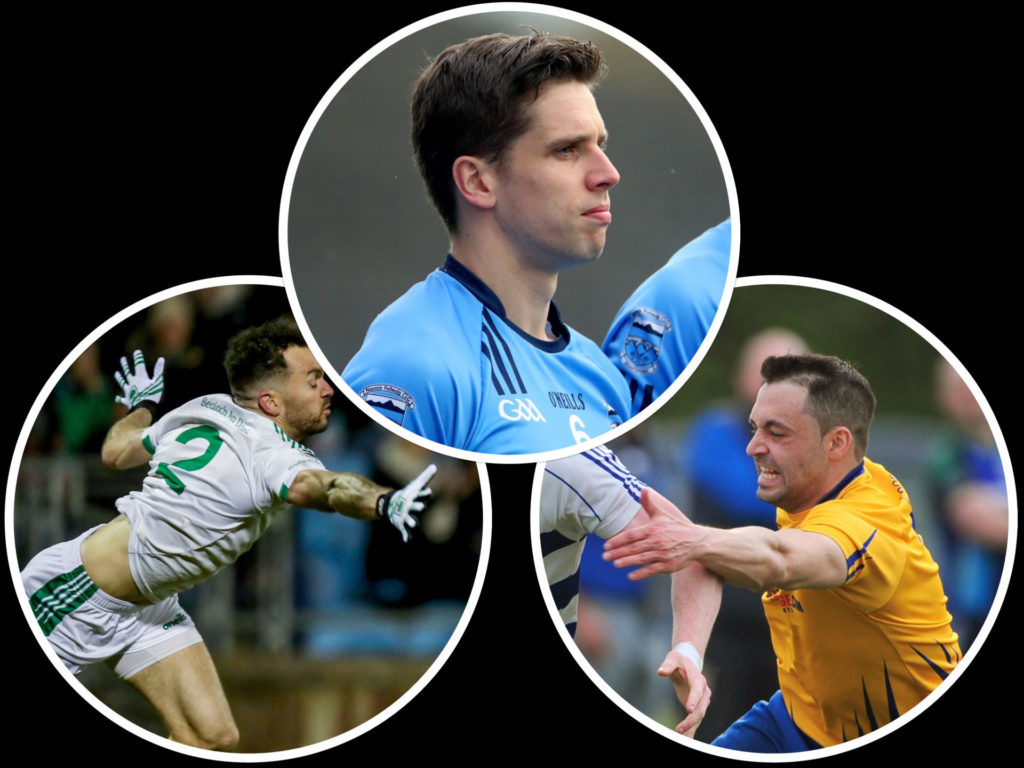 Keegan could arguably have gone into the half-back line or even into midfield but it was in the full-back line that he did his best work this year, most notably in Westport’s two matches against Breaffy, when he twice went head-to-head with his county colleague Aidan O’Shea and probably edged the duel on aggregate. Still the best pure man-marker in Mayo.

Steady as a rock in a stout and unfussy Knockmore full-back line that never looked like conceding goals. The long-serving Stadler had probably his best game in the county semi-final when he effectively nullified the in-form Evan Regan. One of the first names on Ray Dempsey’s team-sheet throughout the campaign.

Morrin was an ever-present in a Breaffy defence that was chopped and changed throughout the campaign due to suspension and injuries, and was a model of consistency in both a defensive and an attacking sense. His performances against Charlestown in the group stage, when he kicked three points, and Ballaghaderreen in the quarter-final, when he bagged a late goal, were particular highlights. 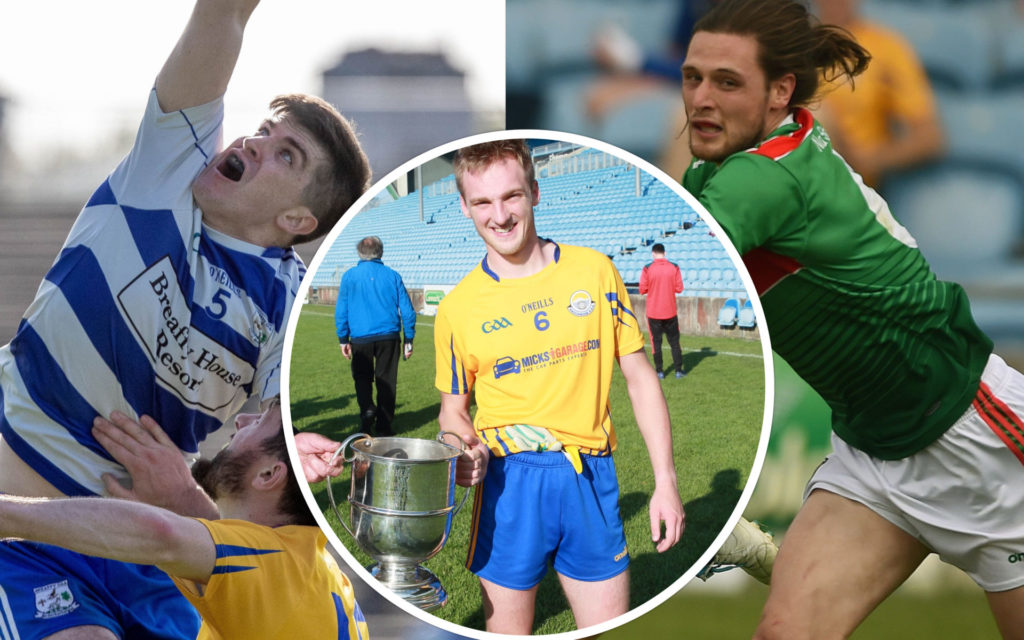 Arguably the breakthrough player of the entire senior championship, King was a revelation at centre-back for the county champions. Diligent, smart, tough as a pair of old boots and more than able to contribute to the attack when the chance arose. King, still eligible to play under-21 with his club, topped off a great year by holding his own against Aidan O’Shea in the county final.

‘Swanny’ embellished his fast-growing reputation as one of the most skillful and dogged defenders around as he chewed up a string of attackers on the Stephenites’ run to the last four. Was Ballina’s go-to man-marker as they topped their group and did a number on a free-scoring Fergal Boland in the quarter-final win over Aghamore. Did his utmost to hold back the tide almost single-handedly in the semi-final loss to Knockmore.

Nobody in Mayo needs to be sold on McLoughlin at this point; the county star was the heartbeat of Knockmore as they ended their 23-year wait for Moclair honours. Intelligent, creative, tireless – all the attributes he’s been showing for the last decade came to the fore – with his brilliant performance against Ballina in the semi-final a particular highlight. 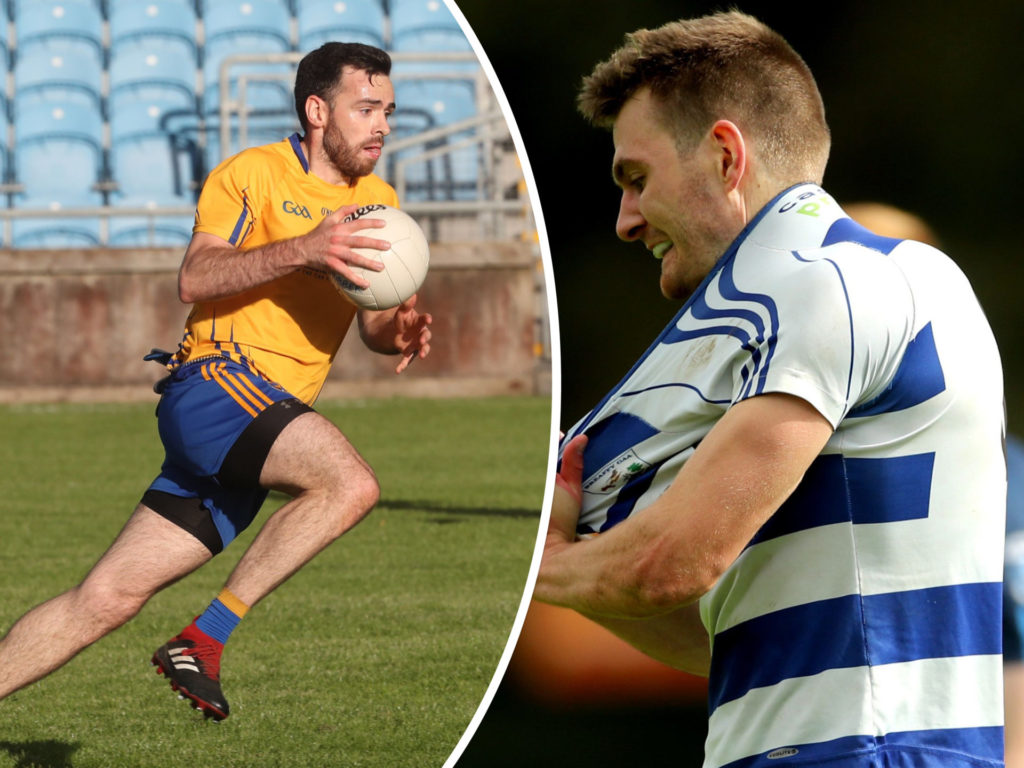 Kevin McLoughlin (Knockmore) and Conor O’Shea (Breaffy) form an unlikely yet deserving pairing as this year’s best midfielders in the Mayo SFC.

There was an argument to be made for the inclusion of his clubmate Mattie Ruane but Conor O’Shea gets the nod in the middle of the field after a championship in which he played probably the best football of his career so far. A key component of a Breaffy midfield unit that dominated practically every team they faced and also a heavy contributor to the scoreboard from both dead balls and open play..

Westport’s attacking riches was one of the biggest stories of the championship this year and while Killian Kilkenny, Kevin Keane and his brother Colm also impressed, Mark Moran was the standout. Was centrally involved in everything good Westport did going forward, especially in the quarter-final win over The Neale. One for James Horan to keep very close tabs on. 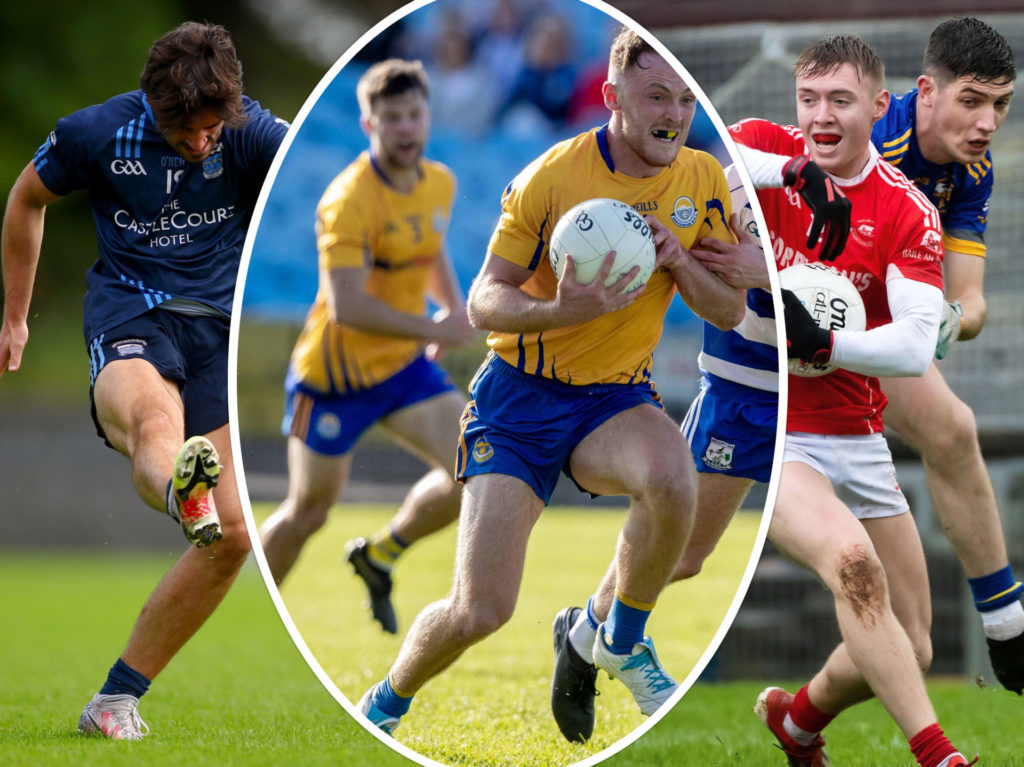 Mark Moran of Westport, Knockmore’s Darren McHale and Bryan Walsh of Ballintubber caught the eye of the selectors of the Western People’s Mayo SFC Team of the Year.

The county final man-of-the-match and quite possibly the player of the entire championship. McHale shone all the way through (his two goals against Ballintubber in the quarters effectively knocked out the reigning champions) but the way he put Knockmore on his back and turned the tide in the third quarter of the county final will live a long time in the memory. A county recall should be in the offing.

Ballintubber never quite hit the heights as their bid to claim a third title in-a-row hit the rocks in the last eight but Walsh was one of the best performers of the championship up to that point. Excellent in the wins over Moy Davitts and Davitts, he is a rare example of a hard-running half-forward who can also be relied upon to chip in with a couple of points every time he goes out.

When Ballina were generating attention as potential county champions-in-waiting, most of that talk was on the back of the scoring of a rejuvenated Evan Regan. Outstanding through the Stephenites’ 100 per cent group campaign and the quarter-final win over Aghamore, and it was telling that when he was crowded out in the semis, it cut the Ballina attack down at the knees. 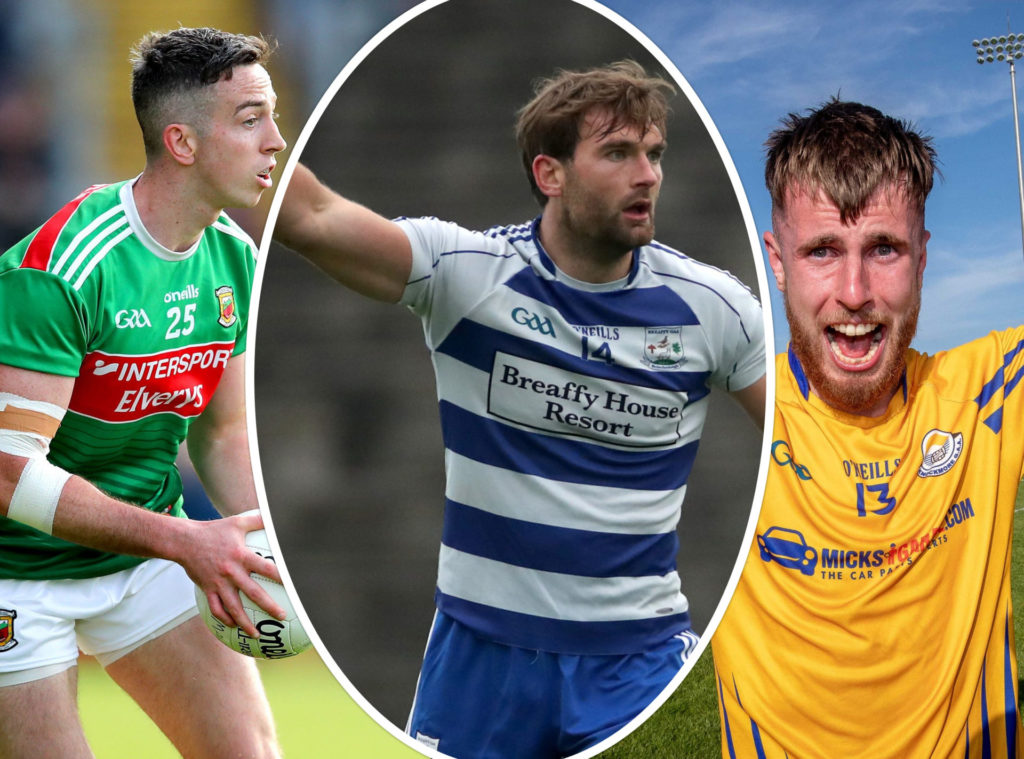 Ballina’s Evan Regan, Aidan O’Shea of Breaffy and Knockmore’s Peter Naughton each led their team’s superbly from the full-forward lline.

We’ve become so accustomed to it by now that the impact O’Shea has in pretty much every game he plays can be taken for granted. Absolutely seismic in Breaffy’s season-igniting win over Castlebar Mitchels and drove the side through battling wins over Ballagh’ and Westport to reach the final. You just hope that his and Breaffy’s day in the sun will eventually arrive.

Naughton and his partner-in-crime Aiden Orme (who was very unlucky to miss out on a place here) became by-words for Knockmore’s attacking edge through the campaign. Scored heavily in the group stages but also showed his commitment to the team by fulfilling a deeper, more work-heavy role at times in the knockout stages as Knockmore went all the way. 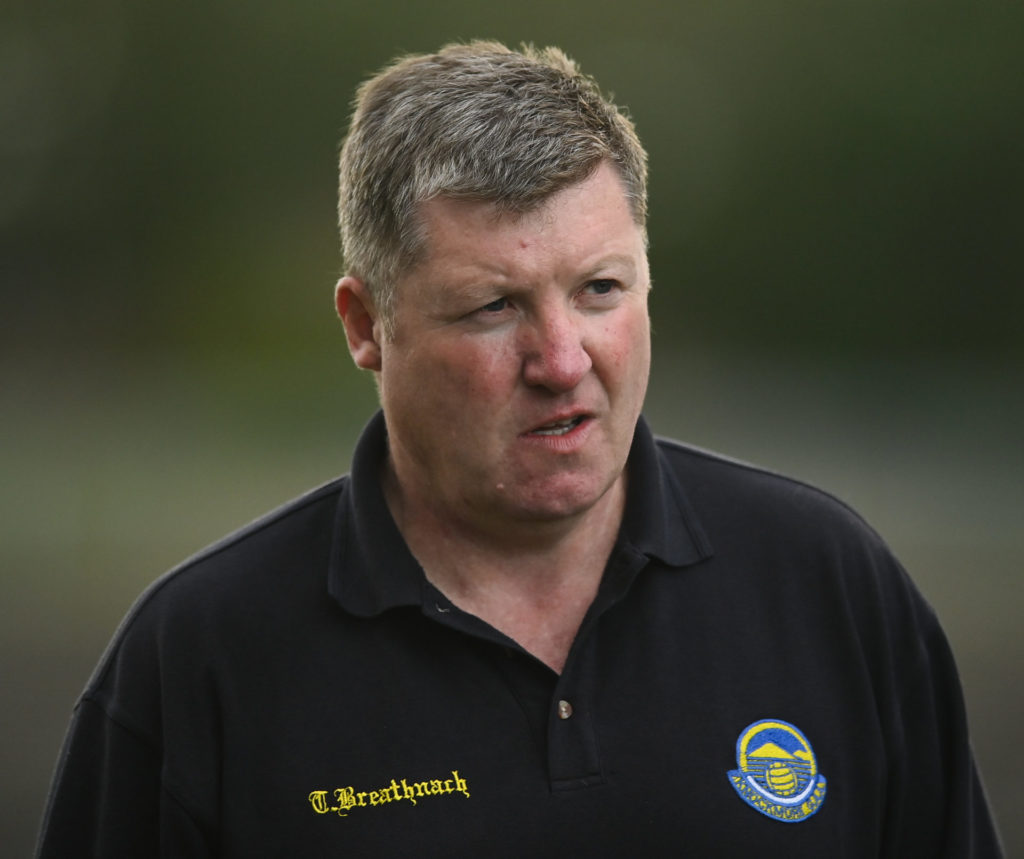 Dempsey took a punt on youth this year, throwing players like Kieran King, Sean Holmes, Conor Flynn, Orme and his own son Connell straight into the starting team and backing them to blend with Knockmore’s established core. The result was a first county title since 1997 for the Parish of Backs. The former Mayo manager also displayed his tactical nous with some canny in-game decisions that ultimately paid handsome dividends for the North Mayo men.