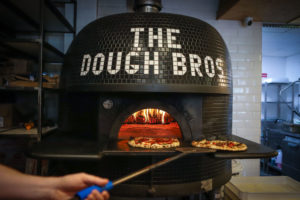 Two brothers with Swinford roots have had their pizzeria named as one of the Top 50 in Europe, in a list described as “the pizza worlds Michelin Guide”.

Eugene and Ronan Greaney, aka the Dough Bros, have gone from strength to strength since starting the business five years ago, initially from a food truck.

They later settled into their new home on Middle Street in Galway City and their unique brand of wood-fired pizza has seen it named at 21 in the list of Top 50 Pizzerias in Europe at a ceremony held in Milan. The brothers are the sons of Eugene Greaney and Eileen Irwin from Swinford and were pleasantly surprised by their place on the coveted list. They are also the first west of Ireland restaurant to be named on the list. 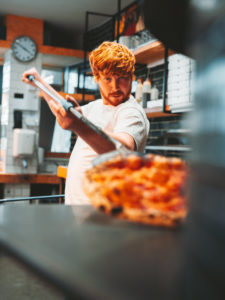 Eugene Greaney keeping his eye on the pie

“We were visited unannounced at our restaurant on Middle Street. Upon that visit we were unknowingly judged on the pizza, the ingredients, the execution of the cooking and also the standard of service, experience, beer and wine list,“ explained Eugene.

The awards in Milan could not go ahead but the organizers opted to celebrate via a live stream instead.

“We were all naturally devastated not to be travelling to Milan, to meet our peers and to experience this brilliant moment for us, our families and our business. But we decided we would not let the big night pass us by. We were adamant to mark this massive international award with those that have been there from the start.”

The Dough Bros went all out, and created their very own black tie, formal event. The location of course was their own family home and with their Tux’s on from Galway Institution for formal wear Martin Feeney, the lads were ready to tune in online and find out just where they were ranked in the Top 50 Pizzerias in Europe. 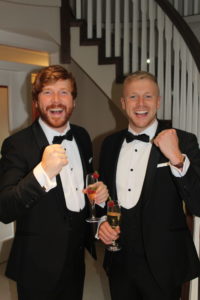 The Dough Bros on their big night, celebrating at home in lieu of a trip to Milan

“We rented tuxes, borrowed a projector from mates, had a slap-up meal with plenty of wine and watched the countdown live with family and loved ones on the big screen. To be in the TOP 50 was a lifetime achievement in itself but to be named at no 21 was something we are incredibly proud of. It’s a huge win for The Dough Bros but also for pizza in Ireland and Irish food in general. These awards rarely pass Dublin so it’s a huge win for the west too. Our goal was to revolutionise pizza in Ireland and put Irish Pizza on the International map, and it feels like we have done that.

“Instead of being in Milan, we were at our home house, where it all began with the food truck, with family and loved ones who all helped us make it in the early days. Just 7 years ago we were in a food truck at Farmer’s markets so to see our name called at no 21 in Europe was a feeling and a night we will never forget,” said Eugene.