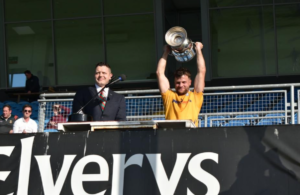 The Paddy Moclair Cup is on its way to the Parish of the Backs for the first time since 1997 after Knockmore beat Breaffy in the Mayo Senior Championship Final by two points this afternoon in MacHale Park.

An early Darren McHale goal proved crucial in the outlook of the scoreline but Breaffy found their way into a two-point lead at half time. Tommy O’Reilly and Mattie Ruane had been in fine scoring form for the opening half, contributing 0-3 and 0-2 respectively in the first half hour of play.

It was a slow enough half, with the usual dangermen from both sides Conor O’Shea and Kevin McLoughlin being kept quiet, although O’Shea did get a point. His brother Aidan meanwhile, was locked into a battle with Kieran King.

Aidan Orme received a black card for Knockmore with about five minutes remaining in the half, although they had already struggled for scores in the first half, with their last score of the half coming after 13 minutes.

The second half truly sparked the game into life after a middling first half, with both teams regularly scores and control of the scoreboard. Darren McHale provided vital for Knockmore, putting away four points in the second half with Peter Naughton also making some key contributions. Naughton pumped his fists when he put over Knockmore’s final point, but it was still too early for them to pop the champagne cork just yet. 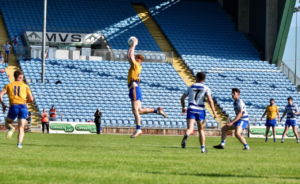 Aidan Orme of Knockmore reaches for the ball

Breaffy had some chances to cut the two point gap in the closing stages, in particular through Tommy O’Reilly, whose close range free swinging wide was not representative of his overall, strong attacking performance.

In the end, it was the Saffron and Blue who picked up the win and came away with the Moclair Cup, their first Senior county title in 23 years.

See Tuesday’s edition of the Western People for comprehensive reports, reaction and analysis on all of this weekend’s County Final action.