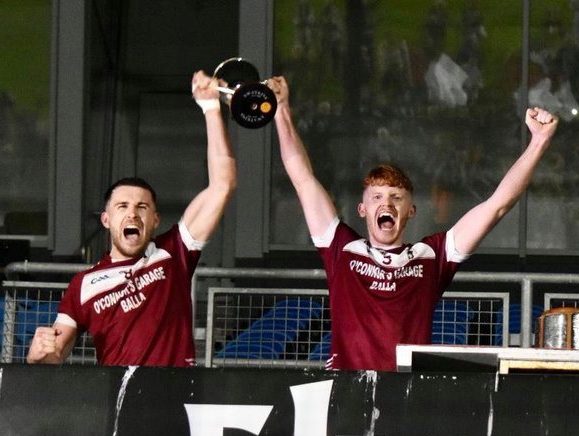 Two years after winning only their second ever Mayo junior football championship title, Balla are headed for the senior ranks after winning Saturday night’s county intermediate championship crown – the first time in their history they have lifted the Sweeney Cup.

In what was a richly deserved albeit a hugely surprising win, Ger Butler’s team overcame neighbouring Kiltimagh by 1-8 to 0-7 in MacHale Park.

As a spectacle, this was a quite disappointing affair, not that Balla will care one iota. In victory, they delivered what is Kiltimagh’s third intermediate final defeat since 2016.

The Blues were a pale shadow of the team that had steamrolled over title favourites Hollymount-Carramore and Crossmolina in the semi-final and quarter-final respectively, and they went the entire first half without raising a flag from play.

Balla led 1-3 to 0-3 at the first water break thanks to a brilliantly taken goal from corner-forward Aaron Walsh who fetched Colm Murphy’s left wing delivery and finished emphatically past Kiltimagh goalkeeper Jamie McNicholas. Murphy’s accurate free-taking helped the underdogs extend their lead to four points at half-time, 1-5 to 0-4.

Kiltimagh turned in an improved third quarter performance, scoring all three of its points to narrow their arrears to the minimum margin and tee up the remainder of the match superbly.

Balla were in danger of retreating into themselves and were fortunate that their goalkeeper Mattie Flanagan kept out a rasping shot from Kiltimagh sub Jason Forkan. However, they rediscovered their earlier attacking style just in time, whereas Kiltimagh became very wasteful once again and extended their wides tally to thirteen.

Points against the head by Barry Duffy, Val Roughneen and man of the match Gary McHale eventually saw the West Mayo outfit to a memorable victory.