A news segment about the newly installed mural of Joe Biden in Ballina recently appeared on NBC News, an American international news network, showcasing the Mayo town to the networks 10 million followers and viewers.

The mural of the 77-year US Presidential candidate was installed just under three weeks ago, recognizing the Democratic candidate’s Irish roots; Mr Biden’s great, great, great grandfather, Edward Blewitt, emigrated to the US from Ballina over 160 years ago. 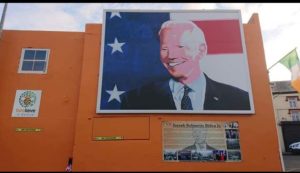 The mural to US Presidential candidate Joe Biden, which was the subject of a recent NBC News segment

Local Councillor Mark Duffy said of the segment; “Ballina is on the map to the over 10 million followers of NBC News. Well done to everyone involved including Suas Drones for capturing the brilliant footage of Ballina.”

The NBC news segment can be watched via their Facebook page at this link.