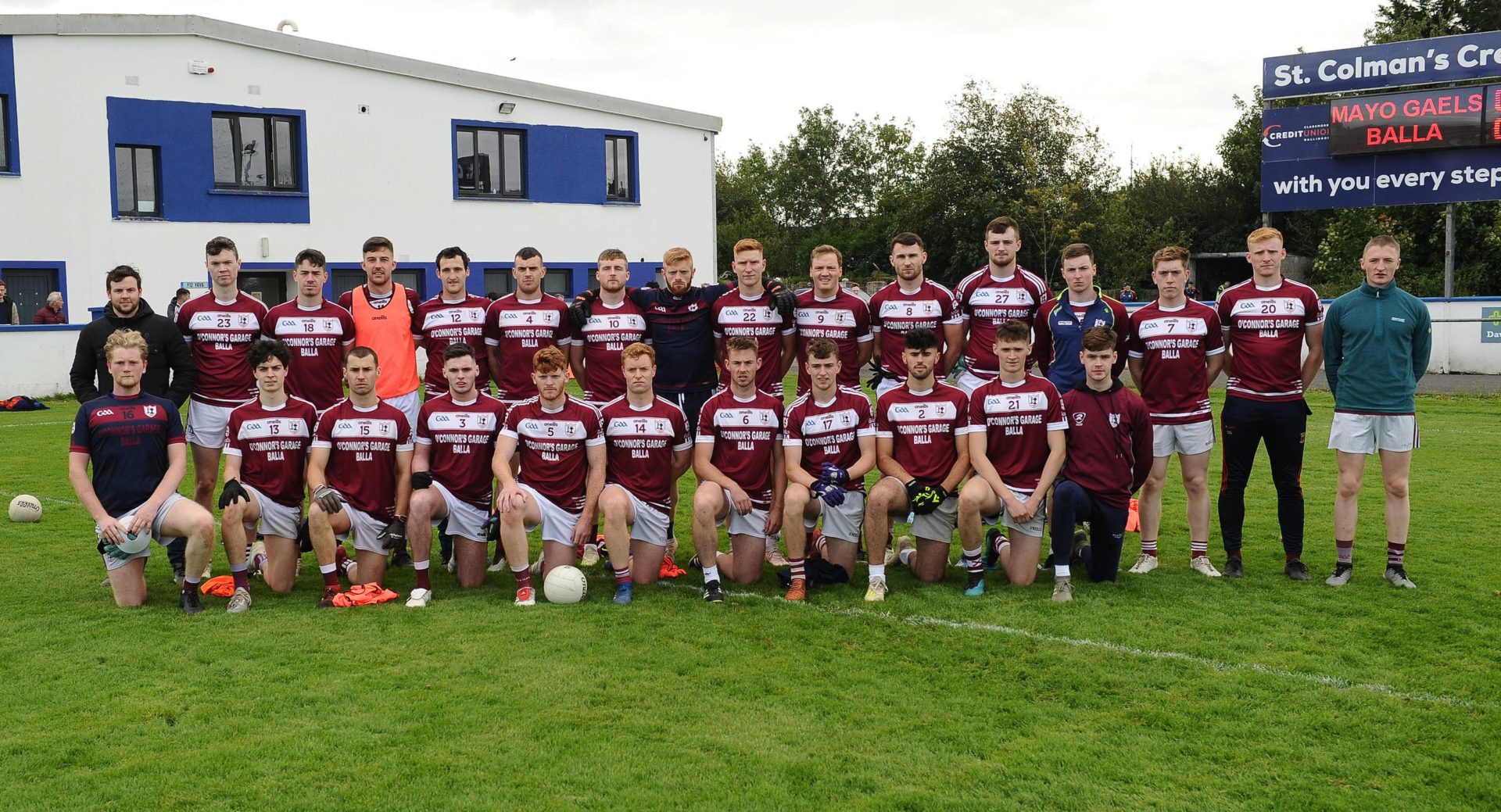 The Balla team that will contest the county intermediate final against neighbours Kiltimagh on Saturday night. Pictures: Conor McKeown

For a club starved of success only a few seasons ago, a return to senior football will have felt utterly absurd, almost as ludicrous as the onset of a bat plague that could shut down the world. But, sure look, these things can happen.

The likelihood of a young and ripening Balla side fading away however, as we hope will yet be the case with this unpredictable pandemic, is more unlikely than their unforeseen rise to the brink of senior football. Because despite a junior title, followed by a Connacht championship campaign and now an intermediate final on Saturday to soak up, this feels like the beginning of a journey for the club and its followers.

Toilsome years at the coalface aren’t clawing at temperaments for a start. These aren’t John the Baptist-like figures, hirsute men with the years of grind chiselled on to their skin, hoping to experience even just one glorious day. Instead, here they are, all boyish features and youthful exuberance, the world at their feet, much to the disdain of the curmudgeons among us.

Can you blame us?

Young lads jumping the queue, oblivious to the heartbreak and suffering and every manner of defeat to eat away at the soul.

Just look at their forthcoming opponents, masters of perseverance and consistency in their own right, though just failing to clamber above their own very Everest: an intermediate title and, with that, a coveted ticket onto the Moclair carousel.

In pretty much any other context, winning a county title in an echoing MacHale Park would be a sombre affair for a small, rural club such as Balla. But that’s not exactly the prospect facing the club. In their case more triumphs are imminent, if not this weekend then in the very near future, and the club can look forward to a decade of prominence if only achieving a sliver of the potential they’re showing at present.

There’s a realisation that has become salient over the past twelve months, much longer for the true connoisseurs of the Mayo club scene, that suggests Balla are the up-and-coming side, on a rise so vertiginous it would turn a Sherpa acrophobic.

Obvious comparisons are already being made with the team of the early 1990s that bounced on from attaining senior status in ’91 to come within three points of Castlebar Mitchels in the 1993 senior final. That Castlebar outfit were en route to an All-Ireland final with Nemo Rangers later that season, as it happened.

Balla had started very nervously in that game, as was acknowledged by the Mayo manager after the game.

“Their backs were under a lot of pressure in the first half,” said an eagle-eyed Jack O’Shea, on the look-out no doubt for fresh talent and form.

“Though Balla showed great commitment and heart in the second half and knuckled down well, they lacked penetration up front,” he added.

“They didn’t have the scoring forwards. They shot the ball from too far out and didn’t try to get the ball into scoring positions.”

Had Tommy Higgins kept his feet out of the square in the fifth minute of the final though, it can be safely assumed that those nerves would have dissipated much earlier in the day. Alas, the goal was disallowed, a dull final played out and Mitchels fell out on the right side of the result leaving Balla to ponder what could have been. That was to be the apogee of that star-studded side’s journey, one that had already been ploughing championship furrows for a number of years. 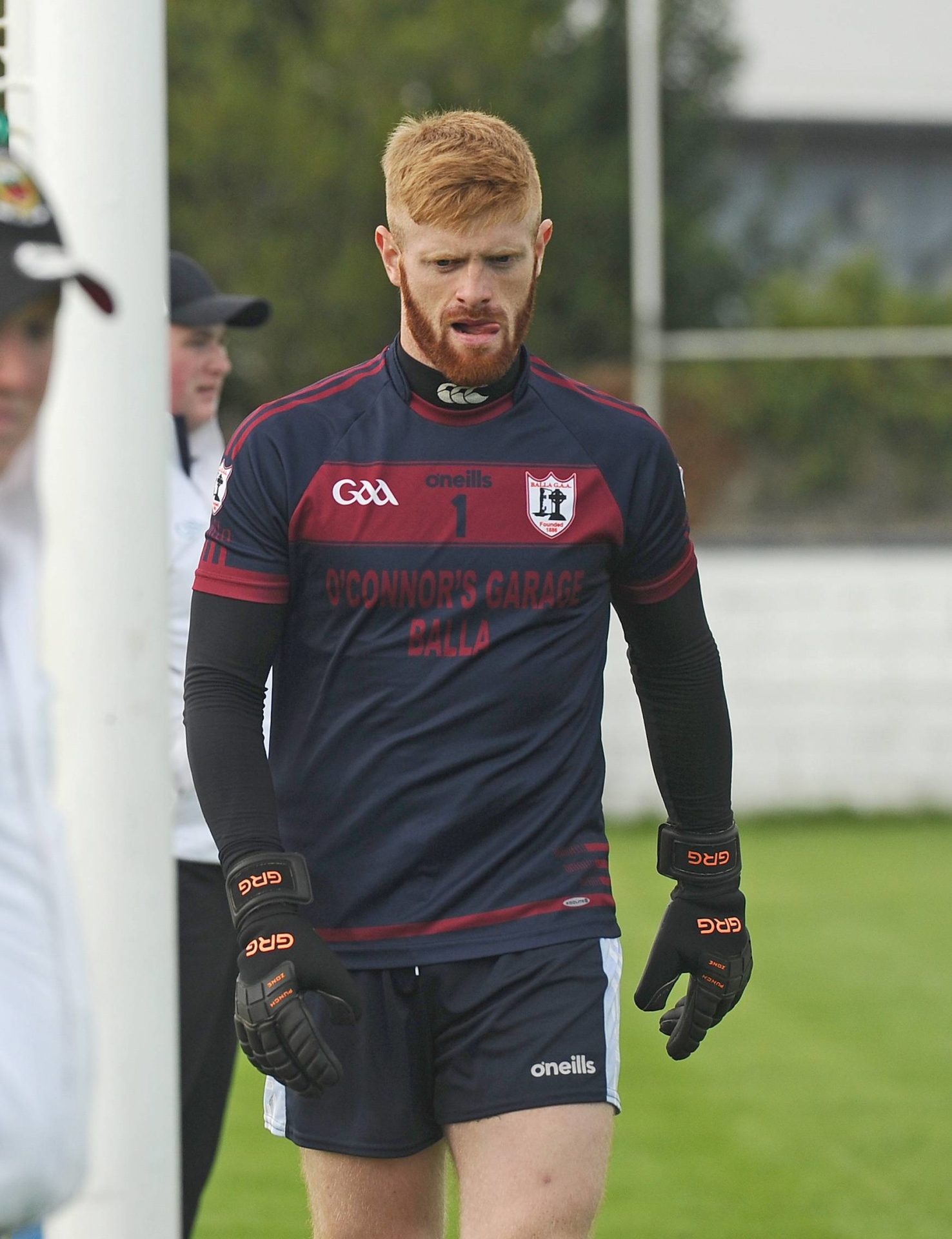 But drawing parallels can be a futile pursuit. As Teddy Roosevelt said, “comparison is the thief of joy”, and to begin contrasting teams of different eras would be to rob sport of its very essence as a pursuit to be either savoured or berated at that particular moment of time. That the current squad has already been mentioned in the same sentence as a team of Kilgallon and Fallon and Sheridan and Golding is a tribute in itself without considering the possibility of, dare we say it, going beyond their very achievements.

Whatever happens on Saturday, Balla are buckling in for the ride of their lives.

There will be more good days for the club and its people. There will be titles and triumphs to match any from the past. There will be chances to bathe in all of the glory, to fall out of the Rendezvous and into the Olde Woods, to light fires in the square and drink champagne on the green. There will be a time when the round tower and the street will be garishly festooned, every window in the hamlet a maroon and white shrine. And there will be times when rivals will consider bypassing the village, when the very sight of the colours sees them break out in a sweat.

Present circumstances have robbed the parish of this bubbling excitement but, with time on the side of a developing team, it’s hard not to acknowledge another build-up coming very soon.

It’s exactly these feelings a club of their history should provoke anyway. They’ve endured their fair share of famines but they’ve always been, right back to the establishment of the now global institution.

For decades, they’ve seethingly stood watching the convoys, singing their songs and sitting on horns, heading for the night of beer and revelry elsewhere. Their central location meant they were always subject to the joy of others as they sat over their dregs, wondering when and where and how their time would come. Could they ever live up to the century-old tradition?

To add to the heartbreak, the inter-county game brought its own impact. When fans of Roscommon or Galway or whoever was in town felt like breaking the journey for a celebratory drink, Balla wet their whistles and took one for the county. The village watched and learned. And when their time comes they’ll now know how to feast.

Maybe that time will come this weekend. Maybe it won’t. But with this new regime imminent, hope has returned and faith restored.