New figures from the Health Protection Surveillance Centre (HSPC) show Dublin has a 14 day incidence rate of new cases of Covid-19 of 104.0, which is twice the national average of 53.0.

Over the past two weeks from September 1st to September 14th, a total of 2,524 new cases of Covid-19 have been confirmed in the country.

The number of those cases that lead to hospitalisation were 65, or 2.58 per cent of cases.

In terms of the number of cases associated with clusters, there were 893 according to the HSPC. Healthcare workers also accounted for 232 out of the 2,524 cases. 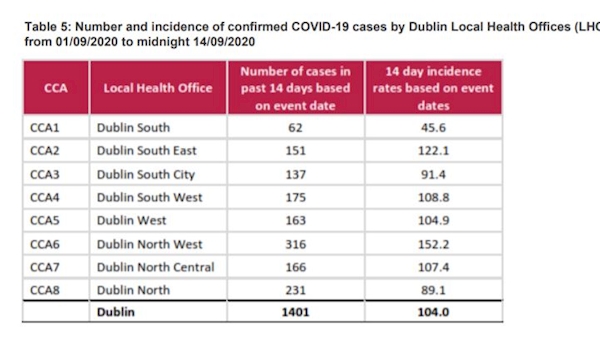 The median age for those who contracted the virus over that period was 33 years of age.

The age group with the highest number of cases during the 14 day period were 15-24 year olds, who accounted for 555 cases. The second highest age group were 25-34 year olds who made up 445 of the cases.

705 people who contracted the virus in the last 14 days had an underlying health condition.

The HSPC also said that 126 cases during the same period were travel related while over half (1,289) came from contact with a known confirmed case. 25.95 per cent of cases (655) were also from community transmission.

Concerns over spread of virus over Border into Republic

The Level Three restrictions people from Donegal will be facing

Man arrested in Dublin in connection with cocaine seizure worth €3.5m