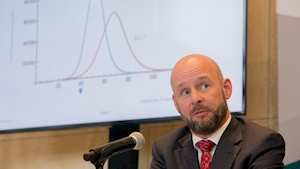 Professor Philip Nolan said contrary to recent commentary, many people are “underestimating both the effectiveness of surveillance in April, and the seriousness of the situation now.”

“We saw close to 1,000 cases per day at peak. Seroprevalence studies (the number of people in a population who test positive for a specific disease) suggest that for each detected case, there were 2 asymptomatic or mild cases not detected,” he said.

He said based on that data it shows a “highly effective surveillance by international standards,” and added that it is “all the more remarkable given the speed with which it was mobilized and the historic under investment in such systems.”

“We are doing close to 12,000 test per day now, expertly targeted by general practitioners and public health, with 2 per cent testing positive, so we are detecting a much higher proportion of cases, many of which are mild or asymptomatic,” he said.

Mr Nolan said mild and asymptomatic cases do matter and If not detected and isolated, they will transmit the virus to others which then fuels a growth in infections.

“We are seeing the level of disease growing again in Ireland, at a rate of 4 per cent-6 per cent per day and a doubling time of 12-18 days (incidentally, in the unlikely scenario where we do nothing to mitigate such growth, this would lead to 1400 – 3500 new cases per day at end October.

Speaking about cases in August, he said the vast majority of cases were in younger people. He warned that we will not be able to protect older people as the levels of infection in the community rise.

He concluded by saying “We need to prevent avoidable illness and death, but to reduce the risk uncontrolled spread in our community and major outbreaks in vulnerable settings. We owe it to each other to suppress the virus.”